Beware, a Conspiratorial Organization, with a Hidden and Divisive Agenda 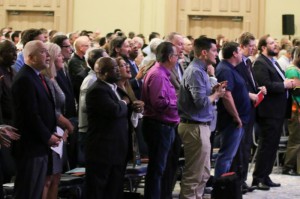 Dear Theophilus, many have undertaken to set down an orderly account of the events that have recently been fulfilled among us, … so I too have decided, to at least write an account of what a few wise progressives are pretty sure happened in Chicago at the Wesleyan Covenant Association (WCA) Conference. True, only one of the three actually attended the event, but they’re all confident in their analysis, and even in some of their prognostications.

First, let me report some of the most shocking details about the event. According to one of the progressive commentators, himself from a predominantly white annual conference, most of the people who attended the event were “white.” Imagine that, in a U.S. church that is 94 percent white, most of the participants present in Chicago were white too. Even worse, many of them were wearing “khakis and button shirts.” But here’s the really bad news, according to this analyst, a “prominent theme” of the conference was “submission to authority, whether Biblical or Spiritual.” And to prove it, the participants sang songs that “included, ‘On Christ the solid rock I stand.'”

What is very important to know dear Theophilus, is that according to these sage observers “the [WCA] is not what they [sic] present to be.” So, if you don’t “decode the language,” you won’t be able to see how dangerous they are. These clever WCA people, we are told, are “very disciplined in message management.” They even claim to be “centrists,” and – another shocker – their Chicago conference had a “common approach” with “recurring themes.”

Fortunately, one of our progressive reporters has the powers to cut through the WCA’s disciplined message management and he can even decode its language. It’s obvious to him that “in practice and in composition, the WCA continues the dividing and eroding of the centrist qualities of the [UMC].” Although he has no close relationships with the presenters, and probably has never personally met most of the WCA’s leaders, from his perch he’s certain its “conveners, elected leadership, and supporters come heavily from the anti-gay culture warriors of the past 40 years.” In his insular groupthink world, his mere assertion is all that is needed to make this case. No need for messy things like citations and evidence for proving his accusation.

To be fair, dear Theophilus, these liberal scribes report how concerned they are about the unity of the church and therefore are worried about the disunity being promoted by the WCA. As evidence of the WCA’s determination to divide the church, they report that the conference in Chicago reaffirmed the UM Church’s doctrinal statements, spoke warmly of its polity, and, to make matters even worse, invited those present to stand and recite the Nicene Creed.

Unlike many progressive United Methodists who proudly style themselves as proponents of unity, the WCA did not encourage people to pick and choose their 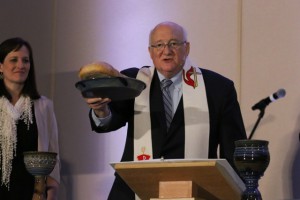 preferred UM Church teachings. It didn’t go on record saying it would defy the church’s covenant and the will of the General Conference. And, finally, it did not provocatively push for the election of a bishop that would bring the church to the very edge of separation.

True, two bishops did celebrate Holy Communion, and one of them brazenly proclaimed, “we preach Christ and him crucified.” So in short, the WCA stubbornly adhered to Scripture and the church’s teachings, which, when decoded, clearly means they’re trying to divide the church.

Fortunately, dear Theophilus, the most wizened among our three commentators responded most thoughtfully to the conference with, “meh.” She reports that she’s seen groups come and go, and a gathering of 1,800 United Methodists is just so many small potatoes. Unlike all of those other unnamed and un-cited “[UM] commentators” who according to her “are all agog over the official launch of the WCA,” she fancies herself an unimpressed H.L. Mencken, our very own curmudgeon with a keyboard. It’s a wonder she deigned to dedicate a whole article to the paltry, little gathering.

But she did. And she can hardly constrain her contempt for these rabble-rousers. “In reality,” she writes, “the WCA offers little more than a new wineskin dressing up a very old wine that has turned to vinegar.” Mencken, indeed.

By the end of her “analysis,” however, the WCA is apparently more of a threat than she initially indicates. She darkly worries that the “[WCA’s] organizers have set up sufficient mechanisms to create their own denomination.” The small group also reminds her of “the hijacking of the 2016 General Conference by conservatives forces. It’s entirely possible,” she warns, “the WCA and its followers [that measly lot of 1,800?] could seek to hold the denomination hostage.” Yikes.

Dear Theophilus, I am sorry if this account is disconcerting, but I just wanted you to beware of a bunch of khaki clad people singing “On Christ the solid rock I stand.” Be warned, “There’s money behind this.” And as Lucy said to Charlie Brown, “It’s run by a big eastern syndicate you know.”