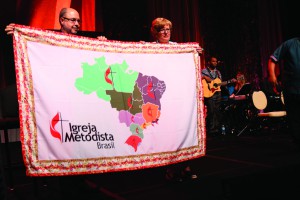 There’s no better place than a World Methodist Conference to witness the scattered seeds and deep roots of John Wesley’s approach to Christianity. Some 2,500 Wesleyan faithful, from 108 countries and 88 communions including The United Methodist Church, met in Houston for the 21st such gathering.

“John Wesley said the Methodists are one people throughout the world,” said United Methodist Bishop Scott Jones, who as newly assigned Texas Conference episcopal leader offered greetings at an August 31 opening service. “It’s in this conference, as we gather together from so many different places, that that unity becomes visible.”

The opening service may not have had Olympics-level choreography, but it did have a stirring parade of denominational banners — carried by groups from Nepal, Nigeria, and New Zealand, to name a few — as the crowd sang Charles Wesley’s “O For a Thousand Tongues to Sing.”

Prayers came from Bishop Paulo Lockmann, president of the World Methodist Council and a leader of the Methodist Church in Brazil, and from Archbishop Michael Kehinde Stephen, of the Methodist Church Nigeria. The music, led by Jorge Lockward of the United Methodist Board of Global Ministries, ranged from gospel to South American flutes to traditional church choir numbers, and included the crowd singing “How Great Thou Art” in their own languages.

For the Rev. Emerson Castillo, the opening service alone justified his journey from El Salvador. “I feel I understand how God can move between all of us even in our diversity and differences and cultural backgrounds,” said Castillo, who works for the Council of Evangelical Methodist Churches of Latin America and the Caribbean and leads a church in El Salvador. “Even though there were many languages represented, the spirit guided us as one church.”

The World Methodist Conference, in contrast to The United Methodist Church’s General Conference, is not about legislation, budgets, and other forms of church politics. Instead, it’s an occasion for people of the Methodist tradition to be together. The event featured daily worship services and teaching in a variety of formats.

For the opening worship, a conventional sermon was replaced by a dialogue between astrophysicist Jennifer Wiseman, a member of Deer Park United Methodist Church in Reisterstown, Maryland, and David Wilkinson, a scientist-turned-theologian teaching at St. John’s College, Durham University in England.

They rooted the talk in Psalm 8 (“When I consider thy heavens, the work of thy fingers, the moon and the stars, which thou hast ordained …”) but also projected images of distant galaxies and emphasized how the latest research underscores the vastness of the universe.

“I glean from this that the God we pray to is awesome,” said Wiseman. Wilkinson argued that Christians should welcome, not feel threatened by, the fast march of science. “It’s a gift to liberate; it’s a gift to heal; it’s a gift to instill in us awe and wonder,” he said.

The Rev. Rudy Rasmus, pastor of St. John’s United Methodist Church in Houston, touched on the segregation of his youth, the pace of technological change, and the need for the church to love sincerely, energetically, and without precondition if it’s going to avoid obsolescence.

He recalled how he came to faith well into adulthood at Houston’s Windsor Village United Methodist Church, thanks to the embrace of its pastor, the Rev. Kirbyjon Caldwell, and the congregation. “I could care less what the Book of Discipline said in that moment. What I really wanted to know was, ‘Do you love me?’” Rasmus said. But Rasmus, recalling how the local zoo was more welcoming than white churches in his youth, also challenged the audience to seek justice as it loves. “Love should be creating a disruption in your part of the world,” he said.

Professor fears church division is ‘a given’

The World Methodist Conference is, by and large, a feel-good event. But this one took a somber turn when one speaker frankly addressed the schism threat in The United Methodist Church over the issue of homosexuality.

The Rev. Ted Campbell, a United Methodist elder and professor at Southern Methodist University’s Perkins School of Theology, argued in his September 1 plenary address that the denomination cannot hold together. “The question at this point is not whether we divide or not,” said Campbell, standing under a “One” sign that signified the unity theme of the conference. “That I fear is a given now.”

Campbell’s talk brought a response from United Methodist Bishop Bruce R. Ough, president of the United Methodist Council of Bishops. The council was, at the direction of the 2016 General Conference, preparing to name a commission to study and consider revisions in church policies on homosexuality. “I think it’s helpful to have voices that are being realistic about how divided we are,” Ough said in an interview after Campbell’s talk. “At the same time, I believe it’s important that we not start the work of the commission making assumptions that we’re already divided and there’s no way back.”

Campbell used much of his talk for what amounted to a church history lesson, rooted in the old saying (often incorrectly attributed to John Wesley, he noted) that a church should have “in essentials unity, in non-essentials liberty, in all things charity.” Rupertus Meldenius, the 17th century Lutheran who introduced the phrase, meant the church should have unity in necessary beliefs, flexibility in other beliefs, and a charitable attitude regarding both.

Campbell noted that a large majority of delegates to recent United Methodist General Conferences have voted to uphold restrictive church law regarding homosexuality. “So this matter now has the functional status of an ‘essential’ or ‘necessary’ teaching alongside the teachings of the ancient church and the Reformation and the Wesleyan movement as something that unites and divides us,” he said.

Campbell pointed out that some United Methodist annual conferences disagree so strongly with church law on homosexuality that they have passed non-conformity resolutions. That includes ignoring the restriction against ordaining “self-avowed practicing” gay clergy. “When annual conferences declare that they will not follow the law of the church, I think that is in fact a division,” Campbell said.

Though his talk was scholarly, Campbell shared a story about a Perkins student whom he described as the school’s academic star and one whose commitment to prayer exceeded Campbell’s own and that of most other faculty. But the man eventually left school, understanding that his homosexuality would prevent his ordination in The United Methodist Church. “These problems are not hypothetical,” Campbell said. “They take the form of real human beings.”

Campbell asked the World Methodist Conference audience to pray for The United Methodist Church and offer it counsel and other support.

Ough said he approached Campbell — his friend for years — after the address to counter the view that the denomination can’t hold together. “I think it’s far more helpful, and also far more faithful, to assume that God’s imagination is greater than our impoverished imagination, and that if we surrender to that we might discover ways to be together that might look different, but nonetheless continue and affirm our unity,” Ough said.

One highlight of the conference’s last day was the presentation of the World Methodist Peace Award to the Rev. Jo Anne Lyon. She’s a former general superintendent of The Wesleyan Church denomination, but the award recognized her as founder and longtime leader of World Hope International.

She started that nonprofit in her home, and under her leadership, it grew into a major Christian relief and development agency, now working in 30 countries. The group has focused on bringing clean water and spiritual nourishment to communities, as well as providing holistic healing programs for post-war amputees.

Lyon herself has worked to raise awareness of human trafficking, and she represented her denomination on President Obama’s Advisory Council on Faith-Based and Neighborhood Partnerships.

“Seeking justice alone can become all political,” Lyon said. “But righteousness without seeking justice for others leads to isolation from the world. We find that balance including both justice and righteousness, rooted in the Bible and in our historical identity.”

In her plenary address, Lyon noted the power inherent in the 80.5 million people represented in the 80 Methodist, Wesleyan, and related United and Uniting groups that are part of the World Methodist Council.

“Eighty million of us. That’s a lot of folks, people!” she said. “And God can do a lot with us. And if we can get focused on the mission and vision God has for us, literally at this time in history the world can be turned upside down.”