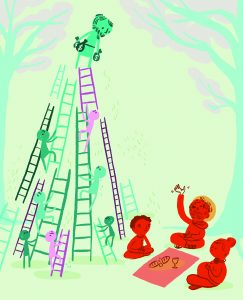 To the surprise of many, Jesus gave special, affirmational attention to the man Zacchaeus, who is identified in scripture as a chief tax collector (Luke 19:1-10). Because of his role as tax collector for the Roman treasury, Zacchaeus would have been hated by the members of his community. Tax collectors, and especially chief tax collectors, were known as what we might call white-collar thieves. These were men in power who made a habit of exploiting an unjust system – and specifically, the hardworking people living inside that system – for personal gain.

If you were a tax collector, government authorities would impose on you a quota for the amount of money you were to collect from citizens. Once your quota was satisfied, any further monies collected were yours to keep. This, of course, led most tax collectors to extort monies from citizens that were far above and beyond their actual tax burdens. To make matters worse, tax collectors lived opulent, self-indulgent lifestyles for all to see.

This helps us understand why tax collectors specifically were so despised in first-century Roman society. Who could feel anything but contempt for a powerful, self-serving crook?

We can safely assume that Zacchaeus had no one in Jericho he could identify as a friend or a fan. When he walked through the crowds and climbed up into a sycamore tree to get a glimpse of Jesus, he did so all alone (Luke 19:1-4). His aloneness in the tree seems to communicate his costly reality – one that is not uncommon for powerful people who’ve built their empires by taking advantage of others – though he has become rich, he has also become isolated.

The world looks at the likes of Zacchaeus and wants to judge, reprimand, and punish. Jesus, on the other hand, moves toward him, calls him by name, and offers to eat with him. Looking up at this lonely crook, Jesus says, “Zacchaeus, hurry and come down, for I must stay at your house today” (Luke 19:5).

A Good Name Given. In the chapter of Luke’s gospel prior to the Zacchaeus account, another more virtuous rich man encounters Jesus – a man we have come to know as “the rich young ruler.” Unlike Zacchaeus, he is a religious man who has likely made his money through honest means. He has attended the temple faithfully, is a pillar of his religious and civic communities, and has, by his own account, kept the law of God since the days of his youth.

We are told Jesus looks at the rich man, loves him, and says to him that if he really wants to live, if he wants to be rich in the truest and most enduring sense of the word, he should sell all he has, give it to the poor, and then follow Jesus. Jesus does not offer this prescription to the young man because he has too much money, but because his money has too much of him. Recognizing that he has great wealth, the young ruler decides that Jesus’ invitation is too much. So he turns around and he walks away sad.

Following this encounter, Jesus turns to his disciples and says, “How difficult it is for those who have wealth to enter the kingdom of God! … [I]t is easier for a camel to go through the eye of a needle than for a rich person to enter the kingdom of God.” The disciples respond incredulously, “Then who can be saved?” Jesus comforts them with a gentle answer, saying, “What is impossible with man is possible with God” (Luke 18:24-30).

So possible that another rich man – the lowly tax collector, Zacchaeus – receives salvation on the spot as he responds to Jesus’ gentle, surprising invitation. “Zacchaeus! Hurry, come down, for I must stay at your house today.” Once in Zacchaeus’s house, Jesus declares, “Today salvation has come to this house, since he also is a son of Abraham. For the Son of Man came to seek and to save the lost” (Luke 19:9-10).

Did you catch that? The very man society deems as unredeemable, Jesus identifies as a son of Abraham, the father of all who are faithful. Because this is what Jesus does: He takes a bad name and turns it into a good name. He says to the outsider, “You belong,” and to the outlaw, “Your sins will not be held against you,” and to the shame and regret that drove the sinner up into the tree alone, “I’m coming to your house today. And there, in your house and on your turf, Zacchaeus, I’m going to show you a love and a hospitality like you’ve never dreamed. For your house and your turf, from this point forward, are going to be my house and my turf. I’m going to rearrange your furniture. I’m going to be your new decorator – both interior and exterior. I’m not coming to your house so you can serve me, but so I can serve you; not so you can feed me, but so I can feed you; not so you can take me in, but so I can take you in.”

Jesus invites us to come to him as we are – “Zacchaeus! Come down from that tree. I’m coming to your house today!” – but this must never be mistaken for an invitation to stay as we are. As was the case with Zacchaeus, so it is with us.

When Jesus comes to our house, he doesn’t do so merely to take our side. He does so in order to take over. His “I do not condemn you” always leads to the imperative, “Now leave your life of sin.” He is not our consultant or adviser. He is not our personal assistant. He is our Lord. He has come to save us, and in saving us, to rearrange our furniture, to turn our house into his house, to become the interior and exterior designer of our lives, for the rest of our lives.

Consider Jesus’ ancestry – members of faith’s “hall of fame” who were simultaneously and seasonally saint and sinner, virtuous and terrible, selfless and selfish, faithful and prodigal. Noah faithfully built the ark, and he also got drunk. Abraham believed the promises of God and walked courageously by faith, and he also handed his wife over to sex-hungry men twice in order to protect himself. Jacob became the father of the twelve tribes of Israel, and he also lied to secure a birthright that belonged to his brother. Solomon was the wisest man on earth, and he was also a womanizer. Rahab valiantly protected the Israelite spies, and she was also a sex worker.

In the Gospels we again see this “simultaneously saint and sinner” dynamic among the friends of Jesus. A despised Samaritan is made the hero of one of Jesus’ most famous parables, as is a prodigal son who wishes his father dead and then squanders his inheritance on prostitutes and wild living. The religious folk disapproved of Jesus’ questionable friendships and regularly reprimanded him for being a glutton, a drunk, and a friend of tax collectors and sinners (Matt. 11:19). Though Jesus was never actually guilty of being a glutton, a drunk, a greedy man, or a sinner, he was suspected of all of these and more because of the friendships he kept. He was, we might say, guilty by association.

But if you are Zacchaeus, instead of being repelled by Jesus, you are drawn irresistibly toward him. There is something about his kindness, something about his gentleness that makes Zacchaeus and others who, like him, have made a moral train wreck of their lives want to come out of the tree and have dinner with him. If you are Zacchaeus, you don’t say in shock, “Jesus welcomes sinners and eats with them.” Instead, you say with wonder and awe and gratitude, “Jesus welcomes sinners and eats with us.”

This is the fundamental difference between human religion and Christianity. All of us, without exception, are hopelessly stuck and isolated in sin and selfishness – unless and until Jesus looks up at us in the tree, calls us by name, and tells us to hurry up and come down to him because he is coming to our house today.

Understanding this humbling reality, and letting it get massaged deeply into our hearts so that it reorients our posture, is an essential key to becoming instruments of God’s grace, peace, and gentleness in a culture of outrage.

Scott Sauls is senior pastor of Christ Presbyterian Church in Nashville, Tennessee, and author of numerous books. Taken from A Gentle Answer: Out Secret Weapon in an Age of Us Against Them by Scott Sauls. Copyright © 2020 by Scott Sauls. Used by permission of Thomas Nelson.