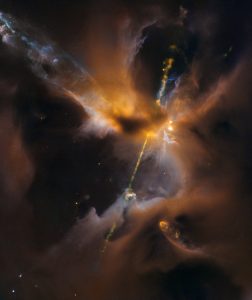 Awakening Newborn Stars. Lying inside our home galaxy, the Milky Way, this Herbig–Haro object is a turbulent birthing ground for new stars in a region known as the Orion B molecular cloud complex, located 1,350 light-years away. Photo courtesy of NASA.

It was a global health mess, an economic mess, a political mess. It messed up our events, our holidays, our plans, and our lives. Some lives were certainly more devastated than others, whether by illness or grief or financial devastation, but most people are emerging from 2020 a little battered, bruised, and tired of the unpredictable chaos in which we have been living.

Turning the page into the new year, 2021, feels almost like pausing a horror movie in the middle to grab a snack, then returning to wonder: “Is this story going to resolve, or will the horror only get worse in the next scene?”

We’ve certainly had our fill of mess in 2020. Most of us are crying: “Enough chaos, already! Let’s get back to the predictable, ordinary world we miss so much.” Instead of finishing the horror movie, many of us are tempted to change the channel entirely and see if there’s a syrupy, predictable RomCom on, something to distract and disengage.

What if chaos doesn’t have to lead to despair, but can lead to creativity? As those who worship the Creator God, we don’t have to look far to find reasons to engage rather than reject the mess we’ve been handed. Creating from chaos is a foundational part of who we are.

1. Chaos is often a sign that something new is emerging. We don’t have to look past page one of Scripture to find that chaos isn’t always a sign of disaster. It can actually signal a new start.

Genesis 1:2 tells us that even as God set about creating the universe we live in, “the earth was a formless void and darkness covered the face of the deep.” Tohu vavohu, the lyrical Hebrew words rhyme out the description: formless void.

This watery chaos, wild and waste, was the starting point of everything we know, everything we see, all because our Creator God has a gift for creating beauty from chaos. God forms order from chaos and fills emptiness. When He says: “Let there be light!” darkness vanishes, and ever since the light has shined in darkness and the dark has not overcome it.

God’s job description: order from chaos, fullness from emptiness, light from darkness, does not end on that first page. We find him engaged in these acts in every chapter of Scripture, and he’s still cleaning up chaos in every chapter of our lives. When Paul described it he got a bit dramatic: If anyone is in Christ… New Creation! (2 Corinthians 5:17) When Jesus comes onto the scene, it’s like our lives get turned back to page one. Chaos ordered, emptiness filled, darkness banished.

Here’s something worth holding onto, for everyone who will ever feel dark or danger, depression or deep distress, here’s where it becomes utterly clear on page one: darkness is not of God. It is separate from him. God is separate from the darkness, but he’s also present in it. He’s not frightened of it. He’s not afraid to walk right up to it and command it. Create from it. Darkness, which will haunt human history in many forms, is simply an ingredient to God. Chaos is something to be shaped and formed by him for the grander recipe to come.

For those who have come out of 2020 staggering and struggling, take heart: God is not confounded by chaos. When we see chaos, he sees the beginning of this original recipe: He simply sets about making all things new.

2. Chaos can inspire innovation. Einstein was supposed to have famously asked: “If a cluttered desk is a sign of a cluttered mind, of what, then, is an empty desk a sign?”

He certainly practiced what he preached.

On the day Einstein died, a journalist who heard the news of the famous scientist’s death rushed to the genius’s office to capture the scene of his work on his last day on earth. The surviving photograph shows a desk hidden under crumpled, disorganized papers, a bookshelf half-filled with books stuffed in sideways. In short: a disaster area. This, from the man who gave us simple yet intricate formulas that explained the nature of the universe. Cleanliness may be next to godliness, but it seems chaos and genius are next door neighbors too.

Psychologist Kathleen Vohs set out to research the question of whether a messy environment might spur more creativity, more problem solving, and more innovation than a spotless, sparkling workspace. She and her team organized two separate rooms in their laboratory. Or rather, they organized one and disorganized the other, with untidy, cluttered spaces and papers strewn about. Then they studied their subjects in two separate experiments.

In one, they determined whether the subjects selected an option marked “new” or “classic” (they were identical in description except for that one word.) Far more people in the messy environment selected the item described as “new.” The conclusion was that subjects surrounded by order chose convention, and those who were already disrupted by their environment chose novelty.

In the second experiment they gave subjects ping pong balls and asked them to brainstorm uses for them, listing as many functions for ping pong balls as they could come up with. While the subjects came up with the same number of results, the alternative uses named by those in messy rooms were much more creative and fresh in the odd uses they invented. It turns out that being subjected to chaos can actually make us more innovative and creative than an orderly environment.

You may be thinking: That’s definitely not me. I can’t work in a messy place. I need to have order, a clean desk, and everything sorted nicely before I can really begin. That may have been a great 2019 philosophy, but in 2020 it just wasn’t possible. Most of us experienced a disruption of our work, our ministries, our families.

The good news is that disruption is the mother of invention. The COVID-19 crisis has certainly given us plenty of chances to prove this hypothesis. Churches and ministries have had to go out of their way to discover new channels of ministry they would never have developed unless their normal routines were disrupted. Perhaps we can learn something from having the status-quo yanked out from under us. Chaos gives us the impetus we need to be creative, to launch new initiatives in new ways. 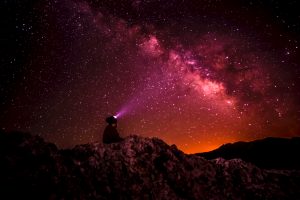 The starry night outside of Shahmirzad, located in the north of Iran and on the southern slopes of the Alborz Mountains. Photo by Manouchehr Hejazi.

3. You (yes you!) are creating from chaos all the time. If you are human, you are creative. You may not identify wholeheartedly with that title. Maybe you can’t even draw a stick figure or make an omelet. But as we walk through each day, we are all taking the vast world of raw material we live in and making something of it, making a life for ourselves out of what we have been handed.

Since only God creates something from nothing, the rest of us are forced to use what lies in front of us. Our raw materials include not only the good and gilded creation that he handed us, but also the tarnished elements of the fallen world that we live in, touched by sin and tinged with imperfection. Our task at times seems like spinning straw into gold – uncovering glimmers of the original God-created shine and weaving them into what we make of the world. Other times, we end up unweaving the tapestry – spinning the gold back into straw – makers of mistakes, wrong opinions, wrongs, and hurts.

None of us gets by using only the easy ingredients, the appetizing ones that everyone puts on their list. It’s like one of those cooking shows where they give you a nice basket of ingredients and you begin making beautiful, tasty plans for, what? A key lime pie? A chocolate torte? and then, Boom! The secret surprise ingredient is thrown in. Sardines! Put that in your cake! Plot twist.

Many of us have experienced the same as we sort out the ingredients we’re handed in life. We read the recipe carefully, slowly combining what we think will work best, when all of a sudden: A new ingredient is thrown at us! A child with learning challenges. A career that never takes off the way we dreamed. A parent with dementia. A global pandemic. Plot twist! How will it all come out of the oven now?

We’re all making something of the basket we’ve been handed. Making decisions. Making opinions. Making mistakes. Whether you can carry a tune or draw a stick figure, the number of artists on earth is exactly equal to the population size. The question is no longer: are you a maker? But: What do you make of it all?

We are all making something of ourselves as we make this chaotic and messy world into something together. Consider the end of your day as compared to the beginning: What is in the world at dusk that was not there at dawn? A meal well prepared and enjoyed? A conversation? A compliment? A freshly mown lawn or a reassuring smile? All of these are creations. Less straw. More gold.

The chaos isn’t going anywhere. But neither is the God who twirls it beneath his fingers, kneading it deftly, making the most of the world he has made. Evening and morning: one more day. And it was good.

Jessica LaGrone is a United Methodist clergyperson and the Dean of Chapel at Asbury Theological Seminary. Her books and studies include Namesake: When God Rewrites Your Story; Under Wraps; Broken and Blessed: How God Used One Imperfect Family to Change the World; Set Apart: Holy Habits of Prophets and Kings; and The Miracles of Jesus. The Rev. LaGrone’s latest book, Converting Chaos, is scheduled for release by Seedbed/Zondervan in 2022.