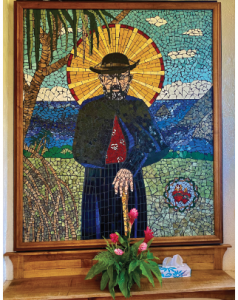 Mosaic of Father Damien in the Maria Lanakila Catholic Church in Lahaina, Hawaii, established in 1846. Father Damien, who had worshiped there, gave his life to the lepers on Molokai. Photo by Steve Beard.

Looking across the shades of aqua blue water from the northwest coast of Maui, there are two Hawaiian islands seen in the distance. One is Lanai, once home to the largest pineapple plantation in the world. Today, the island is privately owned by billionaire Larry Ellison of Oracle and known for its exclusivity, luxurious accommodations, and spectacular golf course.

The other island is Molokai, known around the world for over a century because of the selfless ministry of Father Damien. From the first time I saw the two sparsely populated islands, Molokai’s tragic and triumphant saga of faith and kindness has held a magnetic appeal.

In 1866, the Kingdom of Hawaii forcibly exiled those suspected of having leprosy (known today as Hansen’s disease) to a small plot of land on Molokai. Called Kalaupapa, the peninsula is surrounded on three sides by the majestic Pacific Ocean and boxed in by a towering 3,600-foot cliff. Father Damien called it a “living graveyard.”

At age 33, Damien unhesitatingly volunteered to be a priest to the rejected and dejected in exile. Ten years previous, he left his native Belgium and spent five months at sea to become a missionary to Hawaii. He was a pious, head-strong, and resourceful priest. To his superiors and fellow priests, going to Molokai was a death wish. Furthermore, the colony had the lawless deterioration of the Lord of the Flies.

“Abandon all hope, ye who enter here” reads the sign above hell in the 14th century poem describing the afterlife in Dante’s Inferno. It also could have been written at the unforgiving shoreline of Molokai for those who had been rounded up and sentenced to a lifetime of misery away from friends, ohana (family), and civilization. When the bishop escorted Damien to the island, he introduced the priest to the 800 exiles as one “who loves you so much that he does not hesitate to become one of you, to live and die with you.” No truer introduction could have been pronounced.

Father Damien was a spiritual first responder. Squalor, pain, and suffering surrounded him. And the smell was putrid. “Many a time in fulfilling my priestly duties at their domiciles I have been obliged, not only to close my nostrils, but to remain outside to breathe fresh air,” he confessed. “As an antidote to counteract the bad smell I got myself accustomed to the use of tobacco.” The aroma of his pipe gave him some relief.

“Picture to yourself a collection of huts with 800 lepers,” he wrote to his brother. “No doctor; in fact, as there is no cure, there seems no place for a doctor’s skill.” What he witnessed and experienced was overwhelming. Despite the horrific circumstances, Damien ate from the same bowl as the afflicted, used his fingers to feed poi to those with no hands, shared his pipe, embraced the ill, and gave last rites to the dying. Although he had been sternly warned against physically touching those of his flock, he did the opposite.

Bodily disfigurement came with the disease. Yet, Damien knew that “they also have a soul redeemed at the price of the precious blood of our Divine Savior,” he once wrote. “He too in his divine love consoled lepers. If I cannot heal them, as he could, at least I can offer them comfort.” With gumption and compassion, he even tried to read medical books to help alleviate pain and suffering. He cleaned and bandaged the ghastly wounds, and was even forced to learn to amputate limbs.

In his acts of mercy, Damien expressed his belief that Christ is present in all our sufferings. He worked tirelessly so that those who had been abandoned knew that God, too, did not turn his back. He looked at the innocent orphans and was confident that they had done nothing to deserve leprosy – countering a prevailing belief among some at the time that it was a divine punishment.

As he held the dying, he demonstrated through his embrace: You have dignity. You have worth. You have intrinsic value.

“With parishioners like his Hawaiians, touch was all-important. With a priest like Damien, in whom belief was unaffectedly incarnate, faith was made physical,” writes historian Gavan Daws in the biography Holy Man (University of Hawaii Press). “To mortify the body, to die to himself, to risk physical leprosy in order to cure moral leprosy – this was to be a good priest. If it meant touching the untouchable, then that was what had to be done. The touch of the priest was the indispensable connection between parishioner and church, sinner and salvation.”

From the outset, he addressed his flock: “We lepers.” Damien faithfully preached, baptized, heard confessions, built caskets (an estimated 1,000), dug graves, and buried the dead with respect. He lived the virtues of aloha to those who had been sequestered to die. Furthermore, without timidity, he hounded the government and religious leaders – much to their irritation – for medical supplies, clothing, food, lumber, and piping to provide fresh water to the colony. He was a tireless advocate for the ostracized and forgotten. “I find my greatest happiness in serving the Lord in his poor and sick children – who are rejected by others,” he wrote.

Despair was an ever-constant and dark storm cloud over Molokai. How could it not be? In addition to his priestly duties and doing everything he could to improve living conditions – including building shelters and blasting rocks to create a dock – he also tried to bring joy and purpose to those who were sent there simply to die. Damien organized choirs, an orchestra, horse races, and baseball games.

In his journal, he reminds himself: “Be severe towards yourself, indulgent toward others. Have scrupulous exactitude for everything regarding God … Remember your three vows by which you are dead to the things of the world. … Remember that God is eternal and work courageously to one day be united with him forever.”

As to be expected, even saints become agitated, depressed, and lonely. Father Damien was no exception. Death was omnipresent. “The only thing that really grows here is the cemetery,” he once wrote. “The pews in the church are somewhat emptier, while in the cemetery there is hardly room left to dig the graves.”

At age 49 – after 13 years on Molokai – he discovered that he had contracted the dreaded disease. By this time, despite a handful of detractors and critics, Father Damien had effectively raised awareness around the globe about the plight of those who suffered from Hansen’s disease. His selfless work found support from warmhearted people of all nationalities, politics, and creeds. Princess Liliuokalani presented Father Damien with a medal as a Knight Commander of the Royal Order of Kalakaua – the highest honor of the royal family in Hawaii.

“I am gently going to my grave,” he wrote shortly before his death, three years after contracting the disease. “It is the will of God, and I thank him very much for letting me die of the same disease and in the same way as my lepers. I am very satisfied and very happy.” He died during Holy Week in 1889. For Father Damien, Easter was celebrated in eternity.

In 1936, when there was word that the humble priest was being considered for sainthood, King Leopold III contacted President Franklin D. Roosevelt to get assistance in exhuming the body of Father Damien from Molokai (then the U.S. Territory of Hawaii) and returning it to his native Belgium. The Hawaiians who knew his complex personality – and saw firsthand the fruit of his energetic and industrious ministry – were devastated.

Decades later, in a much-appreciated move, Pope John Paul II saw to it that the remains of Father Damien’s right hand were returned to his original gravesite on Molokai. It was a fitting tribute to the saint who purposefully held out his hand to the untouchable.