The United Methodist Church’s General Council on Finance and Administration (GCFA) reported a 2.9 percent decline in weekly worship attendance from 2014 to 2015. Some observers merely shrug when they hear about a 2.9 percent loss. It seems deceptively inconsequential. 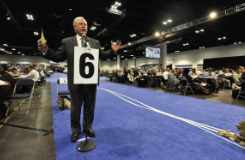 The figure is considered a key indicator of the health and vitality of the church, and it is an important number for helping the GCFA construct the quadrennial budgets for the general church. Last year, when the GCFA learned that average worship attendance fell 2.6 percent from 2013 to 2014, it revised downward its budget proposals for the 2016 General Conference delegates.

While a 2.9 percent decline from one year to the next does not immediately threaten the church, cumulative drops of two percent or more are cause for grave concern. In four of the last six years the denomination has seen drops above that threshold. 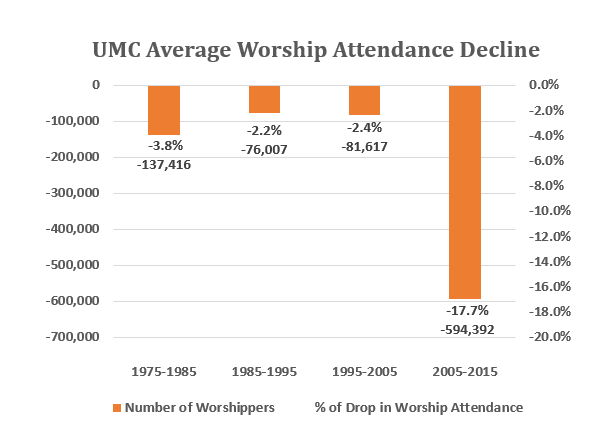 Generally, declining rates of worship attendance have a knock-on effect. As local churches see fewer and fewer worshippers, they find it harder to stem their declines. Eventually, they discover they can no longer afford a full-time pastor, which only exacerbates their situations.

More broadly, the denomination then struggles to recruit new pastors, particularly younger ones with families and college debt. People considering full-time ministry justifiably wonder if there would be a local church appointment available that could pay a decent salary with health and pension benefits.

Calculations like this ultimately impact the church’s seminaries in declining enrollments, leading to reduced staffing at the institutions, and even threatening their viability. In short, the drop in worship attendance erodes the very infrastructure many believe is necessary to reverse the downward trend.

In a 2014 report to the GCFA and the Connectional Table, the denomination’s highest administrative body, House warned that the church needed to quickly adopt a credible and metrics driven plan to arrest the plunge in worship attendance. If it failed to do so, he projected that by 2030 the denomination would slide into permanent decline and face collapse by 2050. 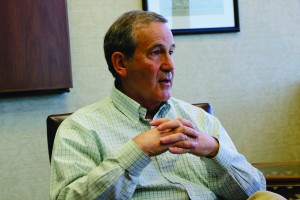 When House prepared his report he possessed attendance records through 2013. Based on the figures at hand he projected an annual rate of decline of 1.76 percent, but the numbers from the last three years (2.1, 2.6, and 2.9) are well above that rate.

“If we experience a growing rate of decline, as demonstrated since 2012,” said House, “our window for a turnaround strategy will be shorter than I originally projected. We cannot maintain the connection unless we are able to implement and fund a strategy within the next 14 years.”

All five jurisdictions in the U.S. experienced average worship attendance losses in 2015. The Western Jurisdiction led the way with a drop of 3.6 percent followed by the Northeastern (3.5), North Central (3.2), South Central (2.8), and the Southeastern (2.5).

Conferences with the steepest losses were: Eastern Pennsylvania (7.3 percent), New Mexico (6.8), Susquehanna (5.7), and Dessert Southwest (5.4). Between 2014 and 2015 the Eastern Pennsylvania Annual Conference saw one of its largest and fastest growing local churches exit the denomination.

Various reasons for the decline in attendance have been cited.

There is general agreement that many local churches are located in areas where the general population has been declining for years (e.g., western New York and Pennsylvania, and across the upper Midwest and Great Plains states). When these churches were planted in the 19th century their locations made good sense, but now, due to declining population, they are difficult to sustain. It is also true that UM Church members are an aging population, so some of the decline in average worship attendance is simply due to attrition.

These natural declines are not being offset by local church growth in the major metropolitan areas clustered along the coasts, across the south, and in other urban areas where other denominations and non-denominational churches are either holding their own or seeing increases. For instance, the UM Church has only a few large, growing congregations in the densely populated urban areas of the northeast and the west.

Of the approximately 32,100 local UM churches in the U.S., 76 percent (24,654) average less than 100 in attendance, and nearly 70 percent (16,909) of those actually average less than 50 on Sunday morning. Local congregations below that threshold are often challenged to afford a full-time pastor or to find the resources necessary for a sustained plan of evangelization.

Beyond the reasons cited above, there is considerable debate as to why worship attendance has fallen for the past 14 years straight, and why the rate has accelerated so dramatically in the past five.

Many progressives and some centrists argue the church is woefully out of step with the broader culture, particularly with millennials. They claim the church is actually alienating many people with its stands on social issues, particularly those having to do with sexual ethics and marriage.

Traditionalists and other centrists argue the church has lost its evangelical zeal, and also claim the Council of Bishops’ public failures to maintain the good order of the church has undermined local church effectiveness, sapped the morale of clergy and laity who have come to distrust their leaders, and driven members away from its congregations. They also dispute the claim that the church’s sexual ethics and teachings on marriage are driving millennials away. They note that some of the largest churches in the denomination affirm the denominations’ traditionalists teachings and continue to draw large numbers of the demographic.

Despite the record loss for the denomination, many local churches continue to thrive, grow, and show signs of health and vitality in the ministries they undertake every day.

“I am confident,” said the Rev. Rob Renfroe, president of Good News, “that when we United Methodists are at our best, we have a message that will win people to Christ, transform lives, and send out dedicated disciples to the last, the least, and the lost. I’ve seen it happen over and over again in many different places. But given the crisis we are facing, we must be prepared, going forward, to consider bold ideas and implement major structural changes.”