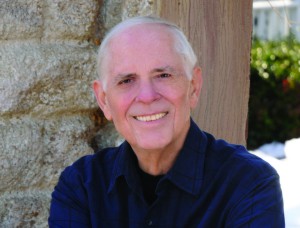 Unbeknownst to him, Professor Thomas C. Oden was the prime agitator to the agony and ecstasy of my seminary experience. It was wading through 1,400 pages of his three volume systematic text books that introduced me to his dear friends Athanasius, Basil, John Chrysostom, Gregory Nazianzen, as well as Ambrose, Jerome, Augustine –– that’s just to name a few.

To be honest, sometimes it felt like fraternity hazing and at other times it read devotionally, healing the wounds of my worn-out and stretched mind.

Looking back on it, I would not have had it any other way.

It was with deep sorrow and great gratitude, mixed with a redemptive joy, that I heard about the death of Dr. Oden (1931-2016), my dear friend who taught me so much about the faith once delivered to the saints.

There will be many glowing testimonials to Tom­ – and none of them will be exaggerations. The praise will be deserved. He was a one of a kind theological mind with a deep spiritual yearning to be faithful to the deep roots of Christianity. Over our 25 years of friendship, there are a few notable reasons I have always trusted Oden.

First, he was steadfastly committed to the historic teachings of Jesus. He made a professional vow to be theologically “unoriginal,” a counterintuitive move for a brilliant intellect within a culture where newer is always considered better and theologians huff and puff to “keep pace with each new ripple of the ideological river.” Oden was sold out to the witness of the martyrs, saints, and prophets –– the faith that has been “everywhere and always and by everyone believed” to be the truth of Christianity.

Second, he had a checkered past. For some reason, I trust those whose skeletons have already been laid bare. He wasn’t always a bleeding heart for orthodoxy. As a “movement theologian,” he dabbled in theoretical Marxism, existentialism, demythologization, Transactional Analysis, Gestalt therapy, humanistic psychology, and parapsychology. Oden liked the bandwagons and everyone winked and nodded. Everyone, that is, except the late Jewish scholar Will Herberg, a brilliant colleague at Drew University who hounded Oden to rediscover his Christian roots.

“The modern philosopher had told me again and again that I was in the right place, and I still felt depressed even in acquiescence,” G.K. Chesterton wrote many years ago in Orthodoxy. “But I had heard that I was in the wrong place, and my soul sang for joy like a bird in spring.”

Taking Herberg’s admonition seriously, Oden incrementally turned his back on the countless trendy movements and “the fantasies of Bultmannianism” he had embraced and ended up being United Methodism’s preeminent and most prolific theologian.

Third, Oden smiled. Sounds insignificant, but it was not. He was pastoral and deeply concerned about the care of the soul. He was a lover of ideas, an engaged student and teacher. Oden was not bitter –– mildly amused, but not bitter. He was actually grateful for his colleagues –– feminist, form critical, deconstructionist, and even heretical –– who challenged him to be more clear in his espousal of orthodoxy. He only asked for a fair hearing.

One would need a billboard to list all his books. Oden spent 17 years editing the 29-volume Ancient Christian Commentary on Scripture. My last lengthy interview with Oden dealt with his four-volume collection of John Wesley’s Teachings. He showed that Wesley’s instructional homilies addressed the “whole compass of divinity” through his deep grounding in ancient ecumenical teaching.

The same could be said of Professor Thomas C. Oden. Rest in peace, my treasured friend and teacher. I know that you are relieved to no longer see through the glass dimly, but finally you are granted the joy to see your Savior face to face.