His Eye is on the Sparrow 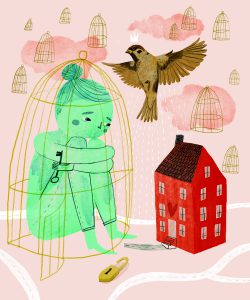 “Is not this the kind of fasting I have chosen: to loose the chains of injustice and untie the cords of the yoke, to set the oppressed free and break every yoke? Is it not to share your food with the hungry and to provide the poor wanderer with shelter – when you see the naked, to cover him, and not to turn away from your own flesh and blood? Then your light will break forth like the dawn, and your healing will quickly appear; then your righteousness will go before you; the glory of the LORD will be your rear guard.”

A Liam Neeson movie shattered my worldview. Though a stint in Peru opened my eyes to poverty and hardship, there were many ways in which I still saw things through youthful idealism and ignorance. Yes, evil certainly still existed, but many of the dark and desperate things had died with history, hadn’t they?

Horror and anger coursed through me as the movie went on. By the end I cheered the death of every individual who had kidnapped, drugged, and trafficked the young women in the story. I wanted worse for them. I wanted justice. I comforted myself with the thought that it was nothing more than Hollywood fiction, a well-written story that couldn’t possibly reflect reality. The rage I felt in learning that human trafficking does, in fact, continue, and that Houston is one of the largest hubs in the United States, was unlike any fury I’d ever experienced before.

My desire for justice intensified as I started to discover statistics. It is estimated that there are 28 to 30 million trafficking victims worldwide; roughly 80 percent are women, 50 percent are children; the average age of entry into the industry is twelve-years-old. According to the anti-trafficking organization Polaris Project, “traffickers use violence, threats, deception, debt bondage, and other manipulative tactics to force people to engage in commercial sex or to provide labor or services against their will.” Victims of trafficking can be anyone, but populations, such as runaways, are often specifically vulnerable.

Why did it take a Hollywood action movie to open my eyes? Why weren’t there riots in the streets, large demonstrations demanding the end of modern day slavery? Where were the impassioned speeches or heartbreaking images? I headed for my first awareness meeting. As I listened to the speaker, my spirit lifted some. The cry for help was being addressed. Someone representing the faith community was working to free modern day captives.

Around that same time, husband-and-wife team Dennis and Bobbie Mark were opening their home to a 17-year-old trafficking victim. Though they had long worked with these modern day slaves, the couple had only recently begun to ask the question, “What’s next for these women?” It was one thing to get the girls out, but what then? They quickly discovered that they had a lot to learn about how to help those they had rescued from bondage.

Founded in 2005, Redeemed Ministries started as a mission sending organization, with a specific focus on trafficking in places like Thailand and Aruba. As the organization grew, its workers soon realized that what they saw in other countries was happening here in the United States as well. It was then that they shifted focus from foreign mission fields to local ones. Much work was being done for victims in other countries, while most in the United States were left high and dry with very little, if any, advocacy at all. 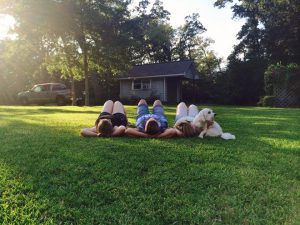 Victims of human trafficking find sanctuary at the Sparrow House.

Redeemed Ministries started their work in strip clubs and soon expanded to “massage parlors.” It was a difficult process. Dennis Mark describes these early years as sort of a language school for the commercial sex industry. Those in the business had their own lingo, their own culture. In order to get behind enemy lines, volunteers had to learn how to communicate in a way they would be heard. One wrong word and the door would slam shut in their faces.

Moreover, once the victims had been freed, it became unclear where exactly to send them and how best to help them recover. According to Bobbie Mark, there are only about 400 beds for sex trafficking victims in the country, as most do not qualify for domestic violence shelters. Because law enforcement agencies have nowhere to house the individuals they pick up, the only other option is jail.

In 2010, Redeemed Ministries established Sparrow House. Designed as “a long term care facility to provide the initial care needed to begin restoration and rehabilitation toward a life of wholeness and independence,” this house is a safe haven for women rescued from the industry. They started with two girls. As residents are free to leave the yearlong program at any time, one left after only two nights. Since then, Sparrow House has helped many women recover from their years as sex slaves.

Redeemed Ministries now focuses heavily on aftercare and provides extensive training for its volunteers. Those who wish to join the cause have a variety of opportunities to serve. From brothel outreach to prison ministry (W.I.N.G.S.), the organization serves trafficking victims at any and every stage of their dark and difficult journey. According to Dennis Mark, their efforts have even brought about changes within the judicial system.

A few years after I found out about human trafficking, I ran in a 10K for a ministry called Free the Captives. This Katy, Texas-based ministry works with those who are trafficked internationally. At the beginning of the race, before we set off, a former victim took the platform to tell her story. Her final words struck me so deep that I began the race blurry-eyed with tears. She spoke of praying for her trafficker, her pimp, the man who had put her in chains, of praying that God would change his heart, and that he would know what it means to be forgiven. How could anyone pray such a thing for someone who had wronged them in the worst possible way? This woman’s attitude was evidence of God’s power and grace; of the new life he gives when he frees us from the chains of sin.

Though the road is difficult, full of victories and setbacks, the prayer of the ancient prophet is being heard and the oppressed are being set free. As we know from the Old and New Testaments, there are some circumstances that are only transformed through prayer and fasting. As we read in Isaiah, “Then your light will break forth like the dawn, and your healing will quickly appear.”