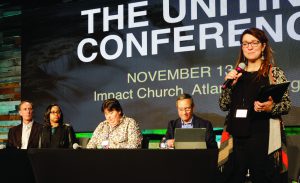 As The United Methodist Church faces a decision on how to include LGBTQ people, those attending a conference grappled with the issue by asking themselves: What would Jesus and John Wesley do?

The Uniting Methodists Conference was held November 13-14 at Impact Church in Atlanta, a United Methodist multicultural congregation led by the Rev. Olu Brown. Approximately 300 people sat in round tables inside the sanctuary while another 100 joined online from 50 locations across the U.S. and the globe.

“Our stance is Jesus; everything else is conversation,” said the Rev. Mike Slaughter, retired pastor of Ginghamsburg United Methodist Church, in one of three worship services held during the gathering.

Uniting Methodists was formed in 2017 from what organizers termed the “vibrant” center of the denomination. The group advocates for the church to stay united by changing church policies to “allow but not compel” pastors to officiate at same-gender weddings and let conferences decide whether or not to ordain LGBTQ clergy.

Since 1972, The Book of Discipline, the denomination’s lawbook, lists both the blessing of same-gender unions and being a “self-avowed practicing” gay clergy member as violations of church law.

The Uniting Methodists Conference states, “We’re a church that holds together both an evangelical desire to lead people to Christ and a passion for justice. We hold together an emphasis on both grace and sanctification. Our church includes moderates, conservatives, and liberals, and we know that we are stronger because of it.”

David Field, author, theologian and a member of the Commission on a Way Forward, presented two lectures that focused on the theology of the denomination’s founder, Wesley. “It takes courage to love every soul God has created,” Field said, explaining what Wesley preached. “We are to support each other’s ministry, pray for each other and view each other in the best positive light,” he said. Rather than judging others, Wesley said, “Judge yourself harshly,” Field said.

The gathering also heard from two other members of the Commission on a Way Forward, the bishop-appointed group charged with recommending ways to move The United Methodist Church beyond its impasse on homosexuality.

The Rev. Tom Berlin, lead pastor of Floris United Methodist Church in Herndon, Virginia, and the Rev. Jasmine Smothers, lead pastor of Atlanta First United Methodist Church, reflected on the work of the commission and the special General Conference 2019. Another member of the Commission on a Way Forward, Dave Nuckols, was also in attendance but did not speak from the podium.

“There is no magic wand,” Berlin told the gathering. “You have to be self-feeders. We are in hard times. The key issue of The United Methodist Church is vitality. The LGBTQ issue is an important issue, but the bishops have told us everything is on the table.”

Smothers preached on Mark 2:1-12 about the four friends who pushed through a large rowdy crowd to bring their paralyzed friend to Jesus. They ended up carrying him on a mat to the roof and digging a hole to lower him in front of Jesus. As those four men were pushing through the crowd they couldn’t have been too nice or they never would have made it, Smothers said. “The world needs to know people love them,” she said. “Stop worrying about your pension. Get a mat and carry them to Jesus!”

Helen Ryde, who called herself a queer person and is the Southeastern regional organizer for Reconciling Ministries Network, said it is time for bravery. “I really believe there is a person in every church who is having inclusive thoughts, but they are terrified they are the only one,” she said. “We have to get brave enough to turn to the person next to us and say that. The majority of United Methodists long for space for all of us.”

Ryde, who said she was only speaking for herself and not Reconciling Ministries Network, told United Methodist News Service she wants the church to roll everything back to pre-1972. That’s when the language around homosexuality being incompatible with Christian teaching was introduced into the denomination’s Book of Discipline.

She said putting people in a position to disagree about including LGBTQ people by allowing individual churches or conferences to decide these issues would be more harmful than the way things are now. “It wouldn’t allow for the thriving of LGBTQ people,” she said.

In a panel discussion called, “Here I Stand,” the Rev. Stan Copeland said he is a traditional compatibilist, and he said many of the people in his congregation at Lovers Lane United Methodist Church in Dallas are from both traditional and progressive sides. He said for the last five years, 68 to 70 percent of new members in his church are coming by profession of faith and baptism. The United Methodist Church has a wide table where all are welcome, he said.

“We must not be brought to our knees by a culture bent toward divisiveness, nor bow at the altar of division and separation. We are called to transform this culture and our warring madness. We make a stronger statement for unity through our rich diversity,” Copeland said.

In her closing sermon, the Rev. Ginger Gaines-Cerilli, lead pastor of Foundry United Methodist Church in Washington, talked about the epidemic of the “UVT” virus, Us vs. Them. “We are called to the difficult and prophetic task of countering status quo—us versus them is not the only way to live.”

Many attendees said they found the conference hopeful and welcoming. “I’m deeply grateful that queer voices were welcomed at the Uniting Methodists Conference, and while it remains to be seen if we will be intentionally factored in, I remain hopeful that the center will be moved closer to the marginalized so marginalization is no more,” said the Rev. Alex Souto, a member of the United Methodist Queer Clergy Caucus.