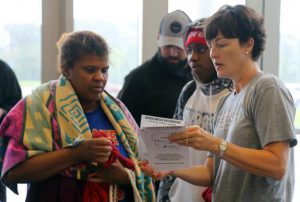 Photo by Shannon Martin, Texas Conference. Monique Spell (with paper), a volunteer, consults on Aug. 28 with people who have taken shelter at Faithbridge Church in Spring, Texas. Record flooding in the Houston area, including Spring, caused a number of United Methodist churches to open as shelters for people forced from their homes.

From flooded buildings to pastors and other staff forced to flee their homes, United Methodist churches in south Texas grappled with a ruinous storm that wouldn’t go away.The Rev. Rudy Rasmus of St. John’s United Methodist Church in Houston was among many area pastors who canceled Sunday, Aug. 27, worship services and watched in amazement as floodwaters inundated highways and neighborhoods.

“It’s pretty crazy,” Rasmus said. “I’m 61, and I’ve never seen this in Houston, and I’ve been through maybe 10 hurricanes and three or four major floods. And this is the worst ever.”

“Tropical Storm Harvey has unleashed the worst flooding in Houston’s history, with catastrophic damage,” he said.

Eight deaths related to the storm had been confirmed by Aug. 28. Flood damage was widespread, and included “many” United Methodist churches in the Texas Conference, Jones said.

United Methodist clergy were among those evacuatedfrom their homes by boat on Aug. 27. Other dramas emerged, too.

The Rev. Elijah Stansell, Texas Conference treasurer, was flooded out of his home but worried much more about his daughter. Her pregnancy due date is imminent, and she remains in her Houston home, even as many roads are impassable.

The Rev. Benjamin West, who leads the Wesley Foundation at the University of Houston, left with his family after their garage took on two feet of water. They had a long, slow drive to Dallas, and remained there, hoping to get home soon.

“We heard the water got higher last night, but we don’t know how high,” he said on Aug. 28. “It could be anywhere from a few inches in the house to a foot in the house, to nothing.”