Texas floods force rescue of many 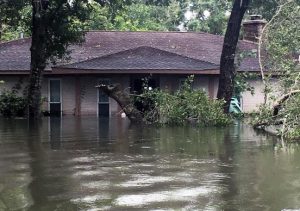 United Methodists ministers have been among those rescued from rising waters in Houston as Tropical Storm Harvey continues to bring catastrophic flooding to much of south Texas.

The Rev. Vincent Harris, a Texas Conference district superintendent, and his wife, Paula, had about a foot of water in their house Sunday when officers of the Klein, Texas, police department knocked on their door and encouraged them to evacuate.

“We felt it was best to go,” Harris said.

They were taken to safety by boat and are spending the night in a family member’s vacant house. Harris noted that he and his wife are veterans of Houston’s chronic flooding, but were unprepared for what Harvey has brought.

“I don’t think anyone thought it would be this bad,” he said. “I’ve been here for 20 years, and I’ve never seen anything like this.”

The Rev. Chappell Temple, senior pastor of Christ United Methodist Church, was part of a team that used an ocean kayak to float the Johnson family to safety.

“It was an interesting day,” Temple said. “I thought, `This is our Dunkirk, this civilian flotilla.'”

The Rev. Andrew Wolfe, associate pastor at St. Paul’s United Methodist Church in Houston, lost his home and both cars to the floods.

“We are really close to Bray’s Bayou, and the water rose very quickly,” he said. “The rain and floodwaters have not let up. Everything is our area is flooded from front-door to front-door.”