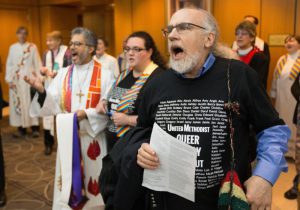 The Judicial Council of The United Methodist Church heard oral arguments this past Tuesday in the matter of the Western Jurisdictional Conference’s nomination, election, consecration, and assignment of the Rev. Karen Oliveto as a bishop of the church. Oliveto is openly gay and married to Ms. Robin Ridenour, a deaconess in the UM Church.

At a Newark, New Jersey, hotel, over 200 people turned out to witness what many regarded as the most controversial case ever to come before the Council. Typically, Judicial Council meetings are closed, but in rare cases it does grant requests for oral arguments and opens its proceedings to the public. The wide interest in the case required the Council to secure overflow space and request heightened security for its Tuesday morning session.

The vast majority of the observers were LGBTQ+ advocates who were there to support Oliveto and protest the church’s sexual ethics and its teachings on marriage. Some wore clerical robes and rainbow stoles, while others wore black t-shirts emblazoned with the message, “United Methodist QUEER CLERGY #calledOUT.” Their demonstrations were made before and after the oral arguments. There were no disruptions of the proceedings. 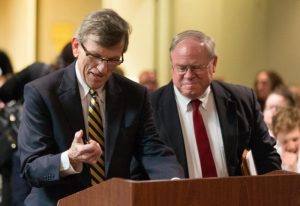 The Rev. Keith Boyette, a UM clergy member and attorney from Virginia, asked the nine-member Council to rule the Western Jurisdictional Conference’s election of Oliveto null and void. Conversely, Mr. Richard Marsh, the chancellor of the Rocky Mountain Annual Conference, sought to defend the jurisdictional conference’s right to elect her and Oliveto’s right to serve.

The arguments revolved around varying interpretations of the church’s constitution as it pertains to the rights of jurisdictional conferences, a clergy member’s good standing and rights to due process, and when it is appropriate for the Council to exercise judicial review in a given controversy.

Boyette countered that the Book of Discipline clearly grants the Judicial Council the right of review and the authority to issue declaratory decisions regarding the actions of jurisdictional conferences. He cited several instances where the Council has asserted its authority in prior instances, and maintained the Western Jurisdictional Conference’s election and assignment of a person clearly in violation of the church’s definition of marriage warrants the Council’s review.

While never yielding the point that the Council did not have jurisdiction in this case, Marsh further argued it would be improper to rule Oliveto’s election null and void. He pointed out that when she was nominated, elected, consecrated, and assigned, she was a clergy member in “good standing,” and therefore an eligible candidate. He maintained any attempt to declare her election null and void would negate her constitutional rights to a fair trial and the appeals process. 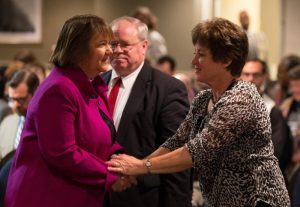 Boyette countered the case was not about Oliveto’s standing as a clergy member, but about the legality of the Western Jurisdictional Conference’s election and assignment of her. Her election, he said, would negate, ignore, and violate the Discipline. He noted that in prior decisions the Council has ruled similar actions out of order.

He also argued basic facts in Oliveto’s ministry necessitate judicial review. Although her supervisory authorities (i.e., bishops, district superintendents, and conference boards of ordained ministry) have been aware of her marriage and admission of presiding at approximately 50 same-sex marriages, all failed to hold her accountable to the church’s standards for ordained ministry. Furthermore, the Western Jurisdictional Conference elected and assigned her fully aware of her marital status and her admission of presiding at same-sex marriages. The Judicial Council, Boyette said, is now the only body left to enforce the church’s law.

Council members had sharp questions for both Boyette and Marsh, with most of their inquiries revolving around the autonomy of jurisdictional conferences and whether it was appropriate for the Council to assert its power of judicial review in the case. Marsh steadfastly defended jurisdictional autonomy and claimed the Council would be “legislating from the bench” if it decided to rule Oliveto’s election null and void. Boyette said the details of the case warranted the Council’s review and cited previous decisions indicating its right to rule on its merits.

Last year, delegates to the 2016 General Conference voted to approve a special commission to address the long running debate over the church’s sexual ethics and its teachings on marriage. Many believe that debate has undermined the church’s health and vitality, and now threatens its unity. The delegates granted the Council of Bishops authority to appoint commission members, lead a discernment process, and to convene an unprecedented called General Conference in 2019 to consider any plan or plans proposed by it.

The Council gave no indication of how it will rule in the case. It is expected to issue a decision within the next few days.

To read the principal briefs and replies submitted before the hearing, click HERE.