The Way of Humility, Honesty, and Courage 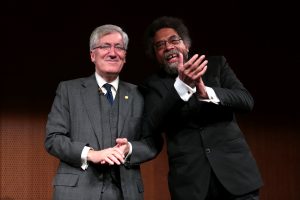 The result of such extreme polarization, Mattingly points out, is that “62 percent of Americans say they fear discussing their political beliefs with others, according to a national poll by the Cato Institute and the global research firm YouGov. A third of those polled thought their convictions could cost them [their] jobs.”

Brothers and sisters, this should not be! Even if (worst case) we consider members of the other political party our “enemies,” Jesus commands us to love our enemies and do good to those who hate us. Paul’s warning aptly describes what our society threatens to become. “If you bite and devour each other, watch out or you will be destroyed by each other” (Galatians 5:15).

This spirit of animosity and even hatred between people of various political persuasions prompted two prominent Christian thinkers to issue a statement calling for humility, honesty, and courage — the subject of Mattingly’s column.

“We need the honesty and courage to honor the contributions of the great men and women who have come before us — those who articulated and defended true principles of justice and the common good, built or helped to preserve worthy institutions, and modeled important virtues,” they write. At the same time, “We need the honesty and courage to recognize the faults, flaws, and failings of even the greatest of our heroes — and to acknowledge our own faults, flaws, and failings.”

None of us is perfect. We all have sinned and fallen short of God’s glorious standard — some of us spectacularly so. We need the honesty to honor with gratitude those things our “heroes” have done well and the ways they helped to build this country, while recognizing and decrying the ways those “heroes” fell short of the ideals that perhaps even they espoused.

“We need the honesty and courage to recognize the blights on our history, the grave wrongs that have been done, reflecting the failure of our leaders and institutions — and our own failures — to honor our principles of liberty and justice for all.” Yes, we have made tremendous progress in many ways toward achieving greater liberty and justice. At the same time, it is with the spirit of American idealism that we recognize we still have a long way to go. Acknowledging we have more work to do is not unpatriotic. It is humble and sober realism. We cannot make progress unless we identify our shortcomings in making a more perfect union. But we do so with gratitude and acknowledgement of the miracle that is our country.

“We need the honesty and courage to think first of the weak, the poor, the vulnerable, and the impact on them, for good or for ill, of our own actions; the actions of institutions — be they economic, social, educational, or philanthropic — in which we play a role; and the actions of government at all levels,” West and George rightfully remind Christian citizens. “This will not generate unanimity as to what policies are best. Reasonable people of goodwill will often disagree. But this can — and we believe must — be a starting point on which there is common ground.”

Too much of the infighting in our country is due to pursuing selfish interests at the expense of others, particularly those who are less powerful or less advantaged. Paul urges us, “In your relationships with one another, have the same mindset as Christ Jesus … Do nothing out of selfish ambition or vain conceit. Rather, in humility value others above yourselves, not looking to your own interests but each of you to the interests of others” (Philippians 2:3-5).

As articulate public intellectuals, West and George have attempted to contend for their opposing viewpoints without holding one another in contempt. “We need the honesty and courage not to compromise our beliefs or go silent on them out of a desire to be accepted, or out of fear of being ostracized, excluded, or canceled. We [also] need the honesty and courage to consider with an open mind and heart points of view that challenge our beliefs — even our deepest, most cherished identity-forming beliefs. We need the intellectual humility to recognize our own fallibility — and that, too, requires honesty and courage.”

While not compromising our own beliefs, we have sought to respectfully engage with persons holding other perspectives. Rather than resorting to personal attacks or demonizing others, we must seek to understand each other’s point of view and where possible work toward an agreed way forward. Within United Methodism, it is just such honest dialog and willingness to compromise for the sake of a positive solution that led the mediation group to propose the “Protocol for Reconciliation and Grace through Separation” that can help move our church past its impasse.

In our own nation, “We need the honesty and courage to treat decent and honest people with whom we disagree — even on the most consequential questions — as partners in truth-seeking and fellow citizens of our republican order, not as enemies to be destroyed. And we must always respect and protect their human rights and civil liberties.” Regardless of perspective or the perceived importance of the issues at stake, there is no room for violent words or actions in attempting to forcefully get our way.

Ultimately, what West and George are calling us to is love. “We need the honesty and courage to love, in the highest and best sense: to will the good of the other for the sake of the other, to treat even our adversaries as precious members of the human family. We need the honesty and courage to resist the hatred — the spirit of hatred — that the zeal even for good causes can induce in [us] frail, fallen, fallible human beings, and that corrupts the human soul and leads inexorably to spiritual emptiness and to tyranny, even among those who began as sincere advocates of freedom and justice.”

“Dear children, let us not love with words or speech but with actions and in truth” (I John 3:18). As Christians, we profess to love our neighbor as ourselves. Do we put that love into practice, or are they just words?

We are amazingly less than 100 days from an election here in the U.S. while in the midst of a pandemic. This is a test. A test of our ability to function as a coherent, democratic society or to splinter into discord. A test of our ability as Christians to engage one another in love, even when we disagree. A test of our capacity to put the needs of others — the common good — ahead of our own needs.

A majority of our country’s citizens are looking to Christians and the Church to lead us onto a better path. What will history and eternity say about how we have risen to that challenge?