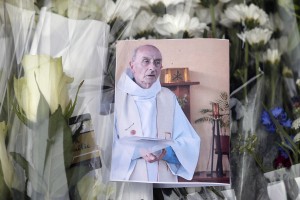 Flowers are left in tribute to Father Jacques Hamel who was murdered during a church service in France. Associated Press.

“Jacques, you were a faithful disciple of Jesus.”

If he were given the opportunity to overhear the proceedings at his own funeral, these are the words that Father Jacques Hamel would have been most pleased to hear. They were said with a mixture of solemnity, sorrow, and triumph by those who knew him best.

In what can only be described as barbaric bloodlust, Father Jacques’ throat was slit by two jihadists in front of the altar of the church at St Étienne-du-Rouvray, near Rouen, nearly 80 miles northwest of Paris. He was 85 years old.

Father Jacques’ death sparked international controversy for politicians and religious leaders in the midst of our current battle against terrorism. Some call his death martyrdom. Others wish we could call it something else so as not to add further tension to an easily flammable international tinderbox.  It is pitiable that the ghastly murder of an elderly priest should have very smart observers tiptoeing through a minefield, but such is the world we live in.

Thankfully, from the testimonies given at Father Jacques’ funeral, there are more celebratory observations to be made.

1. Lifelong commitment. One of his ministerial colleagues used to jokingly remind Father Jacques that he was getting up in years and that perhaps it was time to take his pension. The old priest would laugh and say, “Have you ever seen a retired pastor? I will work until my last breath.”

What was said with good humor ended up being manifest in great tragedy. Serving communion would be his final pastoral act. “This is my body given for you,” said Jesus. “This is the new covenant in my blood…”

“When Jesus wanted to explain to his disciples what his death was all about,” writes Anglican scholar N.T. Wright, “he didn’t give them a theory, he gave them a meal.” As the disciples noted, these are very difficult concepts to grasp. When offered, however, we receive the gifts of the sacraments with grateful and childlike faith.

What was intended to be sacrilegious, Father Jacques’ death in the shadow of the altar ended up becoming an amplified witness of lifelong devotion to the incarnate love of a God pierced with bleeding wounds in his hands, feet, and side. Blood remains the key element that binds all of humanity. When pooled in a puddle, it may appear grotesque; but coursing through our veins, blood remains the source of life.

2. Spiritual vision. At his funeral, it was recalled that Father Jacques tried to push away his murderer with his feet, twice saying, “Go away, Satan.” As taught by St. Paul, Father Jacques knew “our struggle is not against flesh and blood but … against the powers of this dark world and against the spiritual forces of evil in the heavenly realms” (Ephesians 6:12).

Father Jacques had seen many horrors during military service as a younger man. His life had been spared when other soldiers lost their lives. His ministry was one way of responding to the mystery of why his life had been spared. His sister Roselyne spoke of his humble spirit: “The God of love and mercy chose you to be at the service of others … until your last breath.”

3. It’s all about Resurrection. “Christ is risen, it is a mystery, a secret, a secret that God gives us to share,” Father Jacques wrote to his parishioners last Easter. Archbishop Dominique Lebrun responded to this message at the funeral: “Perhaps this mystery, this secret you confided was what was winning hearts in our assembly: yes, Christ is risen. The death is not the last word.”

Lebrun continued: “The resurrection of Jesus is not a catechism lesson, it is a reality, a reality for our heart, for the secret of the heart, a reality at the same time to share with others, as a confidence told with trust.”

There were several thousand French men and women in attendance at Father Jacques’ funeral. For a proudly secular society, this was an enormous audience. Each listener was challenged by Archbishop Lebrun’s message: “Brothers and sisters, let us be simple and honest about ourselves. It is in our heart, in the depths of our heart that we have to say ‘yes’ or ‘no’ to Jesus, ‘yes’ or ‘no’ to the path of truth and peace, ‘yes’ or ‘no’ to the victory of love over hatred, ‘yes’ or ‘no’ to his resurrection.”

Lebrun concluded: “God will never force us. God is patient, and God is merciful. Even when I, Dominique, have resisted, and said ‘no’ to love; even when I told God, ‘I will think about it; we will see later,’ even when I have forgotten, God is patient. God expects me because of his infinite mercy.

“But we must uphold with Jesus that every man, every woman, every human person can change his heart with His grace. This is how we make ours the words of Jesus, even as they may seem beyond our strength today, ‘Well! I tell you: Love your enemies and pray for those who persecute you.’”