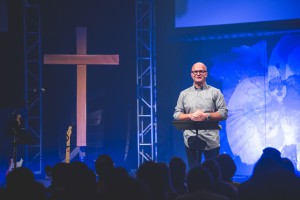 How do you have a conversation with God? Is it the same thing as talking to a friend? Do you have to use certain words? A particular structure? What do you do when it feels like God is silent? These are the questions Adam Weber tackles in his book Talking with God. Weber is the pastor of the multi-site Embrace Church in Sioux Falls, South Dakota, the fastest growing United Methodist congregation in the United States. He didn’t always find prayer particularly easy. In fact, he used to find it painfully boring and figured God felt the same way.

Caught in a cycle of prayers used only to bless meals and protect sleep, a young Weber once participated simply to check a box and move along. It wasn’t until his parents dragged him to a new youth group that his heart began to change.

The Lord used bad motives in order to reach the cynical teen. While Weber only agreed to attend to meet a new group of girls, for the first time in his life, the gospel began to work its way into his heart. But it wasn’t until his youth director referred to prayer as “talking with God,” that Weber’s heart truly responded. “It was as if my heart leapt with me,” he writes. “I felt like I had found something I had unknowingly been searching for my whole life.”

Thus began his quest to learn how to approach a relationship with God. What he’d originally assumed was a complicated and impersonal task, slowly morphed into simple, intimate conversation with a friend. And it is as friends that Weber addresses his audience in the book. With humble, straightforward language, he walks with the reader on a mission to discovering the beautiful grace we have in prayer.

Throughout the book, Weber weaves in examples from his family life to illustrate different aspects of talking with God. From the Easter Bunny – a judgmental jerk according to Weber – to amusing prayers from his children, the stories he tells lift the often intimidating veil from this means of grace. Behind it, we start to see how rich speaking with God can be.

Hardly the dour experience we often make it, prayer is intended to be a celebration. Drawing a parallel between the prodigal son in Jesus’ parable and us, Weber describes the way God welcomes us into his presence: with singing, dancing, and feasting. “When we talk with God, we’re talking with a God who loves to throw parties,” writes Weber. “Knowing this changes prayer. At least it does for me. I don’t need to be uptight and serious when I pray. Yes, it’s good to have a healthy reverence of and respect for God. But you don’t have to be emotionless or somber.”

It is this kind of attitude change toward prayer that sets us on the right track and helps us avoid the temptation to relegate it to a mere item on a checklist. Amidst the chaos and the crazy, this can be an easy thing to fall into. We make excuses. Claim we lack time. Insist we don’t have the energy. Weber lets us in on a little secret: even pastors wrestle with this. “Truth be told, we will always be able to find reasons why we don’t have the time (or energy) to pray,” he writes. “Instead of making excuses, we have to get to the place where we so clearly realize our desperate need for talking with God that it becomes a priority.”

When we’re able to do this, prayer starts to fill us up rather than draw energy. And when this happens, Weber says, we’re then able to pour into others as well. Likening life to a marathon, Weber writes about just how important it is that we pray with and for each other along the way. The toughest miles, he says, are the lonely ones; the stretches trekked without cheerleaders, or worse, those worn down by criticism. As a body of believers, Weber says that we ought to devote ourselves to encouraging one another through prayer. He even offers his Twitter handle in the notes at the back of the book if readers want to send him a prayer request.

“Practically speaking, encouraging others through prayer can look a million different ways,” he writes. “It can be done while grabbing lunch with a friend [or writing] notes to people. It’s amazing how powerful our words to God can be. How powerful our prayers on behalf of others can be.”

This kind of mutual encouragement is vital when we go through storms, when it feels as if God is asleep. During those times, Weber admonishes the reader to do as the disciples did on the boat in Mark 4, to cry out to the Lord. But what happens when you cry out and yet, the unimaginable still happens? When it seems as if God isn’t listening, Weber confesses that he often tends to avoid prayer all together. It is here that the reader might expect a pat, simple answer, a cure-all verse offered to assuage the anxiety and disappointment we so often face. Instead, Weber is honest, vulnerable, sharing his own struggle with unanswered prayer that his father might be healed from a life altering pain issue.

“I could attempt to explain the unexplainable,” he writes. “I could offer reasons and explanations to your questions and mine, but at times there simply aren’t any. None that satisfy. I’ve found that trite answers cause more hurt than good.”

Weber concludes that the storms we face are meant to remind us to focus on what is important, to focus on Christ and keep walking with him. If we do this, he says, we might come to realize that Jesus is all we’ve ever needed. Cry out to him, Weber writes, at any time, in any place, in any way. Cry out when you’re discouraged, when you’re stuck, exhausted, adrift. Cry out. You will be heard.

Prayer is more even than this, to Weber, however. Prayer is not simply a helpline in times of distress. It is beautiful, intimate access to our Father in heaven. It is being with God.

In his final chapter, Weber encourages the reader to “make moments” with God, to move from simple head knowledge about our creator, to heart knowledge. Rather than standing back and observing from afar, Weber says that we are to enjoy him, delight in him, that we are created to be intimate with him. And we can only accomplish this through prayer, through talking with him day by day.

When we pray, Weber says that God will respond to us, that we should expect it. Are you listening? Are you waiting expectantly?