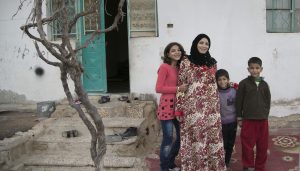 Ghoussoon and her children are featured in the film Salam Neighbor. They are refugees from Syria. Photo: Mohab Khattab.

God is a missionary God. From the moment of creation as told in Genesis, God makes his missionary nature known. With Jesus’ earthly mission, God burst forth into creation showing his missional heart. Jesus not only modeled a missional life, he also established the Church and called her to join him in his mission. Thus, mission is the reason the church exists. And from its inception, the church has always been on mission. As The United Methodist Church wrestles with what it looks like to be the Church in 2020 and beyond, one thing is certain: we will always be called to be missional.

While the call to join Jesus in his mission is universal, there are multitudes of ways for the church to be on mission. And many of the models seen in the early church are still fruitful models today. Let’s look at five missionary models of the early church.

The Prayer Meeting Response. In his last instructions to his disciples before ascending to heaven, Jesus told them to go down to Jerusalem, get in a prayer meeting, get filled with the Holy Spirit, and, under the power of the Holy Spirit, to become missionary witnesses. The church was born as a result of that prayer meeting. And down through the ages many missionary movements have been launched in a similar fashion.

In the mid-1800s just such a prayer meeting took place among a group of Methodists. The result was a mission movement to West Africa. Though many of the members of that prayer meeting died young on the mission field, the remaining members continued to go. As a result, the Methodist Church of Ghana exists today, a church that saw over 55,000 new believers come to faith last year alone! There is power in the prayer meeting when the Holy Spirit shows up!

The Local Sending Church. Through the efforts of Paul, Barnabas, and others, God grew a great church in Antioch of Syria. It rapidly became a missional church. In 44 AD, the church at worship felt the prompting of the Holy Spirit to send forth missionaries into Asia Minor (see Acts 13). They laid hands on Paul and Barnabas and began a long, fruitful, multi-year engagement with missionaries sent out from their church. The missionaries from Antioch maintained a relationship with the church of accountability, support, encouragement, and resourcing. Many churches in North America today are becoming sending churches, or partnering with mission sending agencies to jointly send cross-cultural witnesses who maintain the same kinds of relationship with the church as witnessed in Acts 13.

The Immigrant Relations Strategy. Located along some major trade routes, ancient Palestine was a land of many immigrants and foreigners. The early church often took advantage of this home-grown opportunity for cross-cultural engagement with amazing results. In Acts 8, we read the story of Philip, an early church missionary. Sent by God from Jerusalem toward Gaza, he wasn’t at all sure where he was going; only what he was doing! Upon seeing a high official of the Ethiopian court, he knew his mission field. The ensuing engagement between Philip and the inquisitive foreigner resulted in new life for the Ethiopian, who immediately returned to Ethiopia and took the gospel with him! We see this pattern repeated throughout the New Testament. Today, with a global immigrant population exceeding 250 million people, there has never been a better or more fruitful season for employing this missional strategy.

The Mentor/Mentee Model. The Apostle Paul made several fruitless trips to a backwater town called Lystra. On his third trip, however, he encountered Timothy, a young man of mixed heritage about whom the believers spoke highly. Discerning both the gifts the Holy Spirit had implanted in Timothy and the missionary call of his life, Paul takes him on the road. In the next few years Paul not only mentored Timothy and modeled mission work for him, he also set Timothy on a course for an adult life as a missionary. Paul would subsequently repeat this model over and over again.

Today, missionary sending agencies are finding their greatest mobilizing success when current missionaries are putting forth the call to young people and then mentoring and modeling mission for them. And local churches that make a place for missionaries to put forth the call to their congregation are a big part of the success of this model.

The Persecution/Dislocation Model. Jesus called his disciples to be his witnesses not only in Jerusalem but to the ends of the earth. Sadly, in the earliest days of the church, the disciples found it more comfortable and convenient to remain in Jerusalem. Then persecution broke out against the church. Suddenly, in response to the persecution, the believers were displaced and scattered all over the Roman world. The result was missionary work to the ends of the earth!

No one likes persecution. We pray for the persecuted church. But the reality is that God can also redeem persecution. Indeed, though many of the current global displacement challenges have resulted in the uprooting of centuries old Christian communities around the globe, it has also afforded these refugees incredible platforms for engaging both their host countries, and their fellow refugees, in mission. It is also incredibly fruitful when churches in North America partner with refugee believers in their midst, and resource, encourage, and empower them for mission.

Max Wilkins serves as President and CEO of TMS Global. He previously pastored churches in Florida and Hawaii for 30 years.