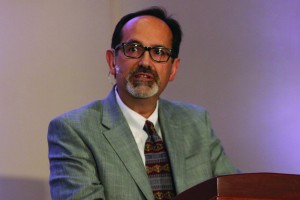 In these tumultuous times, it is important to ask “what do United Methodists believe?” The four Doctrinal Standards of our beloved denomination are the Articles of Religion of the Methodist Church, the Confession of Faith of the Evangelical United Brethren Church, Standard Sermons of John Wesley, and Wesley’s Explanatory Notes upon the New Testament.

In addition to our four standards, the Wesleyan Covenant Association also adopts the Nicene Creed as a doctrinal standard, indeed, as the standard from which the others flow.

United Methodism is often called a via media expression of faith, or a middle way between two extremes, sometimes called the Methodist Middle or Methodist Centrism. I agree with this characterization of our history. However, this via media centrism is also widely misused today to portray our church as something it was never intended to be.

Wesley’s predecessors in the faith, the English Reformers of the 1500s, were like other Protestant Reformers who rejected the Roman Catholicism of their day. On the other hand, they were also not at home in the Calvinism and Lutheranism that was emerging at the same time. Our predecessors therefore became instruments of God in creating a middle course – something entirely different, affirming the best of Catholicism and the best of Protestantism in a new expression of orthodoxy. We believe Wesley’s predecessors two centuries before him, men like Thomas Cranmer, Nicholas Ridley, and Hugh Latimer, were instruments of God’s grace in creating what eventually emerged as the worldwide Anglican Communion.

Two centuries later, the leaders of the Wesleyan revival of the 1700s were heirs of this Anglican middle way. John Wesley himself has rightly been credited with bringing together the best of East and West, combined with the Pietism of his day, into a third way between Pelagian optimism and Augustinian pessimism. Wesley was a conjunctive theologian. He left us a treasure of theological reflections, in which he developed his “practical divinity” balancing holiness and grace in a way that we believe captures the heart of biblical faith.

Standing today in this Wesleyanism, birthed in the Anglo-Catholic tradition of the middle way, we believe The United Methodist Church’s Doctrinal Standards beautifully articulate “the living core of the Christian faith” (2012 Book of Discipline, paragraph 105, page 80) as revealed in Scripture. While we embrace our tradition as finding a middle way, we also affirm that our Doctrinal Standards nevertheless anchor us in traditional, orthodox Christianity. Finding the Methodist sweet spot is not then simply finding a middle compromise between any two conflicting opinions.

Besides being a middle way movement, some have said, incorrectly, that The United Methodist Church “is not a creedal church.” In response, we should ask exactly what is a non-creedal church? What kind of ecclesia has no creed? We believe such a statement is self-contradictory.

Denying that the orthodox creeds of Christianity are at the core of early Methodism flies in the face of the fact that the Wesley brothers were themselves Anglican clergymen, who certainly presupposed the authority of the Nicene Creed, not to mention the reality that the main points of the creeds are already present in our Doctrinal Standards. These standards and this creed are more than mere historical relics of our past. These are the living core of our faith, rooted firmly, we believe, in the revelation contained in the Old and New Testaments.

The Wesleyan Covenant Association embraces the Creed without crossing our fingers behind our backs.

At this critical moment in our church’s history, we in the Wesleyan Covenant Association believe it is time to reclaim and restore the ancient Nicene Creed in a new expression of classical Wesleyanism. We hereby proclaim our assent to, and confession of, the Creed, for the sake of the future of our Methodist movement, and as a bridge to our ecumenical partners in orthodox Christianity around the world.

We believe we are reconnecting our movement to our roots in the Anglo-Catholic stream of Christian orthodoxy found in classical Wesleyanism. This is Wesleyan centrism, the Methodist sweet spot, the living core of the Gospel, which the world so desperately needs today. We in the Wesleyan Covenant Association affirm as central to our faith this single most important ecumenical creed in the history of the Church Universal – the Nicene Creed.

We believe in one God,

The Father, the Almighty,

Maker of heaven and earth,

of all that is seen and unseen.

We believe in one Lord, Jesus Christ,

the only Son of God,

eternally begotten of the Father,

God from God, Light from Light,

of one being with the Father;

through Him all things were made.

For us and for our salvation

He came down from heaven,

was incarnate of the Holy Spirit and the Virgin Mary

For our sake He was crucified under Pontius Pilate;

He suffered death and was buried.

On the third day He rose again

in accordance with the scriptures;

He ascended into heaven

and is seated at the right hand of the Father.

He will come again in glory

to judge the living and the dead,

and His kingdom will have no end.

We believe in the Holy Spirit, the Lord, the Giver of Life,

who proceeds from the Father and the Son,

who with the Father and the Son

is worshiped and glorified,

who has spoken through the prophets.

We believe in one holy catholic and apostolic church.

We acknowledge one baptism

for the forgiveness of sins.

We look for the resurrection of the dead,

and the life of the world to come. Amen

– As printed in the United Methodist Hymnal

Bill Arnold is an ordained elder in The United Methodist Church and professor of Old Testament studies at Asbury Theological Seminary in Wilmore, Kentucky. Bill has been a delegate to three General Conferences and is the author of numerous books including Introduction to the Old Testament (Cambridge University Press) and Seeing Black & White in a Gray World (Seedbed). This article is adapted from his remarks at the Wesleyan Covenant Association gathering in Chicago on October 7, 2016.