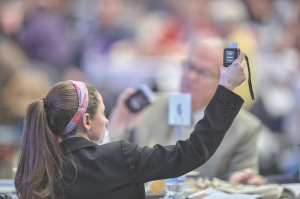 A delegate holds her voting device aloft on the last day of a Special Session of the General Conference of The United Methodist Church, held in St. Louis, Missouri. Photo by Paul Jeffrey, UMNS.

On September 18, the conversation group working on the Indianapolis Plan submitted the final version of a plan for an amicable separation in The United Methodist Church. As the document states, “We seek to move away from the caustic atmosphere which has often marked conversation in the United Methodist Church into a new season where we bless one another as we send each other into our respective mission fields to multiply our witness for Christ.” This plan (of which I am one of the authors) envisions the UM Church giving birth to new denominations of United Methodism.

• A Traditionalist UM Church would maintain the current stance of the Discipline regarding same-sex marriage and the ordination of LGBT persons.

• A Centrist UM Church would remove all the restrictions related to same-sex marriage and LGBT ordination, allowing individual annual conferences and local churches to make those decisions (essentially a “One Church Plan” denomination).

• A Progressive UM Church that celebrates and mandates same-sex marriage and LGBT ordination in all its churches could form immediately, and/or progressives could find a home in the Centrist UM Church.

• Other denominations could be formed by any annual conference or group of 50 congregations.

What are the unique values and advantages of the Indianapolis Plan?

It is the only plan that was crafted by persons representing diverse theological perspectives. The group contained five traditionalists, five centrists, and two progressives. (Attempts were made to enlist more progressives, but those approached were unable or unwilling to participate. However, progressive groups were consulted as the plan developed.) As such, this plan seeks to take into account the values and interests of all three groups. It represents a compromise among the three for the sake of ending the fighting and helping the church move into a positive and fruitful future.

The Indianapolis Plan is supported by the leaders of the Wesleyan Covenant Association, the Confessing Movement, Good News, and UM Action/IRD. At the same time, the plan was not drawn up by these traditionalist groups. Instead, it was formulated in negotiations among diverse participants mentioned earlier.

It is the only plan that seeks division/separation rather than expulsion. By now, the leaders of all three groups – traditionalists, centrists, and progressives – have publicly stated that separation of some kind is the only way to move forward in a positive direction. Most other plans, however, envision a forced departure of one group or another from the church. The UMC Next Plan would essentially force traditionalists to leave the UM Church by changing the church’s definition of marriage and allowing LGBT ordination. Continuing to perfect the Traditional Plan by increasing accountability and closing loopholes would essentially force progressives to leave the UM Church or be subject to complaints and disciplinary procedures.

Only the Indianapolis Plan treats all perspectives equally, forcing no one to “leave” the church, but at the same time creating new denominations and allowing anyone to choose which new denomination to be part of. Nowhere in the plan is this more clearly seen than in the ability of central conferences, annual conferences, and local churches to make the decision on which denomination to align with by majority vote, rather than a super-majority (2/3) vote. If one group is “leaving,” a super-majority vote would make sense. But if all are choosing between equal alternatives, then a majority vote is more appropriate. Under the Indianapolis Plan, there are no winners or losers, people “leaving” and people “staying.” The plan attempts to treat all parties equally.

The Indianapolis Plan does not dissolve The United Methodist Church, but provides for its legal continuation through the Centrist UM Church. This is necessary in order to avoid constitutional amendments, which would require a 2/3 vote of General Conference and a 2/3 vote of all the annual conference members. This plan can be passed by a majority at General Conference and implemented immediately, rather than having to wait up to two years for the ratification vote. Legal continuation of the UM Church is also necessary because of legal issues that may need to be cared for in the process of separation that we may not even be aware of at this point.

But the Centrist UM Church will not simply be a continuation of The United Methodist Church as it currently exists. It will “do business as” the United Methodist name with a modifier. It will change its 48-year moral teachings and requirements around LGBT persons. It will consider making the United States its own central conference, able to adapt the Discipline differently in the U.S. than in other countries. It will undoubtedly change its structure to address the loss of perhaps one-third of its U.S. membership. Even the UMC Next Plan (from the centrists and progressives) envisions the creation of a “Commission on the 21st Century Church” that would “prepare a comprehensive structure and governance plan” to be enacted by a future General Conference. The Centrist UM Church will be in this sense a new denomination.

If the goal is to gain support across the theological spectrum for a fair and equitable plan that allows the different parts of the church to move easily into new denominations that can operate independently based on different theological perspectives, the Indianapolis Plan is best suited to accomplish that goal.

All denominations formed under the Indianapolis Plan could use (but are not required to use) the “United Methodist” name with a modifier to distinguish one denomination from another (e.g., Liberationist United Methodist Church, United Methodist Church of the Philippines). The use of the name is not important for many United Methodists in the U.S. However, it is an extremely important issue for some in the central conferences outside the U.S. In Africa, the United Methodist name is a well-established and trusted brand that opens doors and protects the church from capricious governmental actions that might threaten the property or ministries of the church there. They also told us how difficult, cumbersome, and expensive the process is to change a corporate name. We heard from many that they could not support a plan that would require them to change the name of the denomination they are part of. The same is true of the cross and flame logo, which is widely used in Africa and the Philippines to demarcate the United Methodist Church brand. Denominations could continue to use (but are not required to use) the logo with modifications to distinguish one denomination from another.

The Indianapolis Plan provides a new, less costly way to handle pension liabilities. Rather than require an up-front payment of pension liabilities (as in the current local church exit provision), this plan allows Wespath to reallocate those liabilities to the new denominations based on which annual conferences, local churches, and clergy choose to align with each denomination. We engaged in extensive conversation with legal experts at Wespath about how to handle pensions. They were eager to cooperate (without implying any endorsement of our plan) and provided significant legal language for the Indianapolis Plan legislation that they believe addresses the concerns over pensions. Since the money for unfunded pension liabilities may never be needed, it makes more sense to transfer the liability, rather than requiring churches and annual conferences to pay the liability up front. Local churches that withdraw to become independent would still be required to pay for unfunded pension liabilities before withdrawing.

The Indianapolis Plan envisions a General Conference-approved equitable plan for allocating general church assets among the resulting new denominations. While the UMC Next Plan proposes the gift of some financial resources to a new Traditionalist UM Church, the Indianapolis Plan envisions an equitable division of general church assets among all denominations formed in this process. Such a division of assets would not require any boards or agencies to be dissolved or any property to be sold. Rather, liquid assets and investment properties could be divided proportionally based on membership. Where there are donor restrictions on assets, those restrictions would be maintained. While the Indianapolis conversation group did not have time to agree upon a formula for allocating assets, different groups have submitted proposals for how such an allocation might be done. The General Conference and its legislative committee will determine how the process would work. The group agreed that disputes would be settled by appeal to an arbitration board, making any resort to civil courts or lawsuits unnecessary.

The Indianapolis Plan offers a short timeline, allowing expeditious movement into the new denominations for those who are ready, while leaving the door open for alignment decisions for the next eight years. The plan envisions annual conferences making alignment decisions before the end of 2020, with local churches that disagree making their decisions by mid-year 2021. General Conferences forming the new denominations would take place in fall 2021. The new denominations would be fully functional under their new governing documents on January 1, 2022. This timeline allows the new denominations to form and get on with ministry, rather than being mired in the decision-making process. At the same time, annual conferences or local churches (more likely) could change their alignment through the end of 2028. This allows those who are not ready to make a decision right away to live into the possibilities and make a decision later. However, no annual conference or local church could take a vote to reconsider its alignment unless three or four years had passed since its previous vote on the matter.

The interim implementation will allow immediate change to how churches and annual conferences function, in order to curtail further conflict. Traditionalists would immediately be free of the pressure to change their position on marriage and sexuality and could begin moving in a robustly proactive ministry direction. At the same time, centrists and progressives would immediately be free of complaints, trials, and disciplinary processes over same-sex weddings or the ordination or appointment of self-avowed practicing homosexuals.

Some have pictured amicable separation as a divorce. Our group has instead pictured this process as The United Methodist Church giving birth to new children. The UM Church as it has been will exist no more. But it will exist through the new denominations that inherit the characteristics of the parent denomination. Each of the “children” will be different from each other. But they will all be part of the United Methodist family and heritage.

The underlying motive for taking this path is to broaden and multiply the mission of the church. As different denominations, we will be able to reach more people with the good news of Jesus Christ, make more disciples, and see more ways in which the presence of God’s Spirit transforms the world. We will be able to focus our energies and resources on mission and ministry, rather than fighting, power, and control. Each new expression of the church will be able to reach people that the other denominations cannot reach.

As the plan states, “We envision an amicable separation in The United Methodist Church which would provide a pathway to new denominations of the Methodist movement so we can all make new disciples of Jesus Christ for the transformation of the world. These new denominations, though separate, will continue the rich heritage of the Methodist movement while being free to share their respective witnesses for Christ unhindered by those with whom they have been in conflict. We will release one another to joyful obedience to Christ’s call on our lives.” May it be so.