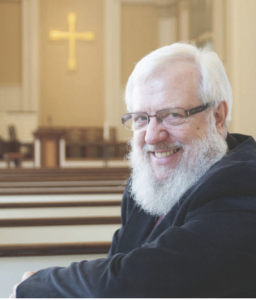 A Professor Emeritus of Wesley Studies at Perkins School of Theology, Dr. William J. Abraham was the Albert Cook Outler
Professor of Wesley Studies from 1995 until his retirement in May 2021. He joined the Perkins faculty in 1985 as the McCreless
Associate Professor of Evangelism and the Philosophy of Religion. Photo courtesy of Southern Methodist University/H. Jackson.

On Thursday, October 7, United Methodism lost a remarkable scholar who exercised his theological and spiritual gifts with wit and precision. Dr. William J. Abraham was one of the theologian pillars of the church – not just in Methodism, but in broader ecumenical circles, as well. He was a herculean force for traditional Wesleyan theology from his outpost at Perkins School of Theology in Dallas. Abraham’s death was unexpected. He was 73.

Like so many others within United Methodism, we were stunned and saddened by the news of the passing of the man we simply called Billy. Those of us at Good News have considered him a friend and co-laborer in the work of renewal within our denomination – even during those times when we had a hard time fully interpreting his distinct and endearing Irish accent.

Twenty-five years ago, Billy’s address at the Confessing Movement gathering in Atlanta was the featured cover story for Good News. He had just published a book entitled Waking from Doctrinal Amnesia: The Healing of Doctrine in The United Methodist Church. “We have simply forgotten our doctrinal heritage and hence have ignored its rich treasures and reserves,” he told the assembly in Atlanta.

For the magazine, we picked up on the other image he discussed. Our cover title was “Healing our Doctrinal Dyslexia.” Abraham believed United Methodism’s theological crisis was that the children of Wesley – decades later – were looking at the same material (our theological heritage) and seeing and proclaiming divergent messages. (In his honor, we have republished the essay on the pages that follow.)

“As anyone suffering from dyslexia knows, the crucial problem is that one sees the relevant marks on the page but the marks are ingested in a distorted fashion,” he said. “In the case of doctrinal dyslexia, what happens is analogous to this condition. In our case what has happened is that we have turned inside out and upside down the crucial material on doctrine in the Book of Discipline. We have displaced the actual standards of doctrine laid out in the Constitution by concentrating on the highly speculative material laid out in the section on our theological task.”

After his conversion in his teen years through the ministry of the Methodist Church in Ireland, Billy began his theological training. “In the early stages of my own intellectual and spiritual journey, Wesley was pivotal for me,” he writes in his fascinating book, Wesley for Armchair Theologians. Mysteriously, once he began his theological training, “Wesley suddenly went dead on me. I found him not so much archaic as surreal.”

Ironically, Billy’s interest in Wesleyan theology pivoted while he was on a sickbed: “Happily, listening to some purloined audiotapes on Wesley by Albert Outler during a bad dose of the flu arrested this journey away from Wesley.” He found himself a great proponent of the core message. “Wesley’s theology is an intellectual oasis lodged within the traditional faith of the church enshrined in the creeds,” he wrote.

Abraham would go on to become the Albert C. Outler Professor of Wesley Studies at Perkins School of Theology. He would often speak warmly about his appreciation for Dr. Outler, his scholarship, and his love for both Christ and the Church. Nevertheless, Abraham unflinchingly critiqued Outler’s proposed “quadrilateral.” It gives too much leeway to mistakenly believe that Scripture, tradition, reason, and experience are of equal value in interpreting divine revelation.

“The consequence is that our identity is now shaped by an interesting but dubious exercise in religious theory of knowledge. On pain of denying our tradition, we are forced to confess adherence to a piece of clever epistemology [how do we know] which was worked out in the 1960s and which is at odds both with Wesley and with the clear content of the constitutional standards of doctrine,” he believed. “In these circumstances the great classical doctrines of the faith, to which Wesley wholeheartedly adhered, are treated as optional alternatives to be received, rejected, remade, or reimagined at will. We have idolized a piece of philosophical speculation and are now reaping the consequences. Not surprisingly, we find ourselves torn asunder by conflicting doctrinal proposals.”

Professor Abraham continued: “As a pedagogical device, the quadrilateral indeed has merit. Anyone who is a teacher can testify to this. However, as a formal proposal in the field of religious knowledge, the quadrilateral is an absurd undertaking, for only an omniscient agent could seriously undertake to run our proposals through the gamut of Scripture, tradition, reason, and experience. Only God could use the quadrilateral and, thankfully, God does not need it.” Vintage Billy.

His message twenty-five years ago still resonates. “The quadrilateral is much like a kaleidoscope. Each time you shake Scripture, tradition, reason, and experience, a different configuration emerges,” he said back then. “The result is doctrinal chaos and incoherence. Even Albert Outler, the great architect of the Methodist quadrilateral, was disturbed by its misuse, and late in life expressed reservations about its logic.”

In the forward to The Rise of Theological Liberalism and the Decline of American Methodism by Dr. James V. Heidinger II, Billy voices his curiosity about Outler’s perspective from the vantage point of eternity. “It would be great to sit in on a seminar with Outler and Wesley and other great heroes and heroines of our tradition,” he wrote. “The workers die but the work goes on, as Wesley once noted. There are eighty-two million descendants of John Wesley across the globe so Methodism is not going to disappear any day soon. The big question is what place United Methodism will have in that future.”

Looking forward. Billy Abraham was not an early proponent of dividing United Methodism. His mind, however, did change. He would come to believe that it was the most logical and peaceful option available. Speaking in front of renewal leaders back in 2014, his message is worth recalling today.

“If we are driven to separation then we should lift our heads high and not be drawn into a parochial reaction against the current networks who would take us into moral and theological heresy if not apostasy. We should be as wise as serpents and innocent as doves,” he told the Methodist Crossroads gathering. “Beyond the current crisis, we should imagine a whole new reiteration of our Methodist and Evangelical United Brethren identity and heritage. I envisage the creation of a new form of global Methodism. Let’s call it the Global Methodist Church. This would gather up the majority who have stood firm across the years and across the world and then reach out to other Methodist and Wesleyan bodies as time and energy permit.”

Abraham continued: “We need be in no hurry but we should be urgent in seeking the guidance of the Spirit to become over the next several generations an industrial-strength version of Methodism that would stretch across the world. We would also look to a whole new ecumenical future with former and newer partners willing to reach out afresh in mission and witness.”

In conclusion, Billy said, “To achieve this we will need great patience with one another. Even where we stand totally together the chemistry can be difficult to endure. This task is much too big for any one person or any one group. We must resolutely stand together and work to continue the life of United Methodism beyond its current incarnation. We can and should have a vision of a global Methodism that is substantial, bold, generous, and irrepressible.”

Writing in A Firm Foundation in 2017, Billy issued a rousing challenge for those looking to experience a fresh chapter of Wesleyanism. “We know that we have come to a crossroads in United Methodism, and we have rightly taken our stand on the moral faith of the Scriptures and of the Church through the ages,” he wrote. “It is time to move on and work for a fully faithful commitment to Christ and to find fresh expressions for the tradition we inhabit. We leave to Providence those who disagree with us.”

As a churchman, he knew the path ahead was going to be filled with challenges. “We need a combination of firmness and flexibility; of impatience and patience; of fear and confidence; and of divine wisdom and human ingenuity. Above all we need to get our act together in mission and evangelism. … The road ahead will at times be extremely difficult and even treacherous; the destination, however, will open up a new day for a fresh expression of classical Methodism and of the Evangelical United Brethren tradition.”

Within the legacy of his ministry is his wholehearted devotion to sharing his work with believers outside the United States. He knew that the historical Wesleyan message travels well beyond North American borders. “What we need is a whole new configuration of United Methodism that will be missionary-oriented, open to the full working of the Holy Spirit, unapologetically orthodox, sacramentally robust, and committed to justice and the care of the needy,” he wrote in A Firm Foundation. “In the short term, we may be a minority in the United States; worldwide, we are likely to be a global majority.”

There have been many kind remembrances of Billy since his passing. They are all touching and well deserved. To his family we pass along our heartfelt condolences. We are grateful for his intellectual and spiritual witness. His passing has left us in mourning, but his life was lived with a vigor that his legacy will be remembered with great celebration. We honor Billy’s memory by serving the Christ he proclaimed and living out the Gospel revealed in the Scriptures Billy loved.

Upon his announced retirement from Perkins School of Theology, he also announced that he would be launching the Wesley House at Truett Seminary at Baylor University in Waco, Texas (see page 22). We asked his long-time friend and colleague Dr. David Watson of United Theological Seminary to interview Billy for Good News readers in 2020. We leave you with Billy’s response to a question about parting advice.

“Be anchored in a discipline that requires rigorous standards of excellence; for me that has been analytic philosophy. Stand by the truth and work on it until it becomes essential to your identity,” Billy responded. “Never, ever be up for sale, as far as the revelation of God mediated in Scripture is concerned. Stay grounded in regular ministry in the church. Take the politics of institutions seriously; be street-smart. Know your critics better than they know themselves. Fast and pray as best you can!”

We will miss him. In his memory, we recall the passage from the Book of Revelation: “Then I heard a voice from heaven say, ‘Write this: Blessed are the dead who die in the Lord from now on.’ ‘Yes,’ says the Spirit, ‘they will rest from their labor, for their deeds will follow them’” (14:30).