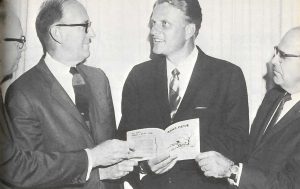 Wherever he went around the globe, Billy Graham spent his life preaching a message of God’s love for all people, the essential need to repent, and the assurance that Jesus Christ walks with believers in the brightest and darkest of times. Over his illustrious ministry, Graham preached live to more than 80 million people in more than 185 countries.

We observe the news of his passing – at his home in Montreat, North Carolina, at the age of 99 – with both joy and sorrow. He had a great gift and walked with even greater humility. Billy Graham was a role model in holding firm to both evangelism and integrated social action, orthodoxy and generous ecumenism, grace and truth, love and repentance.  He was pivotal in helping form numerous evangelical institutions that will be remembered as part of fruitful legacy.

“Billy Graham’s influence through the lives he touched – including 11 presidents and many other world and national leaders – will only be measured in heaven,” observed the Rev. Thomas Lambrecht, vice president of Good News. “His personal integrity, honesty, and accountability are a shining example of principled Christian leadership. Our world and the church are better and stronger today because of the servant ministry of Billy Graham.”

Graham served as a great inspiration to evangelical United Methodists. In 1980, he preached at the United Methodist Congress on Evangelism held on the campus of Oral Roberts University in Tulsa, Oklahoma.

“Many have moved from a belief in man’s personal responsibility before God to an entirely new concept that assumes all men and women are already saved,” said Graham. “There’s a spreading universalism, which has deadened our urgency that was had by John and Charles Wesley, Francis Asbury, E. Stanley Jones, and others like them.

“This new evangelism leads many to reject the idea of conversion in its historical Biblical meaning and the meaning historically held and preached and taught by the Methodist Church.”

Graham concluded his remarks by quoting Methodist leader John Wesley in 1784: “You have nothing to do but to save souls, therefore spend and be spent in this work.” He continued to quote Wesley, “It is not your business to preach so many times and to take care of this or that society; but to save as many souls as you can; to bring as many sinners as you possibly can to repentance and with all your power to build them up in that holiness, without which they will never see the Lord.”

More than a decade before his address at the Congress on Evangelism, Graham’s preaching played a key role in the conversion of Good News’ founding editor Charles Keysor and Graham encouragement was an important inspiration during the formative years of Good News. On the occasion of our ministry’s 10-year anniversary, Graham wrote a personal note of encouragement to the staff and board of directors of Good News:

“I have always believed that The United Methodist Church offers tremendous potential as a starting place for a great revival of Biblical Christian faith. Around the world, millions of people do not know Jesus Christ as Savior and Lord, and I believe that The United Methodist Church, with its great size and its honorable evangelistic tradition, can be mightily used by God for reaching these lost millions,” wrote Graham in 1977.

“I have been acquainted with the Good News movement and some of its leaders since 1967. To me it represents one of the encouraging signs for the church fulfilling its evangelistic mission, under the Bible’s authority and the leadership of the Holy Spirit. At the forefront of the Good News Movement has been Good News magazine. For 10 years it has spoken clearly and prophetically for Scriptural Christianity and renewal in the church. It should be read by every United Methodist.”

Everyone associated with Good News in that era – and subsequent generations – found considerable inspiration in Dr. Graham’s encouraging words.