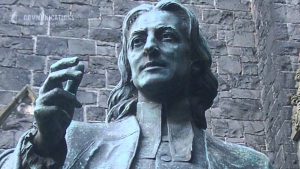 I feel for the guy. For he certainly wasn’t the first fellow ever to go rather begrudgingly–or as he put it, “very unwillingly”– to church. After all, in terms of his pastoral career trajectory, it hadn’t gone exactly as he might have hoped it would so far.

The missionary gig, for instance, was pretty much a bust.  For his inability to commit to the girl he loved led her to give up and marry someone else, leading him not only to a broken heart but to a singularly stupid misjudgment when he then tried to deny her communion.  He got out of town, in fact, just before being arrested by the uncle of that girl who just happened to be the constable in that community.

Likewise, on the way back home, those same kinds of doubts that most of us have had at one time or another began to rise to the forefront of his thinking again as well.  “I went to America to convert the Indians,” he wrote, “but oh, who will convert me?”  For in his own estimation, he had nothing more than a “fair summer religion…I can talk well; indeed and believe myself, while no danger is near,” he said.  “But let death look me in the face, and my spirit is troubled.”

When he arrived back in his own land, thus, it was fairly evident that he was in a pretty dark place of despondency indeed.  For despite his background and education, even his ordination and pastoral service, he still didn’t quite have the personal faith he wanted, which was a “sure trust and confidence in God, that, through the merits of Christ, my sins are forgiven and I reconciled to the favour of God.”

And then, as so very often happens, that same God sent along someone as an answer to his prayers, a young German by the name of Peter Bohler, who was on his way to serve as a missionary to slaves in South Carolina.  And though John disputed Peter’s words at first, arguing that forgiveness and peace could only be earned by continual effort, Bohler pushed back, telling him, “my brother, my brother, that philosophy of yours must be purged away!”

Still, the idea of salvation by faith alone, to say nothing of “instantaneous conversions,” was a rather strange notion indeed to that preacher’s kid turned Anglican priest.  Confused and convicted, he considered “leaving off preaching,” in fact, but then his new friend Peter told him not to hide the talent God had given him, but simply to “preach faith till you have it; and then, because you have it, you will preach faith.”

It was in such a state of uncertainty, thus, that he went that night to a Moravian meeting in the City of London at Alders Gate, just a few feet from Charterhouse where he had gone to boarding school as a boy.  But there, at about a quarter till nine, while listening to someone read from the preface of Martin Luther’s commentary on Romans, John Wesley finally figured out the change which God can work in a person’s life through faith in Christ.

“I felt my heart strangely warmed,” he wrote.  “I felt I did trust in Christ, Christ alone for salvation; and an assurance was given to me that he had taken away my sins, even mine, and saved me from the law of sin and death.”

And from that moment on, both the faith and mission of John Wesley found a new impetus and energy indeed. To be sure, temptations and trials still buffeted him, and from time to time, he continued to struggle with despair and doubts, even decades afterwards. But after experiencing his own personal Pentecost, John Wesley knew that ultimately he would never be the same again. For he now understood that it is faith, not fear, that should lead us to salvation, and armed with that newfound belief, John and his brother Charles quite literally changed the world.

On this Aldersgate Day May 24, exactly two hundred and eighty years after that night, it’s good to be reminded that whatever it takes, God will never give up on getting us to a place of genuine faith in our lives either.  We just have to go wherever He may lead us.

“Very unwillingly” or not.

Chappell Temple is lead pastor of Christ United Methodist Church in Sugar Land, Texas, a southwestern suburb of Houston. He blogs at Chappelltemple.com. This article is reprinted by permission.