How “Centrist” Is Uniting Methodists? 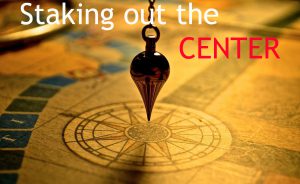 The new group Uniting Methodists is in the process of forming to (in their words) give voice to the “broad center” of The United Methodist Church. A recent information session about the group was held at Church of the Resurrection in Leawood, Kansas, led by the Revs. Adam Hamilton, Tom Berlin, and Olu Brown. More information about the group may be found on their website.

According to an article posted by the Great Plains Annual Conference, Hamilton said, “We can’t keep doing what we’re doing. Who’s going to speak up for that broad, middle in the center?”

For the last 40 years, the “broad, middle” of global United Methodism was, of course, expressed by the General Conference. For the purposes of the information session, however, the “middle” refers to the two positions in conflict within The United Methodist Church over the question of how the church is to be in ministry with LGBTQ persons. The progressive part of the church seeks to offer same-sex weddings and ordination to LGBTQ persons, while the conservative part of the church seeks to maintain the current stance in our Book of Discipline that “all persons are of sacred worth” and are loved by God, and that “the practice of homosexuality is incompatible with Christian teaching.”

The Uniting Methodists position is that there is a middle ground that would allow same-sex marriage and ordination in the church, but not require it. This would effectively allow individual pastors to make their own decision about doing weddings and individual annual conferences to decide whether or not to ordain practicing homosexuals. Their hope is to keep much of the church united around this “Third Way” or “local option” approach.

But is Uniting Methodists really a “centrist” organization?

The three leaders who gave presentations at the information session are all in favor of allowing same-sex marriage and ordination. I do not know all of the group’s leaders identified on the Uniting Methodists website, but all those I do know favor allowing same-sex marriage and ordination. Some of those leaders are outspoken advocates for LGBTQ marriage and ordination, including being part of Reconciling Ministries Network (the primary advocacy group for changing the church’s position). I am not aware of any identified evangelical leader on the Uniting Methodists team who favors keeping the church’s current position around LGBTQ ministry.

Further light is shed on the composition of Uniting Methodists by the survey taken at the informational meeting, as reported in the article. Two-thirds of the clergy and lay participants who took the survey identified themselves as progressives — those who would favor same — sex marriage and ordination. Of course, attending the informational meeting and taking the survey does not mean that one is a supporter of Uniting Methodists. Given the group’s agenda, however, one would expect more progressives than conservatives to be supporters. So if anything, the two-thirds number is low.

One must ask, then, whether Uniting Methodists is in reality a predominantly progressive group that seeks a slower transition toward a fully progressive position in The United Methodist Church, rather than an authentically centrist group that seeks to welcome both positions. The Rev. Hamilton has made no secret of the fact that he believes the church in the United States is changing on this issue, and that in 10-20 years, the church will fully accept same-sex marriage and ordination for practicing homosexuals. He illustrated that point at the informational meeting by saying that his congregation at the Church of the Resurrection – United Methodism’s largest membership – used to be about 70 percent conservative on this issue, but is now about 70 percent progressive.

Some within Uniting Methodists leadership who emphasize concerns about justice even imply an equivalence between the “exclusion” of LGBTQ persons from marriage and ordination in the church with the racism signified by the all-African-American Central Jurisdiction formed in 1939 and rightfully abolished in 1968. One hopes that the group will come to realize that it is a hurtful mistake to even imply that supporting the historic teaching of the Church about marriage and sexuality is somewhat akin to racism.

Uniting Methodists believes that the “center” of the church is a broad and numerous group that makes up 80 to 90 percent of United Methodism. Survey participants at the informational meeting believed that about 80 percent of their congregations are predominantly “compatibilists” — willing to live in a church that permits same-sex marriage and ordination, while not requiring it.

Those estimates might be correct. Nevertheless, the numbers from the survey of the audience at the informational meeting must be viewed with special attention – especially considering it was an overwhelming progressive and compatibilist audience. It goes without saying that the survey results are far from a realistic reflection of United Methodism in the U.S.

Furthermore, the participants did not represent the 45 percent of United Methodists who live outside the U.S. Those members are by and large conservative, and many would not be able to live in a denomination that allows same-sex marriage and ordination, but their viewpoint is not reflected in the Uniting Methodists survey. When people say they want to construct a solution for the 80 percent of United Methodists in the middle, they are ignoring the voices of nearly half of the church.

More interesting among the survey results is that while 65 percent of clergy present identified as progressive, they believe that only 34 percent of their congregations are predominantly progressive. (The lay estimate was 44 percent progressive.) That means that half of the progressive clergy present are currently serving congregations that are predominantly conservative. Why is there such a mismatch between pastors and congregations when it comes to theology? If there is such a mismatch in the current system, how can the church be restructured to ensure greater compatibility between clergy and congregation? If in the future there is some sort of grouping of congregations within the UM Church according to theological perspective, will progressive pastors allow their congregations to decide to belong to a different grouping than the pastor would identify with?

Uniting Methodists portrays itself as a “centrist” group that welcomes people of both progressive and conservative theological perspectives and would allow the practices of both perspectives to coincide without hindrance. There is a group within The UM Church that would respond to such a voice. Given the heavily progressive leanings of the group’s leaders and interested persons, however, that may not be an accurate portrayal. The attempt to hold together mutually contradictory theologies may only result in an uneasy truce that invites a return to conflict in the not-too-distant future.

In the final analysis, the church will need to decide: do we perform same-sex weddings or not? Do we ordain practicing homosexuals or not? Will we welcome gay bishops or not? There is not a lot of middle ground in those decisions.