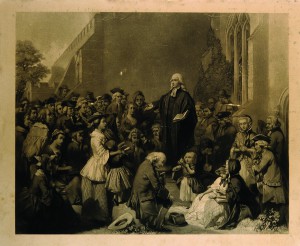 John Wesley and the early Methodists attracted many critics for their faithful ministry.

There is a new movement developing about which everyone in the church should be wary. While claiming to be faithful to the church, they are starting an organization that could potentially replace it. Like modern-day Pharisees, they promote a purification of our otherwise diverse and intentionally middle-of-the-road brand of Christianity. This organization is actually charging dues, which can do nothing but suck money from the coffers of our shared ministries. There are troubling associations between this group and those who have been destructively critical of the church in the past. They seem to downplay the resources of our official publishing houses in favor of their own. Those that don’t agree with the positions of their group are not even allowed in the door. This sort of thing is dangerous, potentially divisive, and can only lead the simple-minded astray. Faithful members of the church should remain very skeptical of this new movement if not oppose it outright.

Sound familiar? It should. These are the talking points of the critics of John Wesley and the early Methodists. The Eighteenth Century produced a plethora of anti-Methodist literature aimed at warning faithful Anglicans and people of reason against what they perceived as a fanatical and divisive movement that could only further harm a struggling church.

In his sermon “On the Ministerial Office,” Wesley styled the Methodist preachers “as extraordinary messengers, raised up to provoke the ordinary ones to jealousy.” And jealous they were. I suppose it is human nature to throw rocks at something we fear, or don’t completely understand. As he built an organization that transformed nations, Wesley spent a great deal of his time answering both official statements of concern by church leadership as well as swatting away a continuous volley of heckles from the cheap seats. (The blogosphere of his day came in the form of hastily printed pamphlets.)

You may also recognize the talking points of the Anti-Methodists in posts preemptively critical of the Wesleyan Covenant Association. These authors seem to completely miss the historic irony of Methodists discounting the potential value of a renewal organization rising up to stand next to an established ecclesial body. Methodism itself was founded as exactly this sort of parallel organization. The United Societies sprung from the Evangelical Revival in England as a movement promoting vibrant Christian ministry, faithful to scripture and deeply committed to both social and personal holiness.

There are those who build and those who critique. Both have their roles. (Constructive critique is actually quite valuable and welcome.) Made to choose, I would rather be among the Builders. That is how Wesley expended his enormous efforts. He was willing to take the arrows that are invariably aimed at leaders. As one voice committed to both the UM Church and WCA, I choose to believe that the best days of the Wesleyan Movement still lie ahead. I am eager to partner with like-minded folks who want to discover that future together – even as our denomination chooses its course.

So let the new anti-Methodists fire away. Those preparing for future electronic pamphleteering may consider these additional proven Eighteenth Century themes:

• “The Conveners of the Movement: Suspicious Characters All”

• “Behind Closed Doors the Organization is Secretly and Deservedly Falling Apart”

• And, of course:  “Who Do Those People Think They Are, Anyway?”

Chris Ritter is is directing pastor of a multi-site ministry in Illinois that includes Geneseo First United Methodist Church, Cambridge UM Church, and Roots QC (a new church start in Rock Island). He represented the Illinois Great Rivers Annual Conference at the 2016 General Conference and is the author of Seven Things John Wesley Expected Us to Do for Kids (Abingdon). Reprinted by permission from Chris Ritter’s blog at www.peopleneedjesus.net.