The Consolation of Listening 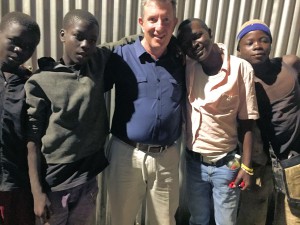 The Rev. Max Wilkins with “street boys” of Kisumu, Kenya.

“Listen carefully to my words; let this be the consolation you give me.” – Job 21:2

“Just give them some words of encouragement.”

The assignment from the Rev. Michael Agwanda, director of Life for Children Ministries in Kenya, seemed simple enough. It was 9:30 p.m. and I was about to head out to meet with some of the thousand or so “street boys” of Kisumu – all homeless, penniless, and mostly forgotten. As we approached the first group, just settling on the sidewalk for their night’s rest, I found myself uncharacteristically at a loss for words.

What words would I have for abused, neglected, and abandoned boys of 11, 12, or 13? What comfort could I share with integrity? Their circumstances seemed so desperate, so hopeless. So, with no great words of wisdom coming to me, I prayed.

The Lord simply said, “Ask them their names.” So I did.

“My name is Godfrey,” one boy said, with a soft, almost shy voice that belied his street hardened countenance. Godfrey, an English name that literally means “the peace of God.” It was not what I expected.

More unexpected, however, was the smile. It seemed almost out of place amidst the strong odor of unwashed bodies, the ragged clothing that had become a color one could only describe as “urban grime,” the cracked and worn feet calloused by shoe-less days, and the ubiquitous glue bottles. The challenges of daily life for these boys are hardly joy inducing. Yet Godfrey lit up in a genuine smile, a smile that reached his eyes and brought light even in the darkness.

“My name is Godfrey,” he said, and he smiled.

Jesus tells a parable about a rich man and a poor man. In the story, the poor man is dumped each day on the stoop of the rich man’s house, where he suffers and begs. We never learn the rich man’s name. In fact, we never learn anyone’s names in the parables of Jesus – anyone, that is, except the poor man in this story. Jesus tells us that his name is Lazarus (which means “the one who God helps”).

I used to wonder why, of all the people in all of Jesus’ parables, only Lazarus is given a name. I don’t wonder any more. I think Jesus wanted us to know that in His Father’s Kingdom those who seem unimportant, irrelevant, left out, and forgotten, are nevertheless of great significance to God. He knows each name, each story, and each one matters to Him. To know a person’s name is to value their existence and to enter into their story.

I don’t know how long it had been since anyone had asked Godfrey his name. But he wanted me to know it. I asked him to tell me his story. I learned that his father was dead. His mother was a drug addict who had taken up with another man, also a drug addict. Both adults were physically abusive and neglectful, eventually throwing Godfrey out to fend for himself. And though his story is painful and difficult, he seemed to relish the  opportunity to tell it. He had a story and it mattered to someone.

In the book of Job we find a man who has become about as destitute as one can become. His family, wealth, health, and status have all been taken from him. As he suffers alone, scraping the sores on his body and wanting to die, some friends try to offer him some words of encouragement. After these men have failed over and over to give Job any real comfort, he finally implores them: “listen carefully to my words, and let this be the consolation that you give me.” What he most wants is for someone to listen to his story with care; to hear him. To Job, this is the best (and perhaps only) consolation his friends can offer. 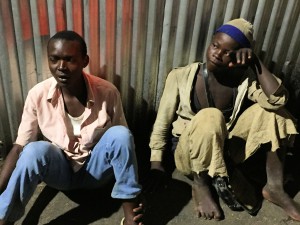 Although we had taken bread and milk out with us to share with the boys, I suspect that food was not what they needed most. I believe Godfrey needed someone to ask his name, to hear his story, to help him continue to hope and believe that he mattered both to God and to other people. And by the grace of God, that need is one that every believer is capable of meeting in others. We need only be present, and in being present, share the presence of God in the lives of others.

As we prepared to leave, I asked the boys if I could get a picture with them so that I could remember them and their stories. I promised I would pray for them. They happily agreed to the photo. What I wasn’t expecting was that just as the picture was being snapped, Godfrey would gently lay his head on my shoulder. Godfrey means “the peace of God,” and that night, if only briefly, I believe the peace of God was present in that place.

Many of us have sung Tommy Walker’s powerful worship song “He Knows My Name.” The lyrics are beautiful. They are also true.

I have a Maker / He Formed My Heart

Before even time began / My life was in his hands

I have a father / He calls me his own

He’ll never leave me / No matter where I go

He knows my name

So often the greatest gift we can bring to others is to be the presence of the Father in their lives and know their names and their stories. Sometimes that is the very consolation the world needs. And it is often in those moments that the Kingdom comes – for us and for others.

Max Wilkins is the president of TMS Global (formerly The Mission Society, www.themissionsociety.org).