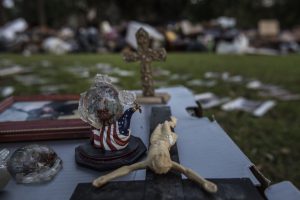 Items lay out to dry from flood damage from Hurricane Harvey. Photo by Kathleen Barry, UMNS.

“Creation itself will be set free from its bondage to decay and will obtain the freedom of the glory of the children of God. We know that the whole creation has been groaning in labor pains until now; and not only the creation, but we ourselves, who have the first fruits of the Spirit, groan inwardly while we wait for adoption, the redemption of our bodies. For in hope we were saved. Now hope that is seen is not hope. For who hopes for what is seen? But if we hope for what we do not see, we wait for it with patience.

“Likewise the Spirit helps us in our weakness; for we do not know how to pray as we ought, but that very Spirit intercedes with sighs too deep for words” – St. Paul (Romans 8:21-26).

This tilted rock that we call planet earth has been groaning. You can almost hear the geological grinding of planetary distress; above, in an expensive international tin can, astronauts peered down below at tight eyes of sprawling white storms, islands usually illuminated gone black. While the International Space Station hurtles through orbit with multiple sunrises and sunsets a day, it is emblematic of humanity’s hopes for the best in us: exploration, cooperation, respect, discovery. But astronauts get the news too, and I wonder what continent they were speeding over when word came that an American took bags of weapons into a hotel so that he could harm as many concertgoers as possible before ending his own life. 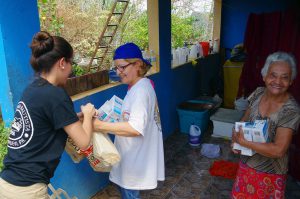 Water and food were the most pressing needs in the Jayuya area of Puerto Rico. Photo by Gustavo Vasquez, UMNS.

Houston floods, a city soaked, humid, and moldy. Mexico City shakes as tectonic plates grind, turning buildings to rubble. Multiple Caribbean islands brace against wind, power outages, blocked roads. Puerto Rico goes dark, patients stranded in upper-level cardiac units of hospitals where temperatures swell over 105 degrees. Las Vegas crumples, stunned, as the tourist destination known for pleasure, excess, and entertainment weeps while dawn breaks over broken bodies and overwhelmed hospital staff members. The British Isles brace when Ophelia sweeps in from the ocean, knocking trees down on cars with people in them, brushing electricity off for hundreds of thousands of residents. California burns with ferocity, blackened beams angled crookedly where homes once stood. The Rohingya people continue to stream away from genocide in Myanmar with tales of atrocities. Kurdish cities evacuate as Kurdistan and the Iraqi government go toe-to-toe over oil-rich territory now vacated by ISIS. A young man walks into a New Mexico library and shoots employees. Los Angeles comes face to face with its own ugly corruption, power and wealth buckling under the weight of one too many women saying, “me too.”

When Florida prepared for potential catastrophe from Hurricane Irma, I wrote this note to friends on social media:

You are loved, and you’re being prayed for. You’re not alone. But I can’t promise everything will be okay. I’ve seen a lot of kind, inspirational Bible verses suggesting that God has promised that you’ll be safe. The thing is, you might not be. Tragedy happens in this world, like the joyful saint I knew growing up who was killed in a car accident leaving church after volunteering.

Being someone who believes in God doesn’t give you supernatural AAA. It’s not insurance. The Apostle Paul was shipwrecked. Simon Peter was crucified. They had the same Old Testament you do, with scriptures about God’s protection.

Here’s what I can tell you.

1) Loss, death, and grief don’t disprove faith in God. They are equal-opportunity realities that descend on every human. We live in a finite, hurting world. It hurts, and we scream and rage, and that is ok. There’s a whole book in the Old Testament called Lamentations.

2) We pray. I don’t understand why sometimes doctors shake their head and mutter, “I hate this word but it’s a miracle,” and why sometimes, miracles seem to be withheld. Because of this we must be very careful when we claim, “God protected me” while our neighbor’s house was flattened. We pray for protection for ourselves and others; but we also pray for peace, for grace, for other people in the world suffering at the same time. We give thanks for infrastructure and FEMA and aid organizations. We pray for relief workers and hospital staff working long hours. We pray for kids who are scared. We pray for animals.

3) There’s a Bible verse that is descriptive: “The rain falls on the just and on the unjust.” Whether rain is a good thing, for farmers with dry crops, or a bad thing, like floodwaters in Houston, we live in a natural world. Nature is real. Whether you’re a kind person or a jerk, we both experience forces of nature. It might not seem fair – you’ve been law-abiding and your house and belongings are ruined, and your wife-abusing neighbor’s house was spared. If you believe in an all-powerful God, it’s not inconsistent to say both that God controls the universe and that air currents, the slight dip in your street, and the choices of the contractors who built your house are all real factors.

4) Take stock of what really matters. Where in your life have you been coasting? What have you been putting off? Let these experiences drain your fear rather than magnify it.

We are tired of hashtags. #HoustonStrong. #MexicoCityStrong. #PuertoRicoStrong. #VegasStrong. #CaliforniaStrong. Whose city is next? Whose church? In the face of natural evil – catastrophic weather events, earthquakes, wildfires – we also witness human evil: the desire to make other human beings suffer for his own twisted purposes, punishing all who witness it by making certain he died before anyone could ask him why he was doing this. What extraordinary spite.

If hurricanes, earthquakes, and wildfires remind us how relatively powerless we are on this tilted, groaning rock, a man firing out of a hotel window, or brutal soldiers killing children in an ethnic scourge, remind us how evil we are capable of being. We have met the enemy, and he is us.

When we are weary of multiple tragedies unfolding so quickly we cognitively cannot keep up with it, what happens to our hearts? Every time a new tragedy hits the news crawler, does your blood pressure spike? Are you numb? Have you become deaf to groans as a coping mechanism? Do you fatalistically believe it’s God’s mysterious will that children in Myanmar and Mexico City die? Do you turn off the news and read an idyllic book that paints a different picture of reality? Do you leap to activism, collecting water, donating money, lobbying for bump stocks to be banned, shoveling out moldy linoleum from a neighbor’s ruined home?

Every time something bad happens, variations of the same meme appear on social media: a quote from Mr. Rogers, whose mother told him that when something bad happened, to look for the helpers – in other words, to see the goodness of humanity, the kindness and love pouring out for each other. To a degree, it’s a beautiful response. Yet even beautiful responses can lose their power when the same quote is posted a dozen times in a month. We get compassion fatigue; we get news fatigue; we get imagination fatigue. In part, this jaded weariness comes from a very childlike place: “but we had hoped…”

Does that phrase sound familiar? It’s one of the saddest phrases in scripture, coming from a downcast disciple walking with a friend and a stranger on the way to Emmaus.

He said to them, “What are you discussing with each other while you walk along?” They stood still, looking sad. Then one of them, whose name was Cleopas, answered him, “Are you the only stranger in Jerusalem who does not know the things that have taken place there in these days?” He asked them, “What things?” They replied, “The things about Jesus of Nazareth, who was a prophet mighty in deed and word before God and all the people, and how our chief priests and leaders handed him over to be condemned to death and crucified him. But we had hoped that he was the one to redeem Israel” (Luke 24:17-24). 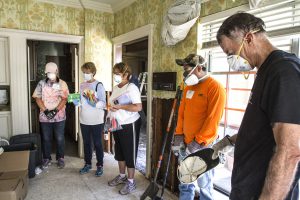 This unknown stranger asked them questions and let them talk: what is on your mind, and what is your interpretation of the things on your mind? And their grief, disillusionment, and fatigue all come pouring out.

When one of Jesus’ best friends, Lazarus, died, before Jesus sobbed at the pain of death and grief that afflicts all humanity, he had to talk to Lazarus’ sisters. Mary wouldn’t come out of the house to see him. Martha did, and was the first to throw out words that stung like vinegar: “Lord, if you had been here, my brother would not have died.”

If you had been here, God, it would have been alright. We had hoped you would come in time. But you show up now?

If anyone else had said it, it would have been a condescending platitude: you’ll see your brother again. And Martha, with orthodox faith for the future but little hope for the present, responds, knowing it will be alright someday. Not now, but someday. She cannot picture a present where things are made better.

Martha went back to the house and quietly told her sister that Jesus was asking for her. Mary emerged quickly from the house, her friends sitting in grief with her following her, and as Mary approaches Jesus, none of the right Sunday school answers come out. Instead, the words hit him in the face again: “If you had been here, my brother would not have died.”

And when Jesus saw Mary sobbing – Mary, who had neglected kitchen duty with her sister to sit at Jesus’ feet with men and learn – when Jesus saw Mary and her friends sobbing with no right answers, only questions, Jesus was “greatly disturbed in spirit, and deeply moved.” And as he asked where Lazarus was buried, he began to sob.

There are times when arguments about the sovereignty of God won’t cut it. Hope without compassion is a sterile, self-centered escape plan. But compassion without hope is just as fatalistic, drying into weary despair.

Jesus didn’t scold Mary. Jesus looked at her. And when the Word Made Flesh looked at Mary, the tears came and wouldn’t stop. He was disturbed from the inside out, irreversibly moved. There was a shuddering earthquake in the heart of the Trinity. The Word Became Flesh, and sobbed. Not much later, the body of Christ would be broken for Mary, for Lazarus, for Martha, for families in Mexico, for kids in Myanmar, for women shakily calling 911 after assaults, for country music fans helping each other escape over fences, for mass shooters, for me, for you. But when Jesus looked at Mary, the heart of Christ was broken.

Later, Paul would write to early Christians in Italy that the “Spirit intercedes with groans too deep for words.” 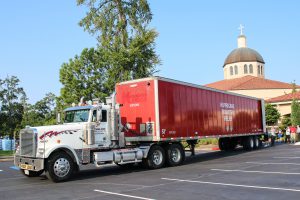 Paul asks us to quiet our hearts and listen in hope for the sounds of the Spirit interceding for us with groans too deep for words. It is the sound of the God who grieves. Christ has died; Christ is risen; Christ will come again. These words give order to our own grief. We don’t have a high priest who is unable to sympathize with us: Jesus Christ died. When Christ died, death itself got a final notice. And when Christ comes again, that last enemy, death, will be destroyed.

Meanwhile, we do not weep alone.