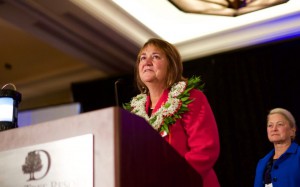 After the consecration of the Rev. Dr. Karen Oliveto as bishop by the Western Jurisdiction. UMNS photo.

According to a United Methodist News Service article published on August 23, 2016 – more than one year ago – Bishop Grant Hagiya, president of the Western Jurisdiction’s College of Bishops, said then newly-elected Bishop Karen Oliveto, an open lesbian married to a UM Church deaconess, “faces multiple complaints under church law.”

Hagiya responded as follows: “Due to Judicial Council Ruling 1341 [April 2017], and under advisement of our legal counsel, we dismissed the original complaint without prejudice, and opened up a new complaint submitted in light of 1341 to deal with any issues pertinent to the new ruling.

With all due respect, concerned lay persons and clergy view this as an ecclesiastical three-card monte sleight of hand. Yes, we are aware there is a portion of United Methodism that is downright giddy about Oliveto’s election. And we are well aware that the new caucus group “Uniting Methodists” is at least publicly indifferent – neither heartbroken nor celebratory – about Oliveto’s election, consecration, and episcopal leadership. However, there are the vast majority of United Methodists who believe that this process lacks credibility and transparency. For them, it is about the integrity of the process and the heart of accountability within United Methodism.

According to church law, the status of complaints against a bishop must be reported after 120 days. However, if the parties involved in the matter have not reached a resolution they can request an additional 120 days, and, if necessary, another 120 after that. Apparently, Oliveto’s colleagues in the West are attempting to indefinitely postpone any decision for their colleague. They think the church’s sexual ethics, teachings on marriage, and its ordination standards are wrong. While they are certainly entitled to their opinions, their actions – or lack thereof – are raising serious questions about the possibility for church unity and trust.

What comes of a church when some of its bishops cavalierly decide which laws they will and will not enforce? What comes of church unity when some of its leaders are patronizingly dismissive of values held by the vast majority of United Methodists across a global denomination? And what comes of trust when bishops give the appearance they are protecting one of their own when it comes to legitimate complaints?

Lest we forget, several bishops issued statements lamenting Oliveto’s election as a breach of the church’s covenant and its unity. The Council of Bishops’ Executive Committee, citing “the great importance of the matter,” encouraged the Judicial Council to take up the matter as soon as possible. United Methodists rightly expect a just and timely resolution of this case. At this juncture, the Western Jurisdiction bishops’ failure to push for timely action would be indicative of their arrogance and disdain for the wider church.