What Separation Means for U.S. Churches 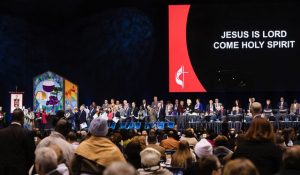 The legislation that would implement the Protocol for Reconciliation and Grace through Separation has been completed. It has been sent for formatting and will be forwarded to several annual conferences that are supposed to have special sessions in order to adopt the legislation and submit it to General Conference. Those sessions need to occur before the middle of March, so that the legislation can be submitted before the 45-day deadline prior to General Conference.

As the legislation is released publicly, probably within the next week, more details will be available as to how separation would work under the Protocol. Future articles will address various aspects of the Protocol plan in coming weeks. This article will look at how separation might affect churches in the United States. Note that nothing has been decided or will become final until General Conference takes action on these proposals in May. The delegates may choose to change some provisions of the Protocol Plan (although the mediation team hopes that it remains relatively intact as it is).

The first decision regarding how churches will align, whether with a New Methodist Denomination or with the continuing United Methodist Church, will be made in some annual conferences. The Protocol requires a 57 percent vote by an annual conference in order to align with a New Methodist Denomination. If the conference does not vote (a vote is not required) or does not achieve 57 percent, it will remain in the post-separation United Methodist Church.

In order to be eligible for annual conferences and local churches to vote to align with a New Methodist Denomination, a leadership group that is promoting such a denomination must register with the Council of Bishops prior to May 15, 2021. The leaders of a New Traditionalist Methodist Denomination will be ready to register on the day General Conference adjourns (May 15, 2020), so that annual conferences and local churches can consider aligning with that traditionalist denomination very soon.

The local church decision would be made by a meeting of the church conference, which includes all professing members present and voting (no absentee ballots). The district superintendent must call such a church conference within 60 days of a request by the pastor or the church council (or equivalent leadership body). The church council would need to decide ahead of time whether the margin for a decision to align differently from the annual conference would require a simple majority or a two-thirds vote, based on that local church’s context. If the highest value in that local church is unity, it might choose a two-thirds vote. If the highest value is honoring the convictions of the majority of the congregation, it might choose a simple majority vote.

Local churches would have until December 31, 2024, to take a vote on aligning with a New Methodist Denomination.

The Protocol Plan also contains provisions allowing local churches to withdraw from The United Methodist Church and become independent, not aligning with any New Methodist Denomination. These provisions are necessary because ¶ 2553 passed by the St. Louis General Conference last February is being challenged due to voting irregularities.

The provisions for churches to become independent are similar to what was passed in ¶ 2553. Such a decision would require a two-thirds vote of the church conference (all professing members present and voting). The local church would keep its property, assets, and liabilities. The local church would have to be current on the previous 12 months’ apportionments and pay an additional 12 months’ apportionments. It would also have to pay its share of the annual conference’s unfunded pension liabilities, an amount that can run anywhere from roughly three to six times their annual apportionment. Pension provisions adopted in St. Louis provide for the possibility of a payment plan for these liabilities.

Local churches would have until December 31, 2024, to vote to become independent.

This article gives the basics of what the separation process would be in the U.S. There may well be additional questions that are not answered here. I invite you to send your questions via reply email, and I will try to address them in a future article.