Too Clever by Half

By Walter Fenton – The Western Jurisdiction’s election of an openly gay clergywoman as a bishop of The United Methodist Church essentially smothered developments at other jurisdictional gatherings this past July.

Of course, other bishops were elected; some were conservative, some centrist, and others progressive. Suffice it to say that the Council of Bishops will be substantially the same over the next quadrennium. Which is to say divided, and therefore unwillingly or unable to lead, even when it comes to promoting our church’s teachings and enforcing a clergyperson’s fidelity to them.

Given the lack of accountability it surprises no one anymore that progressives continue to push the envelope when it comes to achieving by ecclesial defiance what they cannot through “Christian conferencing.” The election of an openly gay bishop is now the primary indicator their strategy is working.

But it’s not the only indicator. For example, at the Northeastern Jurisdictional (NEJ) Conference in Lancaster, Pennsylvania, delegates approved resolutions that flaunted the Book of Discipline’s teachings on same sex marriage and the ordination of openly gay clergy.

Some of the resolutions passed with broad support. One resolution, which called for non-compliance with the Discipline, garnered 60 percent of the vote even though the delegates knew the NEJ College of Bishops would have to rule it out of order.

Similar resolutions were, however, ultimately ruled in order because friendly, or what others might call cynical, amendments allowed for their approval.

For instance, a proposal calling for the NEJ College of Bishops to refuse to hear complaints, initiate investigations, or conduct church trials for pastors who preside at same sex services or self-avow as an openly gay clergyperson was initially ruled out of order by Bishop Thomas Bickerton, who said it called for bishops to violate the Book of Discipline. However, he did allow the body to debate it. 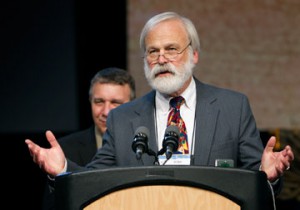 The Rev. Gere Reist, the widely known outgoing secretary of the denominations’ General Conference, offered the following amendment: that NEJ annual conference councils on finance and administration (CFAs) simply “state that there are no funds available for initiating and processing of complaints and initiating of investigations and trials based upon the sexual orientation or marital status of faithful United Methodists or involving clergy for conducting same-sex weddings.”

It was one of the most cynical proposals we have ever witnessed. Clearly Reist had not consulted with the CFAs to determine whether such a statement were true or not. It also ran headlong into the UM Church’s constitutional provision that all clergy have a right to trial. And finally, it would have CFAs state they have “no funds available for initiating and processing of complaints and initiating of investigations and trials” only in cases having to do with clergy presiding at same-sex weddings or identifying as openly gay.

Initially, the progressive majority marveled and rejoiced at Reist’s clever amendment. And even Bickerton congratulated him for a maneuver that would now allow the bishops to rule the resolution in order.

One delegate, who supported the amendment, wondered aloud if it wouldn’t be best, in the interest of fairness, to ask the CFAs to say they have “no funds available for initiating and processing of complaints and initiating of investigations and trials” for any judicial cases.

For maybe a minute, the body seemed genuinely challenged by the idea, but after mulling it over a bit, decided no, CFAs should just say they don’t have funds for certain complaints, investigations, and trials. Apparently, in the case of a pastor encouraging her congregants to withhold their tithes and gifts from an ethically challenged annual conference, funds could be found for judicial proceedings.

A brave delegate from the Baltimore-Washington Annual Conference then rose to the floor and had the impertinence to ask, “I have trouble with this amendment; aren’t we essentially asking people to lie?”

For a few moments the assembled pastors and lay delegates – the recognized leaders of an entire jurisdiction of the UM Church – were sobered by the question. But ultimately 96 of the 160 voting delegates decided the ends justified the means; asking people to lie in the interest of the LGBTQ+ agenda seemed fine with them.

Later, the NEJ College of Bishops informed the delegates it would have to rule the entire amended resolution out of order if its title, “Stop the Church Trials,” remained a part of it. The delegates voted 111 to 53 to strip the title so the proposal as amended by Reist would stand.

Finally, another brave soul, this time from the Eastern Pennsylvania Annual Conference, requested a decision of law regarding the legitimacy of the resolution. The presiding bishop said he would issue a ruling in 30 days.

Walter Fenton is a United Methodist clergyperson and analyst for Good News.