Fans gather at Graceland to commemorate the 40th anniversary of the death of Elvis Presley. Photo courtesy of Graceland.

Forty years after his tragic death, Elvis Presley remains the legendary performer that, as Bob Dylan put it, “crash landed from a burning star onto American soil.” Amazingly, he still enjoys unparalleled worldwide popularity. In August, more than 50,000 showed up on the 40th anniversary of his death to remember the rockabilly superstar. Last year, Graceland injected $137 million into a spectacular expansion in Memphis. Elvis may have left the building, but his fans have not.

Presley is one of the most pivotal and enigmatic pop culture figures in American history. As a young man, he was raised in poverty and southern Pentecostalism. He attended a conservative Assemblies of God church, but would often sneak off to listen to the music and preaching at a black church less than a mile away. Although best known for the swivel of his hips, Elvis loved gospel music and dreamed of singing it professionally. His career launched at Sun Records, however, took him on a different trajectory – the pinnacle of rock ‘n’ roll stardom.

When Elvis rolled into Jacksonville, Florida, on August 10, 1956, Judge Marion Gooding had prepared an arrest warrant for Presley, charging him with impairing the morals of minors in the event that Elvis shook his hips. Young people at the Murray Hill Methodist Church heard Elvis denounced in a sermon titled, “Hotrods, Reefers, and Rock and Roll.” Elsewhere in town, Robert Gray, pastor of Trinity Baptist Church, offered up prayers for Presley’s salvation after declaring that the singer had “achieved a new low in spiritual degeneracy.”

The Rev. Gray gained national notoriety after being featured in Life magazine. Elvis later confessed frustration at the preacher’s actions. “I think that hurt me more than anything else at first. This man was supposed to be a religious leader, yet he acted that way without ever knowing who I was or what I was like,” said Presley. “I believe in the Bible. I believe that all good things come from God…I don’t believe I’d sing the way I do if God hadn’t wanted me to. My voice is God’s will, not mine.”

In the midst of remarkable fame and fortune, he struggled to find his way. After the Easter service at First Assembly of God in Memphis in 1958, Elvis told the Rev. James Hamill, “Pastor, I’m the most miserable young man you’ve ever seen. I’ve got all the money I’ll ever need to spend. I’ve got millions of fans. I’ve got friends. But I’m doing what you taught me not to do, and I’m not doing the things you taught me to do.”

Elvis told his friend Pat Boone, “I wish I could go to church like you.” After Boone told him he could, Elvis replied, “No, they wouldn’t leave me alone. I would distract the minister.” Acknowledging the potential difficulty, Boone told me many years ago that he assured Elvis that “if they see that you are coming for the same reason that they are, all of that would ease away and you could actually worship freely like everybody else. And it would do you a world of good, Elvis.” According to Boone, Elvis “felt like he couldn’t go anywhere in public. So he was sort of imprisoned. I felt like he lived like Public Enemy #1 instead of the King of Rock ‘n’ Roll. It stunted his social and spiritual growth.”

Like so many other young Americans during the 1960s, Elvis explored exotic Eastern religions and experimented with drugs. He was, by all accounts, an eccentric religious seeker on turbo drive. One man who seemed to tap into that spiritual desire was a 24-year-old hairdresser named Larry Geller who told Elvis that he was most interested in discovering three things: “where we come from, why we are here, and where we are going.” This was the key to unlocking Elvis’s attention. “Whoa, whoa, man. Larry, I don’t believe it. I mean, what you’re talking about is what I secretly think about all the time,” said Presley.

Those were the kinds of transcendent questions that haunted Elvis’s soul. He saw through the shallowness of stardom, 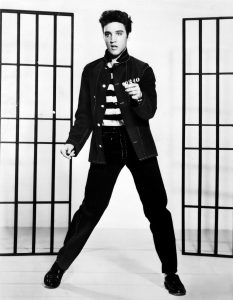 but was a prisoner to his own success. In turn, Elvis consumed books on Hinduism, Judaism, numerology, Theosophy, positive thinking, the new-age, and meditation. Although he explored and researched many diverse religions and practices, he never abandoned his faith in Christianity. He was a true believer, but he also had the appetite of a spiritually starved sojourner.

“All I want is to know the truth, to know and experience God,” Elvis said. “I’m a searcher, that’s what I’m all about.”

Throughout Presley’s life, gospel music was the constant element of solace to the man who was burning the candle at both ends. He would spend hours singing gospel with his friends around a piano after his shows. The only Grammy awards he earned were with his gospel records. To many fans, he is as well known for “How Great Thou Art” as he is for “Blue Suede Shoes.”

It was the sequined jumpsuit Vegas years in the 1970s that seemed to drain so much of Elvis’s vibrancy. Presley struggled with womanizing, pill-popping, reclusiveness, and uncontrollable weight gain. He turned to uppers, downers, and painkillers to dull the ache of depression and loneliness. Fame was a wicked mistress and Elvis and his entire entourage knew it. Even then, however, he tried to keep his head above water.

As if to reconnect with his faith, Elvis hired gospel groups such as the Imperials, the Sweet Inspirations, and J.D. Sumner and the Stamps to sing back-up for him while he was in Las Vegas. Surrounded by all of the glittery temptations that Sin City had to offer, Elvis appeared to want to provide a glimpse of the sacred – for his audience or, more importantly, for himself.

It would be a mistake to describe what went on in the Vegas shows as a revival meeting under neon lights. Nevertheless, Presley appeared to be hungering for the security and peace that he found in the faith of his younger years. He was one of the only rock performers who recorded religious music – crossing back and forth over the divide between the secular and the sacred.

Gospel singer J.D. Sumner tells of a woman approaching the stage in Vegas with a crown sitting atop a pillow. “It’s for you,” the woman told Elvis. “You’re the King.” He took her hand, smiled, and told her, “No honey, I’m not the King. Christ is the King. I’m just a singer.”

In December 1976, Elvis requested that the Rev. Rex Humbard (1919-2007), a popular television minister, and his wife Maude Aimee meet with him backstage in Las Vegas in between sets. “Jesus is coming back really soon, isn’t he, Rex?” Elvis said as he began quoting all kinds of Scriptures about the Second Coming. “It really shocked me that Elvis knew all of those Scriptures from the Old and New Testaments about the Lord’s return,” Humbard told me in an interview in 2002.

Maude Aimee told Elvis about her prayer that he would fully rededicate his life to God. According to Humbard, “Elvis went all to pieces. He started crying. She shook him up by that statement.” As the four of them held hands and prayed, “he rededicated his heart to the Lord,” recalled Humbard. “I asked God to bless him and to send His spirit into his heart and meet his every need.” During the evening’s second show, Elvis dedicated “How Great Thou Art” to the Humbards.

To be clear, Elvis was dealing with a runaway trainload of emotional, physical, and spiritual issues during his time in Vegas. Elvis was not a saint, and no one knew that better than Presley himself. He was an enigma who touched a spiritual and cultural nerve in American culture. There is, of course, no one else on the planet who can attract more than 50,000 fans to his gravesite to recognize the 40th anniversary of his death. At previous memorial events, fans recited the Lord’s Prayer, repeated the 23rd Psalm, and joined together in singing “How Great Thou Art.” 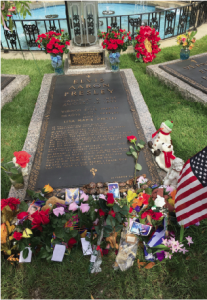 When he died, Elvis had fourteen different drugs active in his system. There are plenty of lessons to be gleaned from his tragic death but they should be absorbed through the prism of sorrow, grace, and gratitude. To millions of fans, his life was a spectacular gift – a concoction of rockabilly, gospel, and soul.

At his funeral, the main address was given by the Rev. C.W. Bradley, minister of the Wooddale Church of Christ in Memphis. He spoke of Elvis’s determination, decency, and his love of family. Bradley also acknowledged that Elvis was a “frail human being” and that “he would be the first to admit his weakness. Perhaps because of his rapid rise to fame and fortune he was thrown into temptations that some never experience. Elvis would not want anyone to think that he had no flaws or faults. But now that he’s gone, I find it more helpful to remember his good qualities, and I hope you do too.” His fans – saints and sinners alike – understood that.

The way in which a person dies is not always the best way to remember the pulse of their life. All of us have seasons of our lives that we would sooner forget. It is a worthwhile endeavor to work on extending mercy to others in the same way that we trust the good Lord will extend it to us. We could all use a little trip to “graceland,” even when we are remembering Elvis.

Steve Beard is the editor of Good News. This article is adapted from the original that appeared in Risen Magazine in 2002.