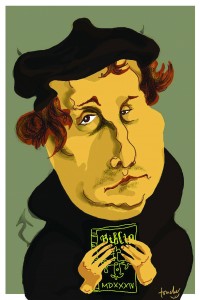 I once read through the first 30 years of Christianity Today. My professor wanted to know how evangelicals were thinking about Roman Catholicism. In the basement of the library, I huddled over microfilm, back aching, inhaling mold and dust, and discovered … very little. When I came back with little to show, my professor was surprised. There were articles on the Second Vatican Council, but they were mostly informational, explaining the developments to American evangelicals. Nothing juicy.

I tried to console him with pages of withering criticism for the World Council of Churches. He decided evangelicals just couldn’t be bothered with Rome. Silently, I thought otherwise. After all, Christianity Today was founded by Billy Graham, a friend of the Kennedys, a man who reported Pope John Paul II whispered in his ear, “We are brothers.”

Graham was just the beginning. In 1994, Charles Colson and Fr. Richard John Neuhaus co-signed the document “Evangelicals and Catholics Together.” The document was endorsed by prominent Methodist theologians Thomas C. Oden and Billy Abraham. Two years ago, Lifeway Resources reported over half of evangelical pastors in America view Pope Francis as their “brother in Christ.”

American evangelicals have developed an appreciation for Rome. We should welcome these transitions. In the years to come, evangelicals and Catholics will find common cause. We will work to preserve our traditions. We can help one another. After all, Rome made me a better Methodist.

I am an evangelical Methodist. My grandparents and parents are all evangelical Methodists. My parents met when my dad became the youth pastor at my mom’s home church, Weaver First United Methodist Church in Weaver, Alabama. Camp meetings were a fixture of our summers. All the spiritual guides of my early years knew how to linger at the altar.

As a child, the purpose of the church was clear to me: to make people holy. Of course, it was equally clear that not everyone in my church was a saint. I was, after all, a pastor’s kid. Waking early, I would find my dad on his knees. I know he prayed for patience. Like raising three boys at home, raising saints at church comes with frustration.

That there are many sinners in a congregation is no surprise. The Son of Man came to seek and save the lost (Luke 19:10). We don’t quit a gym because it has flabby members. But if its faithful members get flabbier, we would ask for a refund. The question for the church isn’t whether or not sinners are there, but does it reliably make them holy? Can its way to holiness be trusted?

Five hundred years ago, in 1517, a professor of theology penned ninety-five “theses” for debate. Professor Luther hoped for an academic debate about the buying and selling of indulgences. He set off the Reformation. Over the following years, from 1517 to 1521, Martin Luther found himself embroiled in refutation and litigation.

As Archilochus said, “While the fox knows many things, the hedgehog knows one great thing.” Utter dependence was Luther’s one great thing. He held to it with the tenacity of a tucked hedgehog. We utterly depend upon God for our creation. We utterly depend upon God for our continued life. When it comes to our salvation, the repair of our fallen state, our remarkable partaking in God’s nature (2 Peter 1:4), our dependence is all the more profound – it is utter. Luther taught utter dependence using the language of Paul: justification by grace through faith (Ephesians 2:8).

In Luther’s day, the Christian tradition possessed two great theologians of utter dependence: St. Paul and Augustine of Hippo. Luther, an Augustinian monk commenting on Paul’s letter to the Romans, followed them with characteristic resolve. Between 1517 and 1521, Luther connected utter dependence to the practice of selling indulgences to gain time off purgatory. To buy and sell indulgences was to deny utter dependence; there are no transactions when dependence is utter. Luther held to utter dependence with such confidence that he refused to recant, even at the cost of excommunication. His refusal set off the Protestant Reformation, and Christianity in the West was changed. 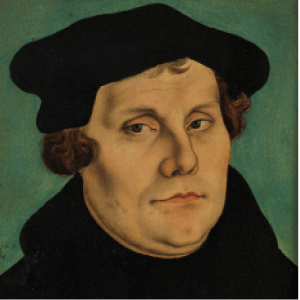 What we often call the Reformation was, in fact, several reformations. Luther’s reformation in Northern Germany was distinct from Calvin’s reformation in France and Zwingli’s in Switzerland. Over time, the church that excommunicated Luther, what we now call the Roman Catholic Church, reformed as well.

Remarkably, in 1999 Lutherans and Catholics reached a common understanding on justification by grace through faith, Luther’s utter dependence. The “Joint Declaration on the Doctrine of Justification” clarified the common understanding, and withdrew the Reformation-era condemnations of Rome by Lutherans and Lutherans by Rome. Methodists were quick to sign off on the document, seeing in it a confirmation of John Wesley’s own view of justification and grace.

Like the Church of England, Methodism is a tradition between. Ours is an evangelical tradition, but one that practices infant baptism. Laity have equal voice in establishing discipline, but they employ bishops to bring about their vision. In America, Methodism has long been an odd fit in the Protestant landscape: too evangelical for mainliners, and too mainline for evangelicals.

In the new world, Methodist between-ness sounded un-Protestant. From its founding, Methodism in America set about distinguishing itself from prominent forms of Calvinism. Our historic emphasis on holiness and on sanctification, to ears trained by Calvinist Orthodoxy, sounded like works righteousness. Methodists were charged with diverging from Paul, Augustine, Luther, and Calvin. They betrayed the central insight of the reformation: utter dependence.

John Wesley saw this challenge coming. His most scathing attacks were directed at Calvinist misunderstandings of the Reformers’ central insights. Wesley was unyielding in his rejection of the Calvinist view of God, to the point of calling their god “worse than the devil” in “Free Grace.”

Wesley vehemently denied that Methodists lost the reformation emphasis on utter dependence. His most thorough description of the Methodist doctrine of grace, “The Scripture Way of Salvation,” is clear that our only hope of salvation is dependence upon God’s grace. Repentance, admitting our hopelessness apart from God’s work, is the fitting posture to receive grace. But that repentance is God’s work in our lives. By grace, God leads us to repentance. And so the first word for Wesley was always grace: grace for repentance, grace for justification, grace for sanctification, grace for further repentance, grace for entire sanctification.

Luther’s resolve for utter dependence remains in Wesley’s thought and in Methodist doctrine. Indeed, the marks that set us apart from our evangelical brothers and sisters, our practice of infant baptism and insistence upon real presence, speak to our commitment to utter dependence. What better way to avoid thinking of faith as a work than to insist upon the baptism of infants? What better way to practice utter dependence than partaking in the body and blood of Christ made present? Wesley saw these connections between the Reformed doctrine of grace and the Anglican approach to sacraments.

Wesley’s genius was the integration of doctrine and practices. He was studied in doctrine and wise about the Christian life. Wesley developed this wisdom, theologically, into his unique way of salvation – the Wesleyan via salutis. That Wesleyan way grew out of Wesley’s reflection on the Christian life, on the practices that shape it, on the goal God has for it. Wesley’s doctrine of grace is lasting because it is integrated and effective. It draws together the whole of Christian life and practice. It leads to holiness.

I did not realize how deeply Christian these Wesleyan impulses were until, as a graduate student, I made a close study of Thomas Aquinas’s Summa Theologiae. In seminary, we were taught that Wesley was a practical theologian. It was occasionally whispered, with some embarrassment, he was a folk theologian.

When I came to Aquinas’s treatment of the sacraments, I realized that Wesley’s attention to practices for developing his doctrine of grace was a venerable Christian tradition. Rome’s theology of grace is developed, not in the forms of a Protestant way of salvation, but in reflection on the sacraments. For Rome, the sacraments unfold as a path for the pilgrim on the way to heaven. A journey begun at baptism continues by communion and confession. Similarly, Wesley insists that the baptized commune regularly and confess their sins to one another. Wesley’s band and class meetings, largely responsible for Methodism’s success, are a retrieval of the practice of confession, in Protestant form.

The theology of Rome, as Thomas Aquinas demonstrates, is an integrated vision of the faith. This vision unites all our knowledge of the God revealed in Jesus Christ with the accumulated wisdom of a faith practiced for centuries. Those practices rest on the fundamentals of the faith: the story of the Triune God, revealed in Jesus Christ, upon whom we utterly depend for our salvation.

The Roman way is a way to holiness. The lives of their saints – Mother Teresa, Francis of Assisi, Patrick, and Columba – show it to be a reliable way. It is a reliable path to the God.

Methodist theology, though we might forget it, is likewise integrated. Its way of life leads to the same Triune God, revealed in Jesus Christ, upon whom we utterly depend for our salvation. Its practices are likewise integrated into this vision of the faith. Those who practice our way will also find in it the God who wishes to make us holy.

The Roman way is a valuable one. It is one all Christians should be eager to preserve. But this cuts both ways. Our Methodist way to holiness is also valuable. Our way produces its saints – Francis Asbury, Phoebe Palmer, Dennis Kinlaw.

There is one Holiness, but many ways to holiness. This is what Wesley means by “The Catholic Spirit.” He said Christians, while they agree on essentials, will have different “opinions.” Essential to any way, if it leads to the God of Jesus Christ, will be fundamental agreement about who Jesus is. “In essentials, unity.” But there will be differences of “opinion.” Different ways to holiness will need to have many more beliefs, and many practices shaped by those beliefs, to guide us on our way to holiness. Roman Catholics go to confession, early Methodists went to band meetings. “In non-essentials, liberty.” Both are reliable ways because they lead people to their goal, the God who is Holy Love. “In all things, love.”

Christians should be thankful for these many ways, these many gifts. We should pray that God preserves the ways of our fellow Christians. Even while we attend to the preservation of our way.