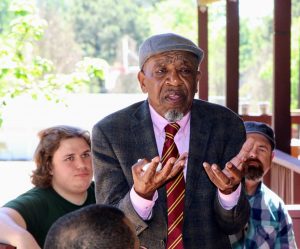 In 1972, Time magazine implemented what is now known as “Person of the Year.” Far from an automatic honor, this distinction merely designates someone as a representation of the year that has just passed. From popes to politicians, the list of those who have graced the cover includes powerful, and often power-hungry, men and women.

In response to this often-notorious award, World magazine established the “Daniel of the Year.” Over the last 23 years, honorees from the Christian news publication have included individuals such as missionary Andrew Brunson, humanitarian Baroness Caroline Cox, and persecuted Christians in China and Syria.

This year’s Daniel Award went to Dr. John Perkins, a longtime inspiration to many of the staff of Good News. Born in 1930, in Mississippi, Perkins saw and experienced some of the worst of racial tensions in the South. At sixteen, his twenty-five-year-old brother was shot by police, and by the time he left for California in 1947, he had “learned to hate all the white people in Mississippi.”

This, however, was not to last. God came calling when Perkins’ son Spencer came home from Bible classes singing “Jesus Loves the Little Children” – “red and yellow, black and white.” Curiosity-driven, Perkins dove into his own studies of the scriptures, and soon, professed faith in Christ.

“If I had not met Jesus I would have died carrying that heavy burden of hate to my grave,” Perkins says. “But he began to strip it away, layer by layer.”

Three years later, when the Perkins family returned to Mississippi, they set out to change things through nonviolent protest. Over the next decade, Perkins would become a prolific civil rights leader. He worked to support voter registration efforts in 1965, school desegregation in 1967, and in 1969 led a boycott of white-owned stores that welcomed black customers but refused to hire them.

Sticking to the path of nonviolence did not come easy. The temptation to fall back into his former hatred returned in 1970 when a group of officers nearly beat him to death in response to his civil rights efforts.

“They stuck a fork up his nose and down his throat,” writes Marvin Olasky of World. “They beat him to the floor, then kept on kicking him in the head, ribs, stomach, and groin.”

God used the hospital staff who treated his injuries to keep him from sliding. Nurses and doctors – both black and white – washed his wounds, helped him heal. They were symbolic of the people who had beaten him, Perkins writes in his book One Blood. What they did healed more than his body, it healed his heart.

“Nonviolence takes more strength than violence,” said Perkins, “and it takes more than just human strength. It takes God’s strength working in human beings to produce self-control, gentleness, and other fruit of the Holy Spirit.”

God also worked to produce a heart of compassion in him. The pain of parental abandonment created a particular soft spot for the outcast, the outsider, those left behind. Perkins describes rejection as a sort of internal death that occurs again and again but rejoices that it is for this kind of person that Jesus comes.

In an effort to respond to this convicting question, Perkins founded Voice of Calvary and Mendenhall Ministries. These two organizations have developed clinics and theology classes, created a housing cooperative, and opened thrift stores. In order to expand their reach, and to become more effective, Perkins also created the Harambee Christian Family Center, the John and Vera Mae Perkins Foundation, and the Christian Community Development Association.

God-given gentleness and compassion are at the heart of Perkins’ answer to racial reconciliation in our country. It is Christ who heals all wounds, who changes hearts, who makes us whole. However, we are also called to look inward, take stock, and then to act.

“The fruit of the Spirit is gentleness,” Perkins said. “It’s pretty hard to find this quality on display today. Our culture applauds people who are brash and arrogant. The self-promoter gets the most attention and the most encouragement. But God intends for His friends to be marked by gentleness.”

According to Perkins, biblical reconciliation affirms that “every human being is 99.9 percent identical in genetic make up. … All people, all kindred, all nations, all tongues. One blood.”

Repentance is also necessary for biblical reconciliation, according to Perkins, and he lets no one off the proverbial hook. From the damaging long-term effects of segregation to redlining in housing development, the white community needs to take responsibility for abusing its power. But, Perkins believes, the black community must also pause for personal assessment as well. He laments the “epidemic of violence within our own African American community [and] the breakdown of our families … We the Church are called to be the light that shines in these dark places.”

With such a life of forgiveness and passion for justice, it is no wonder he was designated as 2020’s Daniel of the Year. His patience and persistence is a model for our time.

“If we are going to help others understand who Jesus is, our own lives must reflect his character and love,” Perkins observes about our polarized culture. “It is at this precise moment that the watching world gets a glimpse of him.”