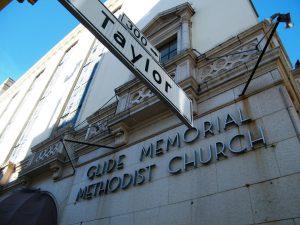 Resolution is finally in sight after two contentious years of strife between Bishop Minerva Carcaño of the California-Nevada Annual Conference (CNAC) and the leadership of Glide Memorial United Methodist Church in San Francisco, a progressive church with a well-established reputation for being the largest United Methodist church in the Western Jurisdiction and among the largest in the United States. The conflict in this situation was theological, as well as financial and related to power and control.

In a joint November statement, the two parties announced they “reached an agreement that provides for each entity to pursue different aspects of Lizzie Glide’s Trust as wholly separate and autonomous organizations.”

Both parties agree that Lizzie Glide’s trust, established in 1929, was created to “advance Christian Protestant religion, education, and charity in San Francisco. To fulfill her wishes, she installed Glide as trustee of property located at 330 Ellis Street, which she wanted used to benefit all the people of San Francisco, and to support the creation of an evangelistic training center for preaching and teaching in conformity with the doctrines of the Methodist Church.”

According to the statement, the physical property will be maintained by the Glide Foundation while the Glide Trust will be given to the California-Nevada Annual Conference to “carry out the mission of The United Methodist Church” and “advance Methodist teaching,” as well as leaving open the possibility that the annual conference will establish a new United Methodist congregation in San Francisco.

“Glide will transfer Trustee responsibility to CNAC for the Trust and will also transfer responsibility for a restricted fund that was established last century in large part to advance Methodist teachings. Combined, these accounts now contain $4.5 million in invested restricted funds that grew out of Lizzie Glide’s original contributions. The Trust will be renamed the ‘J.H. Glide United Methodist Trust’ and used to carry out the mission of The United Methodist Church – making disciples of Jesus Christ for the transformation of the world, sending persons into the world to live lovingly and justly as servants of Christ healing the sick, feeding the hungry, caring for the stranger, and freeing the oppressed.” Glide will also provide $1.5 million to CNAC, drawing from a separate account for investment returns.

Glide Memorial Church was launched into notoriety through the ministry of the Rev. Cecil Williams who served the church as lead pastor from 1964 until his “retirement” in 2000. In 1967 he removed the cross from the sanctuary in an attempt to make Jews, Muslims, Buddhists, Wiccans, and atheists/agnostics feel comfortable.

In a 2018 open letter to her annual conference, Carcaño stated, “Leaders from these [non-Christian] constituencies are quick to publicly state that they do not want the Celebrations, or the church, to be United Methodist or Christian in any form. Sunday Celebrations are uplifting concerts, but lack the fundamentals of Christian worship. Baptisms are conducted periodically but in the name of the people rather than from a Christian understanding of Baptism. Holy Communion was done away with some time ago and only introduced back into the life of the congregation this past Spring, but outside of the Celebration gatherings and with much resistance. We seek to be in good and loving relationship with persons of other faiths and beliefs, and those who claim no faith. However, this should never cause us to lose our own faith.”

According to Carcaño, “the great majority of the participants at Glide’s Sunday Celebrations claim other faiths.” Additionally, “there are also serious concerns about the governance and financial administration of the church,” Carcaño declared. “The church has no organizational structure to fulfill its responsibilities as per The Book of Discipline, and has not had a United Methodist organizational structure for decades. The only body that functions in any leadership capacity is a group of congregational leaders hand-picked by Cecil Williams who have never been elected or recognized by the congregation.”

The question became who was really running Glide? It became evident that the Glide Foundation was really the governing entity for the congregation. The Foundation receives millions of dollars a year for the social outreach ministry of the church, housing and feeding the homeless, providing ministry related to HIV/AIDS, and many other projects. In a 2018 guest editorial in the San Francisco Chronicle, Williams stated: “The Glide board of trustees controls the foundation’s resources, of which 95 percent support social programming, and 5 percent go toward church activities.”

Responding also in the Chronicle, Carcaño wrote, “In May, I attempted to appoint a senior pastor to Glide Memorial who was welcomed by the congregational leaders, but rejected by the Board of Trustees of the Glide Foundation.”

Despite the fact that there have been four lead pastors appointed to the church since 2000, including now-Bishop Karen Oliveto, Williams has continued to maintain leadership of the church and the Foundation. Two years ago, Carcaño described it this way: “No pastor has been allowed to exercise their rightful authority or responsibilities while serving at Glide. To this day, Cecil Williams and his wife, Janice Mirikitani, make all decisions in the background at Glide.”

As the conflict deepened, the Foundation acted to strip any mention of The United Methodist Church from its articles of incorporation in 2018, according to the Chronicle. Glide also removed the resident bishop from the board and specified that only funds and assets related to church operations would be held in trust for the denomination.

“As United Methodists, we respect all faiths, love all people, and are committed to working with persons of other faiths and goodwill to make the world a better place,” wrote Carcaño. “We also want to sustain our beliefs as Methodists.”

In their November joint statement, the parties appear to put the acrimonious past behind them. “Both CNAC and GLIDE are hopeful for a timely and successful approval by the Court followed by a new chapter in fulfilling Lizzie Glide’s wishes for future generations.”