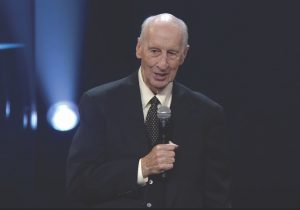 Pastor Jack Hayford being honored and presented an award at Gateway Church by Pastor Robert Morris in 2017. Originally launched in Los Angeles, The King’s University, a school founded by Hayford, is now located in Southlake, Texas, at Gateway Church.

Over the last 40 years, one of the most popular modern day hymns is “Majesty, Worship His Majesty” written by Jack Hayford. Congregations from all denominations around the globe have sung it with reverence and gusto.

Included in The United Methodist Hymnal, the song was written in 1977 while Hayford and his family were vacationing through England during the 25th anniversary of the coronation of Queen Elizabeth. As they roamed through historic Blenheim Palace, the birthplace and ancestral home of Winston Churchill, Hayford was inspired by the regal surroundings.

Thinking from the heart, he became mindful “that the provisions of Christ for the believer not only included the forgiveness for sin, but provided a restoration to a royal relationship with God as sons and daughters born into the family through His Majesty, Our Savior Jesus Christ.”

As he was driving around England, Jack asked his beloved wife Anna to write down the words and melody. “So exalt, lift up on high, the name of Jesus/ Magnify, come glorify Christ Jesus, the King.”

Hayford was filled with a powerful “sense of Christ Jesus’ royalty, dignity, and majesty …. I seemed to feel something new of what it meant to be his! The accomplished triumph of his Cross has not only unlocked us from the chains of our own bondage and restored us to fellowship with the Father, but he has also unfolded to us a life of authority over sin and hell and raised us to partnership with him in his Throne – Now!”

This is one of the many insights in Pastor Jack, the exceptional new biography of Hayford and his remarkable and prolific ministry as pastor, Bible teacher, author of 50 books, writer of more than 600 worship songs, church leader, and Christian statesman. It details the struggles and triumphs over Hayford’s 30 year pastoral guidance of The Church on the Way, his denominational commitment to The Foursquare Church, and to his larger role as an irreplaceable bridge-builder between Pentecostal/charismatic believers and the wider ecumenical Church.

Quite fittingly, Hayford’s international notoriety sprung from the memorable worship song. His thoughts on worship are a key factor in comprehending the longevity of his ministry. “In both the Old and New Testaments,” Hayford taught, “God’s revealed will in calling his people together was that they might experience his presence and power – not a spectacle or sensation, but in a discovery of his will through encounter and impact.”

As a leader, Hayford was also faithfully committed to prayer, biblical exposition, racial reconciliation, teaching on the Kingdom of God, pursuing a supernatural ministry through a “crucified life,” praying for churches and leaders outside his own Pentecostal tradition, discerning the difference between “holy humanness and human holiness,” developing a “passion for fullness,” teaching on the “beauty of spiritual language” (speaking in tongues), and maintaining irrevocable honesty in his heart.

“My commitment to walk with integrity of heart calls me to refuse to allow the most minor deviations from honesty with myself, with the facts, and most of all, with the Holy Spirit’s corrections,” Hayford believed.

Hayford, 86 years old, “sees his private prayer life as the essential foundation of his ministry, and he deeply yearns to know and please God and live in radical dependence,” wrote biographer S. David Moore in Pastor Jack. “His journals are filled with prayers of confession, praise, and especially lament for his weaknesses and shortcomings. And yet almost always his journal entries end with grateful affirmation of God’s faithfulness to his promises. He is a devoted disciple of Jesus.”

“There is, in whatever one studies of Jesus, everything of humanity and nothing of superficiality; everything of godliness and nothing of religiosity,” wrote Hayford. “Jesus ministered the joy, life, health and glory of his Kingdom in the most practical, tasteful ways. There is nothing of the flawed habit of hollow holiness or pasted-on piety that characterizes much of the Christianity the world encounters.” 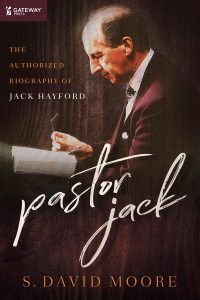 Authentic discipleship, to be “Spirit-formed” as Hayford calls it, involves nurturing an intimate relationship with God. In his relationship with Jesus, Hayford committed himself “to seek him daily (1) to lead and direct my path, (2) to teach and correct my thoughts and words, (3) to keep and protect my soul, and (4) to shape and perfect my life.”

Hayford’s love and concern for clergy of all traditions earned him the title of “pastor to pastors.” Despite coming from a relatively small classical Pentecostal denomination, his generous spirit had wide appeal.

“Jack lived in a God-charged, open universe that challenged the reductionism of the modern world,” wrote Moore. “At a time in which reality came to be defined in purely naturalistic terms, dismissing the supernatural as antiquated folklore, Jack Hayford’s life and ministry offered a recovery of the biblical world, a world in which God is active and present in his creation.”

Whether he was teaching before 40,000 clergy in a football stadium or hosting a dozen pastors in his living room, Hayford was honored, appreciated, and respected. “For pastors of all stripes, whether Pentecostals or evangelicals, Jack made the voice of God and the supernatural world of the Bible seem so normal. He carefully explained the way he heard God speak, as his mother had to him, in terms that modern minds could make sense of. He also gave permission to pastors to see the work of the Holy Spirit in enlivening the biblical text so that it spoke to the present in meaningful ways.”