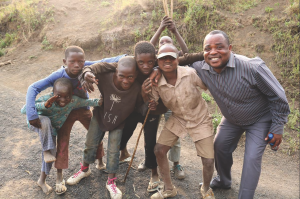 Zacky Kabunga, president of United Methodist Men in Goma, Congo, counsels a group of children who live on the streets in South Kivu. Photo by Philippe Kituka Lolonga, UM News.

There are nearly 3,000 children and youth living on the streets in South Kivu. The United Methodist Church in Congo is working to build relationships – through evangelism, counseling, and other support – to help some of them find a better path.

“Men of God are called to help these categories of people because it is part of the mission of the church,” said the Rev. Clement Kingombe, pastor of Ibanda United Methodist Church in Bukavu, who has been working with the youth for two years. Oftentimes, the young people gather around places that sell alcohol and they cause trouble in the streets, he said.

Mbilizi Bonane, president of United Methodist Women in Bukavu, said it has become a real problem. “There are street kids criss-crossing and bothering us from day to day. They smoke along the way and take strong alcoholic beverages,” she said.

Luc Lukwangomo, head of the Office of Child Protection in the Provincial Division of Social and Humanitarian Affairs in South Kivu, said there are many root causes for the increase in “street children.” Family poverty, divorce, drugs, a lack of education, and armed conflicts in villages are some of the factors that lead young people to live alone on the streets, he said.

Most of these children are runaways ranging in age from 12 to 16 years old, Lukwangomo said, noting that South Kivu alone has 2,976 children who are in difficult situations and find themselves at different sites in the city and its surroundings.

Bonane said United Methodist Women is helping assist the children with food and other needs. In August, the group provided food for nearly 30 street children living in Bukavu. “As a church, we organize locally with our congregations to begin to get closer to these children who sow terror in the city of Bukavu,” she said.

Kingombe said there are opportunities to bring the young people into the church and show them a better way to live. “We go to various places to meet these children in street situations. We sensitize them to participate in our activities of the church. The first way is to bring them the Word of God, and if they accept, we invite them in the church to pray with us. But, some of them refuse,” he said.

Bisimwa Janvier, 15, is grateful for the church’s support. “I thank The United Methodist Church very much for the spiritual, moral, and sometimes material support. This is a feeling of love for street children,” he said.

Zacky Kabunga, president of United Methodist Men in Goma, works with a group of street children each week and said there are others who are beginning to accept help from The United Methodist Church. “It’s hard work that requires patience and also the courage to work with these kids,” Kabunga said.

Janvier said the teachings of United Methodist pastors have led him to let go of his “old habits,” which included stealing from people. “Today, I’ve just made a commitment to educate other street kids to leave this behavior behind,” he said.

Shukuru Amos, 15, said thanks to Kingombe, who visited him regularly on the streets, he is now serving the church and singing in the choir. “I did not have a place to go, but today I live in the house of one the faithful of The (United) Methodist Church who accepted and welcomed us to his home,” he said. “Now, I’ll be willing to talk to other street children to join them to serve God.”

The Rev. Ibrahimu Sumaili, pastor of Kadutu United Methodist Church, hopes to raise awareness about the young people and their potential. “Our mission is to turn these children into disciples of God, so I commit myself each time to meet these children and talk with them,” he said.

The Rev. Ezekiel Mathe, a delegate representative for Bishop Gabriel Yemba Unda in the Kivu Conference, said it’s the church’s responsibility to lift up and encourage these young people to leave the streets and work toward a better future. “If no one is interested in them, if our eyes do not change with them, if we do not give them yet another chance to become like our children: educated, socialized, evangelized, and evolved in a healthy environment … we will prepare for a difficult future for the country and for the church,” he said.