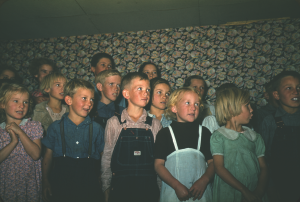 There’s a song. An old hymn called “Give Me Jesus.” The words are to the point: “You can have all this world. Give me Jesus.”

When I think of what I wish most for my children, it’s that they would understand the profound truth of that simple lyric. We’re a clergy family so there’s no shortage of religion in our life, nor should there be — don’t mistake me. We’ve taught our sons the revelation of God’s truth in scripture since they were infants. They know the liturgy. They know the hymns. They know the prayers. They also know there are significant parts of their lives in Christ that their father and I cannot manufacture for them. Intimacy with the Lord is something they must increasingly pursue themselves. The revelation of Christ himself is encountered through relationship and without it the Christian life is not complete.

Paul writes eloquently of the importance of surrendering ourselves, body and mind, to the influences of Heaven and leaving behind our old identity for our divinely designed identity in Christ. “So in Christ Jesus you are all children of God through faith, for all of you who were baptized into Christ have clothed yourselves with Christ” (Galatians 3:26). No one is more emblematic of this transformation than Paul himself. His encounter with Jesus, on the road to Damascus found him unable to recognize the very God whose word he dedicated himself to understanding and defending.

Academic proficiency is not enough to tell us who God is, or who God calls us to be. We need revelation from God to fully understand God’s will and our calling within his will. This is not to say we don’t need study. We do. My children are homeschooled in part so we can spend dedicated time to studying theology. It is within Paul’s well established framework of knowledge that Christ himself reveals to Paul the prophetic clues of his Messiahship. Paul’s studious nature and deep understanding of the Law are paramount to the success of his calling to evangelize the Gentiles of the Roman world. I want my children to know that not only can they be shaped and nourished by scripture, but that they can receive even deeper insight and wisdom from Christ himself.

Entering God’s presence, inevitably illuminates our brokenness. Psalm 24 asks, “Who may ascend the mountain of the Lord? Who may stand in his holy place?” We may be tempted to think it isn’t right to seek God’s presence, or that, the occasional touch from the Holy Spirit is enough, that we shouldn’t be too greedy for him.

To that I say: “Have you ever been in his presence?”

Years ago at my husband’s first appointment there was a woman in the local nursing home who was no longer verbal except for one phrase: “Into the Garden!” She would yell. Lord help me; I’m not a fan of that hymn, but we sang it for her every time we visited. As we’d come to the refrain she’d close her eyes and cry:

“And He walks with me, and He talks with me / And He tells me I am His own/ And the joy we share as we tarry there/ None other has ever known.”

Through the new covenant of Christ’s blood we are given grace by the confession of our faith. We are adopted children of the promise. We belong to the Father, we bear his name and authority. We are forgiven and cleansed. We are new creations who may approach the throne of God with boldness. That is our identity in Christ. If we seek his presence, we’ll know that he calls us his own. I want my children to know they can encounter Christ himself and discover their greatest purpose in him, and the measure of God’s love and the possibility of their calling is not defined by their past sins.

Christians are sometimes wary of expressions of Christianity that emphasize experience and encounter over the word. Fair enough, caution may be advisable in those instances. We can’t understand God apart from scripture and most of us raised in the church began our relationship with God through the word. However, scripture itself suggests that habitual meditation on the word renews our minds not only in our ability to distinguish the lawful from the unlawful, but also the supernaturally sacred from the supernaturally profane.

Presumably this is because the writers of scripture correctly understood the world we inhabit is indeed a world of both natural and supernatural phenomena. When we reject biblical accounts of divine healing, the existence of demons, raising the dead, angelic visitations, or post resurrection appearances of Christ, as either primitive interpretations of naturally explainable events or, as no longer theologically viable in today’s church, we impugn principle objectives of Christ’s very coming. We render ourselves defenseless against the ceaseless waves of narcissistic spiritualism proliferated by culture. And absent the power of God, we arm our children with nothing better than philosophical moralism. As a church family we must press for more, so much more.

The world offers encounters and experiences every day that promise to satisfy the ache that comes with having eternity written in our hearts. St. Augustine names every human’s soul sickness when he says “Thou hast made us for thyself, O Lord, and our heart is restless until it finds its rest in thee.”

I want my children, I want all of our children, to meet the Lord. I want them have a revelation of their imperishable, undefiled, unfading inheritance in Heaven, today. I want them to know there is divine love that the world cannot hope to compete with.

Maggie Ulmer is one of the hosts of the Plain Truth: A Holy Spirited Podcast. She holds a degree in Classical French Cuisine from PA Culinary Institute, is the co-founder of a professional theatre company called The Hub Theatre, and is married to a United Methodist pastor.