What the Bishops Really Did 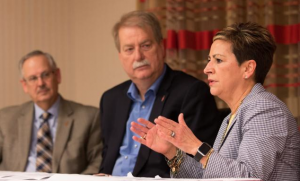 Since the Council of Bishops finished their decision-making process on May 4 outlining their proposal for a Way Forward for the church, there has been much confusion. Part of the confusion stems from the careful language used by the bishops in their press release explaining their action. Part of the confusion results from the varying statements and interpretations that individual bishops have released to their annual conferences.

Based on conversations with a number of bishops, I believe that I can answer the most prominent questions that have been asked about what to expect from the bishops’ report and proposal. (Note that this is my interpretation of what I heard and is not in any sense “official” from the bishops.)

What exactly will be in the Council of Bishops’ report and proposal?

As the motion reported in the press release stated, the COB report will contain a recommendation that the General Conference adopt a One Church Plan as proposed by the Commission on a Way Forward. That recommendation will include petitions to change the Book Discipline to remove all language prohibiting same-sex weddings and the ordination of self-avowed practicing homosexuals. It will also add language protecting those who want to maintain the current understanding of human sexuality and want to continue acting within that understanding.

In addition to the recommendation and proposal for the One Church Plan, the report going to General Conference will also contain a “historical narrative” that will explain the Council’s reasons for their proposal. That material will also contain the two other plans proposed by the Commission on a Way Forward, a Connectional Conference Plan and a Traditionalist Plan. The Connectional Conference Plan would create three theological jurisdictions (one traditionalist, one progressive, and one uniting) that would each operate under different understandings about marriage and sexuality while sharing a common core of doctrine and mission. The Traditionalist Plan would retain the current stance of the church prohibiting same-sex weddings and self-avowed practicing homosexual clergy, enhance accountability to these standards to create uniform enforcement across the church, and provide a gracious exit for those who are unable or unwilling to live within the current boundaries of the Discipline.

Will the two plans not recommended by the bishops include possible legislative changes related to those plans?

The Connectional Conference Plan has been fully developed and contains all the legislation (including constitutional amendments) that would be required to implement that plan. That legislation will be part of the historical narrative and background material in the report. That legislation could be put forward by General Conference delegates as a substitute for the One Church Plan on the conference floor in St. Louis.

Will there be a “gracious exit” path available for churches and clergy who cannot live with whatever plan is passed by General Conference?

The bishops decided that their mandate was to provide for the unity of the church, not to encourage the departure of congregations and clergy. Therefore, an exit path will not be part of their One Church proposal. However, at least one form of exit path legislation will be included in the supplemental material, and it could be added by the General Conference delegates to any of the plans. Other exit path proposals could be submitted as part of the regular petition process, if permitted by the Judicial Council, or else submitted independently. The delegates could add any of these exit path proposals to any of the plans.

Why will the COB report and proposal not be released until early July?

There are several reasons why it will take until July to release the final report and proposal.

In an earlier statement, I called the delay of the release of the bishops’ proposal “unacceptable.” I understand and support most of the reasons the bishops have given for the report’s delay. However, the management of this whole process left a bit to be desired. If more developed plans had been given to the bishops earlier, perhaps they would have given their feedback earlier. At the same time, if the bishops had shared their feedback earlier about the need to develop a Traditionalist Plan instead of waiting until a week before the Commission’s last meeting, the Commission could have done more work to develop such a plan.

I think the COB was hoping that the report they received at their meeting ending May 4 would be complete and need only minor cosmetic changes. It could have been sent for translation quickly and would have been finished well before the July 8 deadline. The dramatic (and helpful) decision of the COB to include a Traditionalist Plan at the last minute threw off those plans and leaves us in the situation we now find ourselves.

Did the bishops really “overwhelmingly” recommend the One Church Plan?

No. The “overwhelming majority” vote in support of the bishops’ report was based on the inclusion of all three plans. Note that even then, the vote of support was not unanimous. A clear majority supported the One Church Plan, but according to one bishop it was less than a two-thirds majority. There was significant support among the bishops for both of the other two plans.

It is important to note that the bishops do not decide what the church will adopt as its way forward. (Many of them probably wish they were able to decide that.) Instead, it is the delegates to General Conference, representing all of our global church, who will decide our way forward. They will not be limited to voting only on a One Church Plan, but can consider all three options sketched out by the Commission and perhaps other plans as well, submitted by others. The gestation period is beginning, and nine months from now, we will see what the General Conference brings forth to help our church resolve its conflict and refocus on our primary mission of making disciples of Jesus Christ for the transformation of the world. Please pray for the delegates, as they bear this significant responsibility.

Thomas Lambrecht is a United Methodist clergyperson and the vice president of Good News.  He is also a member of the Commission on a Way Forward.