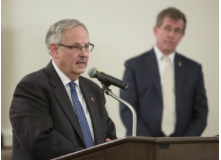 The bishops have been asked to lead. Apparently, to some bishops that means strong-arming a progressive agenda that has already been rejected by a previous General Conference.

In its recent gathering, the Council of Bishops – behind closed doors – affirmed by a clear majority that it will recommend the One Church Plan to the 2019 General Conference. This plan changes the definition of marriage to “two adults” and removes all prohibitions against same-sex weddings and the ordination of “self-avowed practicing homosexuals.” It also contains allowances and conscience protections for those who want to continue to live by the current biblical standards of the Book of Discipline.

We are grateful that there is a contingent of bishops who do respect the traditional view of marriage and sexuality and who recognize the truly global nature of the United Methodist Church. We regret that they – even including those bishops from outside the United States – are in the minority.

The North American contingent of the Council of Bishops has put forward a proposal that is riddled with problems, and we will be examining it in more detail in the months to come. But I want to point out the direction that many bishops have taken to promote the One Church Plan as the only viable option for the church.

First, the majority of North American bishops have approved a plan that they knew evangelicals and traditionalists could not support. Good News, the Confessing Movement, and the Wesleyan Covenant Association have all made public statements that any type of “local option” plan is unacceptable to us. Over 1,800 attendees at the Chicago inaugural event of the WCA affirmed that “A plan that requires traditionalists to compromise their principles and understanding of Scripture, including any form of the ‘local option’ around ordination and marriage, will not be acceptable to the members of the Wesleyan Covenant Association, stands little chance of passing General Conference, would not definitively resolve our conflict, and would, in fact, lead to the fracturing of the church.”

Yet the majority of these bishops adopted the plan anyway.

Second, from the beginning of its work, the Commission on a Way Forward stated that a “gracious exit” for churches with their property would be part of any plan they put forward. The Commission recognized that the denomination is so polarized that no proposal is likely to be acceptable to all. Rather than spend millions of church offering dollars fighting over the buildings and property (like other mainline churches have done), the Commission believed that it should provide churches and clergy that could not continue in The United Methodist Church after the decision of the 2019 General Conference with a gracious way to exit with their property and pension.

Yet the majority of the Council of Bishops has inexcusably removed the gracious exit from its One Church Plan. Apparently, some progressive bishops believe that they can coerce United Methodist members to stay in the church by holding their church buildings hostage to the denomination. Some annual conferences are starting to use hardball tactics to punish congregations that want to leave. (More about that in a future blog.)

Bishop Scott Jones, who submitted his own opposing brief and also participated in oral arguments before the Judicial Council, charged that Bishop Ough was misrepresenting himself. “The Council of Bishops has at no time discussed a recommended answer to the question posed to the Judicial Council nor taken a position authorizing any one or all of its officers to represent it in any particular way,” Jones wrote in his reply brief. “He is misrepresenting the Council which has never taken that position and never discussed how the question should be answered.”

Yet the powers that be on the Council of Bishops felt free to try to restrict the access of grassroots United Methodists in the pews to be able to contribute to a solution to the way forward for our church. I am hopeful that the Judicial Council will rule that other petitions are allowed as part of the official process.

It is the role of leaders to identify a vision or direction and advocate for it. But closing off other options and restricting the choices that followers can make is not leadership, but dictatorship. When bishops advocate for the One Church Plan as the only possible solution to our church’s conflict (despite the fact that a significant number of bishops opposes that plan) they are going beyond what healthy leadership involves. Controlling and manipulating the outcome is not healthy leadership.

Those bishops taking this approach are exhibiting contempt for their evangelical members and clergy – as well as disrespecting their non-North American colleagues who do not share their progressive vision. They are promoting a plan that we have said we cannot accept. They are advocating for the exclusion of other options or choices for the 2019 General Conference. And they are attempting to coerce churches to stay in the denomination in violation of our consciences (should the One Church Plan pass) or else be prepared to lose our property.

The Commission on a Way Forward and the Council of Bishops are advocating that we adopt a “heart of peace” in working together to resolve the impasse that divides and stifles the vitality of our church. But the bishops must lead with a heart of peace in their actions, not just in their words. Disrespect and contempt are attitudes that destroy relationship and increase mistrust. The recent string of decisions by a majority of the Council of Bishops betrays not a respectful attempt to work together to resolve our differences, but an attempt to dictate a solution and force everyone to accept it. Such an approach is more likely to provoke a “heart of war” and set up the 2019 General Conference as a contentious conflict zone. So far, the “heart of peace” seem to be just empty words.

Thomas Lambrecht is a United Methodist clergyperson and the vice president of Good News. He is also a member of the Commission on a Way Forward.