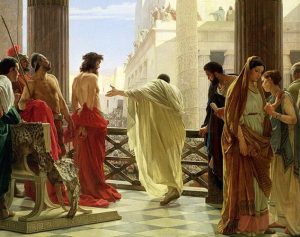 “What is truth?” Pontius Pilate asked that compelling question during his interrogation of Jesus prior to condemning him to the cross (John 18:38). For Pilate, that question was a cry of despair — he had given up on ever finding the answer.

It appears that many Americans, including many American Christians, also despair of ever finding truth. A recent survey conducted by the Cultural Research Center at Arizona Christian University under the direction of Dr. George Barna found that a majority of Americans no longer subscribe to a historic understanding of what “truth” is.

The survey found that 58 percent of Americans agreed that “Identifying moral truth is up to each individual; there are no moral absolutes that apply to every person, all the time.”

Let that sink in a moment. Nearly six out of ten Americans think they can make up their own moral truth. That means the Ten Commandments (honor your father and mother, do not lie, do not steal, do not murder, do not commit adultery) are merely suggestions. That means that some people might be perfectly entitled to believe that theft, murder, rape, or racism is acceptable, according to their own personal truth.

According to the survey, the only group in society that did not have a majority holding this opinion was evangelical, born-again Christians. Yet a strong minority (46-48 percent) of these Christians agreed with the “personal truth” idea. Somewhat encouragingly, only 33 percent of committed Christian leaders agreed that there is no absolute moral truth.

When asked, “What is the basis of truth,” the most common answer was God. Yet only 42 percent of Americans referenced God as the basis of truth. Another 16 percent found truth in “inner certainty,” while 15 percent look to “scientific proof.” (One wonders how science could ever be a determining factor for moral truth. What scientific study could prove that lying or adultery or racism is morally wrong?) Smaller percentages rely on tradition (5 percent) or public consensus (4 percent) to determine moral truth.

Adults under age 30 were less likely to select God as the basis of truth – 31 percent, compared to 45 percent among older adults. Southern states gave God slightly more recognition (48 percent), compared to an average of 38 percent for other regions of the country.

The idea that there is no absolute truth is part of the philosophy known as post-modernism. Based on the survey results, it appears that a strong majority of Americans operate out of a post-modern mindset.

This highly individual approach makes agreement about anything much more difficult. Since there is no one agreed-upon standard for moral truth, we hold nothing in common, to which we can all appeal to settle disputes. I might point to a biblical teaching or to a particular secular law, but you could come back with, “That is your truth, but I don’t accept it as my truth.” The argument is at a stalemate. There is no way to resolve it. This is a contributing factor to the gridlock and endless conflict in our society and government today.

Just from a rational perspective, post-modernism gives us no basis upon which to critique another person’s moral beliefs or actions, since everyone has their own, self-made moral framework. It all boils down to self-interest. Something is wrong if it hurts me. But there is no objective standard by which society can judge what you did to be wrong. What a mess!

A Christian Understanding of Truth

Fortunately, Christians do have a moral framework that applies in all times and places, based on the reality of God and his teachings found in Scripture.

Jesus said, “I am the way and the truth and the life” (John 14:6). “The Word became flesh and made his dwelling among us. We have seen his glory, the glory of the One and Only, who came from the Father, full of grace and truth” and “the law was given through Moses; grace and truth came through Jesus Christ” (John 1:14, 17). Jesus said, “If you hold to my teaching, you are really my disciples. Then you will know the truth, and the truth will set you free” (John 8:31-32). The Holy Spirit is called the “Spirit of truth” (John 16:13).

We are not only called to know the truth, but to live by the truth. “But whoever lives by the truth comes into the light, so that it may be seen plainly that what he has done has been done through God” (John 3:21). “Yet a time is coming and has now come when the true worshipers will worship the Father in spirit and truth, for they are the kind of worshipers the Father seeks. God is spirit, and his worshipers must worship in spirit and truth” (John 4:23-24). Jesus prayed for us, “Sanctify them by the truth; your word is truth” (John 17:17).

The psalmist prays, “Show me your ways, O Lord, teach me your paths; guide me in your truth and teach me, for you are God my Savior, and my hope is in you all day long” (Psalm 25:4-5). “Test me, O Lord, and try me, examine my heart and my mind; for your love is ever before me, and I walk continually in your truth” (Psalm 26:2-3). “‘These are the things you are to do: Speak the truth to each other and render true and sound judgement in your courts; do not plot evil against your neighbor, and do not love to swear falsely. I hate all this,’ declares the Lord” (Zechariah 8:16-17).

One of the signs of Israel’s downfall was its abandonment of truth. “So justice is driven back, and righteousness stands at a distance; truth has stumbled in the streets, honesty cannot enter. Truth is nowhere to be found, and whoever shuns evil becomes a prey” (Isaiah 59:14-15). “Go up and down the streets of Jerusalem, look around and consider, search through her squares. If you can find but one person who deals honestly and seeks the truth, I will forgive this city'” (Jeremiah 5:1).

God promises truth as one of the blessings of his presence. “This is what the Lord says: ‘I will return to Zion and dwell in Jerusalem. Then Jerusalem will be called the City of Truth'” (Zechariah 8:3).

We can try to ignore the truth, but that is like ignoring gravity — gravity (and truth) wins every time! We can pretend to make up our own moral truth, but that puts us in the place of God. Are we really prepared and equipped to be God, even just for our own lives? Trying to be our own god is the height of human hubris. When God sees us try to usurp his place, he laughs (sarcastically). It must be incredibly sad for God to see us puny creatures attempt the impossible and in the process ruin our lives and our world.

That is why God spoke the truth through his Word and sent Jesus, the living truth, into his world to teach us the truth. It is only through God’s truth being actualized in our lives that we can be the person God created us to be. Surrendering to his truth is the only way out of the darkness and into the light, the only way to true freedom.