We Don’t Actually Believe All That 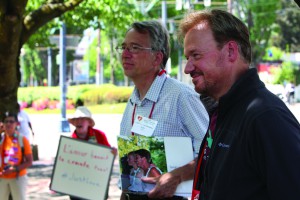 The Rev. Mike Tupper (left) and the Rev. Frank Schaefer during a May 13 press conference. Photo by Kathleen Barry, UMNS.

“How effectively can a church retain the lukewarm or uncertain if it keeps its most controversial teachings while constantly winking to say, ‘Don’t worry, we don’t actually believe all that?’”

Although New York Times columnists Ross Douthat wrote the above about the Roman Catholic Church, recent cases involving three United Methodist Church pastors and one of its bishops aptly illustrates its applicability to our denomination as well.

It’s no secret that the UM Church forbids its ministers to preside at same-sex services and does not ordain or continue in ministry openly gay clergy who are self-avowed and practicing. Both are serious offenses that could lead to the loss of one’s ministerial credentials. But evidently not in the cases of the Revs. Anna Blaedel, Valerie Rosenquist, Mike Tupper, and retired Bishop Melvin Talbert.

At the Iowa Annual Conference this past June, Blaedel requested a point of personal privilege so she could announce at a plenary session, “I am a self-avowed practicing homosexual…. I am out, queer, partnered, clergy.” A complaint was immediately filed against her, but on August 30, as one of his last acts as the conference’s presiding bishop, Julius Trimble, dismissed the complaint without comment. Blaedel continues to serve in her appointment at the Wesley Center on the campus of the University of Iowa.

Tupper, a pastor in the West Michigan Annual Conference, presided at his daughter’s same-sex wedding in 2014. He subsequently reached a “just resolution” in the case, which allowed him to keep his ministerial credentials. However, he officiated at another same-sex wedding in 2015. Offered another penalty-free settlement, he refused it and instead embarked on a nationwide tour demanding a church trial, believing it would draw greater attention to the LGBTQ+ cause.

His bishop at the time, the recently retired Deborah Kiesey, mooted his requests for months, hoping to run out the clock on her tenure and his. This September, the recently retired Tupper finally accepted he would get no public church trial, so he agreed to his second penalty-free “just resolution.”

Earlier this year, Rosenquist and Talbert co-officiated at a same-sex union in the Western North Carolina Annual Conference. Complaints were filed against Rosenquist, but in the final days of service before his retirement, Bishop Larry Goodpaster announced that a “just resolution” had been reached in Rosenquist’s case. While the terms of the resolution were not shared, it is clear she has avoided a church trial, retained her ministerial credentials, and is being continued in her clergy appointment.

Of course, some LGBTQ+ advocates will applaud their actions, even if they’re done in a Nicodemus kind of way. Still other United Methodists shrug their shoulders, and ask, “What’s the harm? Who cares what a bishop and a few pastors do in Iowa, North Carolina, and Michigan? Can’t we all just get along? Isn’t unity more important than our differences over our sexual ethics and same-sex marriage?”

For people who ask these questions, the answers are easy. There is no real harm. It doesn’t trouble them, so it shouldn’t trouble anyone else. And yes, they do believe unity is a greater good than the church’s sexual ethics and its teachings on marriage. They are of course entitled to their opinions, and to advocating for changes in the Discipline.

But we would argue to the contrary. The harm done is serious and substantive. In a connectional church, people are right to care about what happens in Iowa, North Carolina, and Michigan. And no, “unity” does not trump the church’s sexual ethics and its teachings on marriage.

So when bishops, whether quietly or flamboyantly, undermine these teachings they undermine their own authority, harm the work of colleagues and mock the beliefs and values of the people they are entrusted to care for and lead.

And this is particularly egregious when it is done in less than candid ways. For instance, back in 2014, Bishop Elaine J. W. Stanovsky reached a toothless settlement that supposedly resolved Bishop Talbert’s very public presiding at a same-sex wedding in October 2013. She released word of the settlement on December 30, nearly 15 months after the infraction. The announcement date was clearly chosen to bury it in the long holiday week between Christmas and New Year. It was analogous to politicians who release bad news on a Friday night after 9 pm. It lacked candor and courage. Why do in the dark what you believe to be just and right?

The best that might be said for Trimble and Goodpaster, the retiring bishops involved in two of the cases cited above, is that they were trying to dispose of delicate situations as of way helping their successors. However, reaching a just resolution that appears to involve no serious consequences, and dismissing a legitimate complaint during one’s last days in office demonstrates tone deafness at best, and a lack of leadership at worst.

The cases these bishops handled involved pastors who clearly wanted, in very public ways, to challenge the teachings of The United Methodist Church. Given the public nature of Rev. Rosenquist’s actions, Bishop Goodpaster should have insisted that no just resolution could be agreed to without all parties consenting to a public release of the resolution. And Bishop Trimble should have openly shared his reasons for dismissing what appeared to many Iowan United Methodists as a legitimate complaint against a pastor who openly announced, “I am a self-avowed practicing homosexual…. I am out, queer, partnered, clergy.”

By failing to deal openly and candidly, Bishops Goodpaster and Trimble, as well as Stanovsky and Kiesey, have deepened the already low level of distrust rank-and-file United Methodists have for their episcopal leaders. Their actions give the appearance of condescending to their flocks rather than showing them respect. They appear to lack either the time or courage to gamely defend decisions that justifiably appear dubious to many.

It was widely noted – well before the 2016 General Conference, before all the ecclesial defiance at annual and jurisdictional conferences, and before the election of an openly gay bishop – that UM worship attendance in 2014 in the U.S. fell by 2.6 percent. It would be unfair and misguided to suggest this dramatic drop is all due to the church’s long debate over the practice of homosexuality. But the debate, the open acts of defiance, and the dubious dismissal of complaints and “just resolutions” are surely accelerating the plunge.

Now might be a good time for bishops to regularly see monthly or even weekly attendance records so they have some sense of what kind of damage is being done in terms of attendance and giving to the church. This is not to suggest bishops run the church like a business, shifting course according to the preferences of consumers. But it is to suggest that we need to know where we stand, and where we might be headed. Clergy families, people who work at our boards and agencies, young seminarians accumulating debt, and local church boards trying to decide whether to embark on a capital campaign (the list goes on) should have some concrete information about where the church is headed. And they should know sooner than later.

It is not scare mongering to suggest the church is in crisis. And yet despite the crisis, no one expects our bishops to get every detail right. In truth, United Methodists are looking for leadership and are willing to be led. However, they rightfully expect that their values will be honored and fairly considered. They also rightfully expect their leaders to act with integrity and courage, and therefore to candidly and forthrightly explain themselves when they make controversial decisions.

Winking and nodding might be a clever political play, but it’s not leadership.

Walter Fenton is a United Methodist clergyperson and an analyst for Good News.