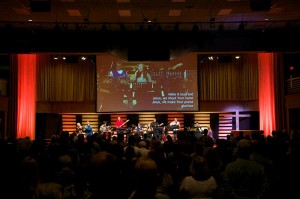 The senior pastors at both churches explained that their congregations are now in a process of discernment with the annual conference regarding their departures. Getwell Road UM Church, a vibrant and growing suburban congregation in the greater Memphis, Tennessee, area, averages over 800 people in worship. And The Orchard is the 15th largest United Methodist church in the U. S. in terms of worship attendance. On average, over 2,700 people attend its weekend services.

“We want our departure to be as peaceful and God honoring as possible,” said the Rev. Bryan Collier of The Orchard. “We will be in conversation with Bishop James Swanson about the details and timing of this process. We want to act honorably and peacefully.”

Bishop Swanson, the resident bishop of the Mississippi Episcopal Area released a statement on Monday afternoon informing the conference of the news. He reported that he and two district superintendents are engaging in a discernment process with the pastors and their congregations.

“Our staff and lay leadership have had conversations about this move for some time; it’s not something we rushed into,” said the Rev. Bill Beavers of Getwell Road UM Church. “This past October we invited the whole congregation to engage in conversation and prayer over the possibility. Several serious months of discernment preceded our congregational vote.”

Both pastors cited their congregations’ frustration with the denomination’s long and acrimonious debate over the church’s sexual ethics and teachings on marriage. Going forward, they said their congregations want to focus on kingdom matters so they are removing themselves from unproductive battles that distract them from their larger missions.

Collier cited the Judicial Council’s (essentially the denomination’s “Supreme Court”) impending decision regarding the validity of the Western Jurisdiction’s July election of the Rev. Karen Oliveto as the denomination’s first openly gay bishop. This April the Council is expected to answer several questions of law pertaining to her election.

“Either way, the Council’s decision is just going to prolong a bitter and divisive debate,” Collier said. “We don’t want to be part of the argument anymore.

We have more important things we need to do in the Tupelo community and well beyond it.”

Neither pastor nor Bishop Swanson offered a hard timeline regarding the discernment process they have agreed to enter into. Swanson asked for prayers for all concerned.

“I want to do my best to take care of and do right by Getwell Road,” said Beavers. “Our entire leadership team wants to be proactive, rather than reactive. We will continue to be in prayer and in a time of discernment as we work with Bishop Swanson.”

Other sources have reported that additional local UM churches in the Mississippi Annual Conference are contemplating similar actions in March or late April after the Judicial Council answers the questions of law pertaining to Bishop Oliveto.