The Rise of Theological Liberalism and the Decline of American Methodism 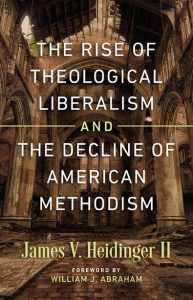 As The United Methodist Church prepares for an unprecedented called General Conference in 2019, Seedbed Publishing recently released an important book to help us understand the deeper theological debates that have led to our present impasse. The Rev. Dr. James Heidinger’s The Rise of Theological Liberalism and the Decline of American Methodism is a masterful history of the subject.

For 26 years Heidinger was the president of Good News. During that time he wrote hundreds of editorials, several books, and spoke at least once in nearly every annual conference in the U.S.

Jim has always been known for his irenic spirit, his commitment to dialogue, and his passion for a church fully committed to Scriptural Christianity.

In The Rise of Theological Liberalism, Jim demonstrates what so many of us have always known about him. He carefully does his research and then, without rancor, tells the story in a fair and clear manner.

We admit we are a bit biased when it comes to Jim’s writings. So don’t just take our word for it, here is an excerpt from the foreword to Jim’s new book. ­
-Good News 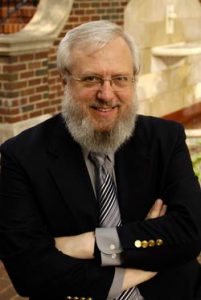 This book constitutes a pivotal intervention in the current debates about the nature and future of United Methodism. It should be read and pondered across the denomination. It will be seen by historians as an invaluable source for understanding what has happened over the last generation.

James Heidinger II has been a quiet but extremely influential figure in the recent history of United Methodism. He makes no pretension of being an academic historian. However, this is one reason why this work is so important. He has been deeply involved in the life of the church as an agent who has sought to renew United Methodism across a lifetime of ministry and service. It is not a role that anyone in his position can relish because it entails being a lightning rod for all sorts of fantasies and anxieties about the church. However, he has borne years of criticism with incredible dignity and fortitude, plugging away as a master of ceremonies in both high and low places. The result is a personal take on what has happened from an agent of change and hope. He has operated from the trenches and his analysis must be taken seriously precisely because his observations represent a crucial but neglected stream within United Methodism as a whole. We cannot understand where we have come from or where we are headed without this clearheaded and gracious testimony.

I find it astonishing that so few have devoted attention to providing serious historical narrative of Methodism in the United States across the last generation. Maybe we are still too close to events to venture forth. Maybe the truth about our recent past is too painful to record openly. Maybe we are too confused to know how to orient our narratives. Whatever the case, we have here a hang glider account that provides grist for all future historical mills that may operate. No doubt in time there will be other narratives; however, this narrative must be given a privileged place in the resources that are available. We have here an insider’s account of the first importance. 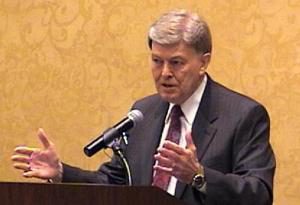 Heidinger’s passion has long been the scriptural and doctrinal reinvigoration of United Methodism. He has, to be sure, also been heavily involved as a key leader of the Good News movement in the ecclesial events of the last half-century. Because of this latter identity it is easy to dismiss his work as that of a political operator. I recently heard of one leading bishop who dismissed the evangelical and orthodox wing of United Methodism as an incarnation of Machiavelli. I doubt if he knows anything of substance about Machiavelli and the recent scholarly revision of his work….

Heidinger has wisely decided to focus on a theological reading of the recent past and how that effects the decline that everyone readily recognizes. The content is decidedly his own. Other evangelicals may want to draw up a different bill of particulars. They may balk at the sharp disjunction between liberal and conservative in play here. However, the great virtue of the approach adopted is that it is clear and substantial. Other narratives will have to reckon with this one if we are to make progress in understanding and action. In fact, this is no mere propaganda piece in favor of Good News and other Renewal movements in the neighborhood. Heidinger has his own searching critique of his own tribe and team. Even so, he has never been a jeremiad; he has been resilient in working for civil dialogue and constructive change.

It is patently clear that we now stand at a crossroads as far as the future of United Methodism is concerned. Folk are moving beyond anxiety toward the development of what Professor David Watson has aptly called “the Next Methodism.” Rest assured there will be a next Methodism and it will have a stormy relationship with the United Methodism put together by a complex hero of many evangelicals, Albert Cook Outler, of blessed memory. Outler shifted his ground in later years, although few know the details as yet. He had a stormy relationship with evangelicals, as he did with everyone. I would dearly love to get his take on where we are. Whatever he might be thinking on the other side, we are headed for a new day. It would be great to sit in on a seminar with Outler and Wesley and other great heroes and heroines of our tradition. The workers die but the work goes on, as Wesley once noted. There are eighty-two million descendants of John Wesley across the globe so Methodism is not going to disappear any day soon. The big question is what place United Methodism will have in that future. This book is a must-read for those pondering that question.

This excerpt is taken from Dr. Abraham’s Forward to The Rise of Theological Liberalism and The Decline of American Methodism by James V. Heidinger II (Seedbed, 2017). Heidinger is president emeritus of Good News. This excerpt is reprinted by permission of Seedbed.com. To purchase Heidinger’s book click HERE.