The Plans’ Impact on Clergy 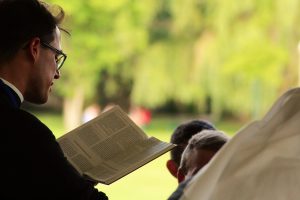 As the special called General Conference in St. Louis is less than two weeks away, it is understandable that one group of people is experiencing perhaps the most anxiety –clergy. Clergy are on the front lines of ministry in local churches. They have to deal with conflicting opinions in their congregations, as well as criticism from members for the denomination. While guaranteed an appointment, clergy see the declining congregations around them that diminish future appointment options and call into question their job security. In some ways, clergy may have the most to lose if the General Conference is not able to find a constructive way for the church to move forward.

In the midst of this anxiety, what are the implications and possible consequences of adopting one or another of the various plans General Conference is considering?

Clergy and the One Church Plan (OCP)

In one sense, adoption of the OCP would set clergy free. They could make their own choice regarding same-sex weddings without any denominational restrictions. Those who felt strongly about the need to do such weddings could proceed without fear of formal complaints and a trial. Those who oppose doing same-sex weddings could continue to follow their conscientious beliefs. Openly gay or lesbian persons could be ordained in at least some annual conferences.

The downside of this freedom is that local congregations would also gain the right to make decisions that until now have been made at the general church level. If a congregation wanted to host same-sex weddings, it could vote to do so at a church conference. Congregations opposed to hosting could also adopt a policy statement at their church conference. This means that many local churches will experience another arena of conflict that the pastor will need to manage and help them navigate. In a congregation of mixed opinions and strong feelings, such conflict could pose a threat to the church’s vitality or even continued existence.

Many evangelical clergy by conscience could not continue to serve in a denomination that they believe has contradicted Scripture by approving same-sex marriage and the ordination of self-avowed practicing homosexuals. For them, the need to leave the denomination would lift anxiety to a completely new level. Will their local congregation also seek to leave? Will there be a place of ministry outside the UM Church? Will they find a place that matches their gifts and graces, as well as meeting the needs of their family? Despite the uncertainties, many evangelical clergy will stand on conviction and choose to withdraw.

For clergy of all stripes who stay, they will have to contend with a dramatically decreasing denomination. Every other denomination that adopted a OCP-type plan has experienced at least a doubling of its rate of decline. In The United Methodist Church, worship attendance is falling at the rate of 3 percent per year in the U.S. Doubling that to 6 percent per year would have a devastating impact on local churches and annual conferences, both financially and programmatically. The clergy who stay will have to deal with the fallout of such a decline. In many annual conferences, clergy morale is already low. This increased decline is bound to decrease morale even further.

Availability of appointments for clergy could become more quickly restricted, as congregations decline to the point that they can no longer afford a full-time pastor or even an ordained pastor. This trend is ongoing now, but could dramatically worsen if the denominational decline gets worse. In addition, since clergy tend to be more liberal in theology (in general) than congregations, there may be a shortage of churches willing to have a pastor who wants to do same-sex weddings. This plan relies on the bishop and cabinet to take into consideration the needs of both congregation and clergy, which might be more difficult to do as options for appointment become more limited.

The CCP was designed to move into a new church structure with the least possible disruption. Clergy would need to determine which connectional conference they want to serve in, but could continue to serve their current appointment on an interim basis until an appointment opens up in their preferred conference. In addition, clergy could make themselves available to serve in a different connectional conference, as long as they were willing to abide by its requirements. This would most likely be seen in progressive clergy serving in a “unity” (or local option) conference.

Adoption of the CCP could bring about the challenge of dealing with the guaranteed appointment for conferences that have more clergy than congregations. This would be somewhat alleviated by the ability to serve in a different connectional conference. There may also be evangelical clergy who find the need to withdraw because even being in the same denomination with those who affirm practices the Bible calls sinful would be untenable, leading to the issues around leaving mentioned above.

For clergy who are willing to abide by the current requirements of the Book of Discipline, there would be little change. Clergy who wanted to continue living by our current teachings but happen to be in an annual conference that votes to withdraw from the UM Church would be able to remain in the UM Church. They could either serve their existing congregation, if it decided to also remain United Methodist, or receive another appointment to a church in the new annual conference formed in the area covered by the withdrawing conference.

It is possible there would be more progressive clergy than congregations, in which case there may be a shortage of appointments for clergy wanting to perform same-sex weddings. Such clergy could remain United Methodist as long as they were willing to abide by our Disciplinary requirements.Clergy who want to perform same-sex weddings or be part of a church that ordains self-avowed practicing homosexuals could withdraw from the UM Church. They could either serve their existing congregation, if it decided to also withdraw, or receive an appointment in a congregation in a newly formed self-governing (progressive) Methodist church. If they were in an annual conference that withdraws from the UM Church, they would simply remain in that annual conference.

The most vulnerable clergy are local pastors, who are licensed but not ordained — and have no security of appointment. Local pastors who are more evangelical in theology would find a ready welcome in the UM Church under the Modified Traditional Plan. There would also be a ready welcome in any new denomination formed by evangelicals leaving the denomination under the One Church Plan. In both scenarios, there could be a shortage of evangelical clergy, and there would be an emphasis on planting new churches, which would also increase the need for clergy.

Many rumors are flying around about the impact of the plans on clergy pensions. The Commission on a Way Forward worked with Wespath (Board of Pensions) to minimize any effects on clergy pensions. Regardless of which plan is passed at General Conference, Wespath is recommending two changes to the pension program.

Every effort has been made by the Commission and proponents of the various plans, regardless of theological perspective, to ensure the continued viability of the pension program for all clergy and to minimize any pension impact of a particular plan. The language used in the MTP and in some of the exit paths concerning pensions was supplied by Wespath and vetted by them. Those wanting additional information about the impact on pensions can visit the Wespath FAQ page.