The Joy of Providing Food 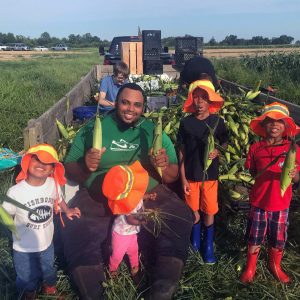 Former NFL center Jason Brown with his children (from left) Judah, Jason, Olivia, Noah, and Tre. First Fruits Farm, Browns’ farm in Louisburg, N.C., donates a portion of its harvest to the Society of St. Andrew. Photo courtesy of the Browns.

Potatoes connect former NFL player Jason Brown and part-time nurse and mother-of-four Lindsey Whitley, though they don’t know each other. Whitley’s home in Indian Trail, North Carolina, is about 200 miles from Brown’s farm in Louisburg. Potatoes from Brown’s 1,000-acre North Carolina property end up as potato soup on the Whitley dinner table through the work of the Society of St. Andrew. The Virginia-based non-profit works to share healthy food and reduce food waste.

The food chain in the U.S. has built-in waste, said the Rev. Michael Binger, a United Methodist and North Carolina regional director for the Society of St. Andrew. Farmers routinely enter into contracts to provide less food than they usually grow, in order to guard against weather and other factors that might result in smaller harvests than expected, Binger said. They try to sell the excess. If they can’t, the Society of St. Andrew seeks the donation of the crops that would otherwise be headed for landfills as garbage.

“Nationwide we do about 30 million pounds of produce a year,” Binger said. Most of the food is distributed in the southeastern U.S. Foundation grants and donations from churches and individuals fund the organization.

“The great thing about what we do, it’s tangible,” Binger said. “You can see the truck coming to the church parking lot and know you’ve distributed 120,000 servings of produce to your community. … You can touch and see and know the impact that you’ve had right around you.”

First Fruits Farm was founded by former NFL center Jason Brown in 2013, after he ditched the career that made him a millionaire. He played seven seasons for the Baltimore Ravens and St. Louis Rams before walking away at the age of 29 from lucrative offers to continue playing.

In 2012, Jason and wife, Tay, packed up their family and moved back to North Carolina, buying the land that became First Fruits Farm. Unlike other farms that donate excess food to the hungry, First Fruits donates almost all of its harvest every year. Donations and rental income from an event hall help to pay the bills.