The Gospel According to Nightcrawler 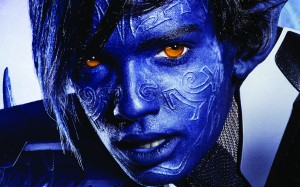 When moviegoers were first introduced to Kurt Wagner more than a dozen years ago in the blockbuster film X2: X-Men United, he was darting through a legion of hapless Secret Service officers at the White House. At first glance, he appeared as a fierce blue demon-looking character that was able to disappear into thin air and reappear across the room.

For those who don’t follow the alternative universe of comic book imagination and discussions of “mutants,” Wagner is one of the most fascinating characters introduced in the X-Men franchise.

There was more than a ripple of thrill coursing through the veins of comic book fans when it was announced that Nightcrawler would reemerge in this year’s blockbuster X-Men: Apocalypse. Mysteriously, the character has been absent from the last five films in the series.

Nightcrawler has been one of Marvel Comics’ most unique and complex superheroes since 1975. For those outside the X-Men cult of fans, the series revolves around a cast of characters that have some form of genetic mutation that manifests itself through extraordinary abilities. They have names such as Wolverine, Cyclops, Magneto, and Rogue. The mutants can control the weather (Storm), blow freezing cold wind (Iceman), or walk through walls (Kitty Pryde, aka Shadowcat). As you would expect, they are treated as freaks and ostracized from society. The storyline revolves around the struggle between the humans and mutants and the need to fight prejudice, suspicion, and bigotry when dealing with people who may have different looks or talents.

Perhaps the most intriguing characteristic about Nightcrawler is that he is a mutant of faith — a devout Christian. Out of all the myriad of cartoon superheroes created in the last fifty years, very few have articulated or been identified with a specific religious faith.

There have, however, been exceptions to the rule. In 2002, it was revealed in the comics that Ben Grimm (aka The Thing) of The Fantastic Four was Jewish. Clark Kent (aka Superman) was raised Methodist. In the movie Daredevil, crucifixes and other religious iconography flood the screen (as well as visits to the confessional) in order to convey Matt Murdock’s struggle between vigilantism and his boyhood Catholic faith.

To their credit, the screenwriters, director, and producers of X2 allowed Nightcrawler to retain his purity of faith and hope. They skipped the subtle, read-between-the-lines type of allusions to his Christianity and let him express full-metal devotion. Nightcrawler takes refuge in an abandoned cathedral in Boston, festooned with statues of Jesus. When he is nervous, he holds a crucifix and says the rosary in German. When he needs to summon inner strength, he recites the Lord’s Prayer. When the group is confronted with tragedy, he pastorally quotes Psalm 23.

Awash in hellfire, brimstone, and lazerbeams, X-Men: Apocalypse was this summer’s big screen spectacle loaded with melodramatic screen banter about false gods and Four Horsemen, all bursting out of the rubble of ancient Egyptian cults. While some observers rightfully complain when Hollywood turns its back on religion, it must be pointed out that some films overdose on discombobulated spirituality. Apocalypse may well have been one of those films.

In the midst of the metaphysical chaos of an X-Men film, you can thankfully depend on the pointy-eared blue character (this time played by Kodi Smit-McPhee) with the tail to make the sign of the cross and pray: “Dear Father, hold me in the light of God. Protect me from danger. Save me by your command. Listen to my prayer and keep me safe.”

Quite simply, Nightcrawler is one of the most devout and unconventional Christian characters that has ever been portrayed on the big screen. Furthermore, his distinct characteristics span his portrayal in comic books, graphic novels, and an animated film. He talks righteously about sin and the power of faith, without the slightest hint of holier-than-thouism. Although he has every right to be angry at humans for their bigotry, he chooses to help them. He has fears, but he acts with courage through the power of prayer. He quotes the Scripture to find strength that his genetically mutated special powers cannot give him.

In the movie version, Nightcrawler’s faith is further highlighted in that his body is covered in tattoos, one for each of his sins. He calls them his “angel marks.” In a form of penance, they are self-inflicted ancient Enochian symbols considered to be an angelic alphabet.

When Nightcrawler first began with the X-Men, he was not conceived as a religious superhero. He was a swashbuckling adventurer with a good sense of humor and a special charisma with the ladies. He even became the leader of the British superhero group Excalibur.

His unique look always made him appear to be something that he was not — namely a demon. The creators used his image to further press their point that prejudice and bigotry brutally cloud our judgment in being able to truly judge a person. This was only heightened when Nightcrawler began quoting Scripture, praying, and hanging out in abandoned cathedrals. He began to be mentored by a priest at Church of Michael the Archangel in Brooklyn and studying for the priesthood.

For a period of time in the X-Men comics, Nightcrawler was shown wearing a clerical collar and even presiding over the funeral of a friend. In the midst of his theological studies, he also struggles with his faith, the tremendous injustice that he sees all around him, and what it would mean to become a priest.

In the graphic novel Uncanny X-Men Vol. 1: Hope (2003, written by Chuck Austen), Nightcrawler is staring at a life-size crucifix in St. Patrick’s Cathedral when he says, “Your death was intended to show us a shining example of how we should live in loving union with you and those around us. Yet even those of us who hold you deepest in our hearts — fail — in keeping true to your divine word.”

In continuing his confession, he says: “Clergy, parishioners, priests — me. I have such thoughts — feelings I cannot escape — the desires for the touch of a woman.” While the temptations of the flesh weigh heavy on his conscience, Nightcrawler’s vastly more threatening challenge is against the racist and religious humans of the Church of Humanity, a Ku-Klux-Klan type of anti-mutant organization.

With the gritty and heart-torn anxiety of the Psalmist, his poignant monologue continues by unleashing his frustration on a seemingly standoffish God. “And now another Holy War is brewing — more fools take up weapons of murder in Your name. And You allow it. Perhaps even encourage it. If we take You into our hearts, does that mean fighting and killing in Your name — or not fighting and being killed in your name? Which is the right answer? And what purpose does it serve to torment your most faithful when the goal is maybe one day sitting beside you — alone — possibly forever apart from the ones we love and desire — who chose wrongly or failed your uncertain tests?”

The scene concludes with Nightcrawler looking at his crucified Jesus and saying, “When next we meet, I expect answers.”

Did God give up on the mutants?

With the heightened popularity of the X-Men movies, a DVD collection of animated TV episodes from the early 1990s was released entitled X-Men: The Legend of Wolverine (Buena Vista, written by Eric Lewald, Mark Edward Edens, and Sidney Iwanter). It includes an entire episode devoted to the origin and theological disposition of Nightcrawler.

The story takes place within a monastery in a small Bavarian village in Germany. Three of the X-Men (Wolverine, Gambit, and Rogue) find themselves being aided by monks in the aftermath of an avalanche. Having been mistaken for a demon by the townspeople because of his looks, Nightcrawler explains to Wolverine and his friends that his genetic mutations were evident from birth and that the villagers chased him and his mother out of town.

His mom (Mystique) also abandoned him as a child (in the comics, she throws him over a waterfall) and a family of travelling performers took him in. When he was young he was able to work in the circus, but he was still treated as an outcast, “shunned and hated.” In talking with Wolverine, Nightcrawler says, “Though all people are flawed and struggle with the capacity for sin, none likes to be reminded of our shared human weakness. My appearance does not make it easy.”

“Don’t it make you crazy?” Wolverine asks with incredulity.

“It did once, but then I found peace by devoting my life to God,” said Nightcrawler. “He directed me to this place [the monastery] where they value the character of my heart, not my appearance.”

This only sends Wolverine further into a rage. “What are you talking about? God gave up on us long ago!” Nightcrawler counters, “No, my friend, God does not give up on his children — human or mutant. He is there for us in our times of joy and to help us when we are in pain — if we let Him.”

Later, Nightcrawler tells Wolverine, “We are alike, you and I — angry at the world. My pain drives me to seek God, yours drove you away.” Wolverine is further infuriated when he asks why God would have allowed him to be treated so badly. “Our ability to understand God’s purposes are limited,” says Nightcrawler, “but take comfort in the fact that his love is limitless.”

The episode concludes with Wolverine kneeling in a French cathedral reading the Bible and saying, “I will give thanks to you O Lord. Though you are angry with me, your anger is turned away and you have comforted me. I will trust you. I will not be afraid.”

Not a bad message — especially coming from a thoroughly unconventional superhero.