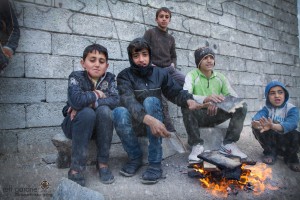 At the age of sixteen, the Lord met Nastaran Farahani in a vision. While in the shower, she heard a voice telling her to repent and that she would be washed of her sins. Though at first she did not understand, God would soon make clear the message he had sent. Around the same time, Nastaran’s sister, who was then living in Holland, also received a message. A woman she knew came to her after having a vision in which she saw three women sitting on a bed, putting their trust in Christ. This friend gave her a Bible and told her she must go visit her family in Iran.

In spite of their initial reaction, the Lord was at work in the Farahani family. Within two months both of her Muslim parents came to know Christ as well and they all began to attend church. At the time, church buildings were still open in Iran, but when persecution came, they were no longer safe. The family then decided to gather at home, thus starting a house church. This marked the beginning of a long and difficult road for Nastaran. After returning to Iran from Dubai, she and her husband, Yuna Sabet, were arrested.

“When we arrived, the officer checked our passport and then called my name,” Nastaran says. “He took my bag and started searching. Then someone else told him to take my husband’s passport too. They took us to the separate room with no window and started to interrogate us. Lots of my close friends had been arrested in the past. One was held in jail for nine months. They were constantly telling her that she would be executed. So it was really scary for me.”

Believing that Christians planned to work against the Iranian government, the officers questioned Nastaran about her cell group. They wanted the names of 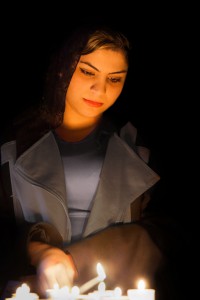 An Assyrian Christian refugee, living in Zarqa, Jordan, struggles to keep her faith and hope burning. Thousands like her are waiting to return to their homes on the Nineveh Plain in northern Iraq. Jeff Gardner, Picture Christians Project, www.picturechristians.org.

members who might have been connected to people outside of Iran and asked her what her plan was. Eventually, they let Nastaran go but kept her passport so she could not leave. Two or three times they called her in for further interrogation and did not release her husband for three months. During this difficult time, however, the Lord sustained her with his word.

“When I was interrogated, the word of Jesus in Matthew 10:19 came to me,” says Nastaran. “I was so scared and when I’m afraid I cannot talk. But I was given what to say just as Jesus promised. I told them things that would not have come up to me on my own. They kept telling me that I am a liar. He tested me to see if my hands were shaking. He offered me tea but I didn’t drink because I heard many stories about how they would give women something to drink that would make them fall asleep. I also heard stories of them raping women in the jail. And I was so scared of that.”

When they finally returned her passport, she was told to leave and never come back. In 2011, after years of serving the Lord in many closed countries including Iran, Turkey, Dubai, Syria, and Lebanon, Nastaran and her husband came to the United States. They now live with their two daughters in California, working with Farsi speakers from Iran, Afghanistan, and Tajikistan through church planting. When asked how persecuted Christians feel about their Western brothers and sisters, Nastaran says that they do not feel abandoned, but do believe that they don’t appreciate the religious freedom they have.

“We know it’s not easy for those in other parts of the world to understand what life is like in Iran or countries like Iran because they live in freedom and they can worship God without the fear of being arrested,” Nastaran says. “However, these days because of the influence of…social media, it’s easier to know and to be aware of the condition of the people who live under persecution. For the same reason people in the West are becoming more aware and are getting more involved in helping their brothers and sisters, which I know is very encouraging to the people in Iran. I do not think the Iranians feel abandoned or uncared by other Christians in the West. Because, as you might know, there was some Christian prisoner who had been released as a result of Christian support in the West. However, they might think that people who do live in free countries do not really appreciate their freedom and take it for granted.”

Nastaran went on to say that there are many more ways the Western church can show up for their persecuted brothers and sisters, beyond using a hashtag to bring awareness. “You can keep praying for them. I know that there were people praying for me while I was going through that difficult time and it’s really encouraging, when you’re undergoing persecution, to know that your brothers and sisters are standing with you by their support, prayers, and also keeping your situation in the news. The governments like Iran are afraid of losing their face because of the [negative publicity] against them. So spreading the news of persecution can be a huge help and hopefully help release them. There are many ways we can help our brothers and sisters such as writing a letter to them, talking to the government officially, or helping their family outside of prison.”