The Gift That Kept on Giving 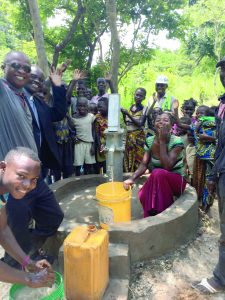 This community well in the Republic of the Congo is one of the more than 100 wells that the Woodworth Foundation has drilled in Africa to provide safe water for residents. Photo by the Rev. Kyungu Bertie, courtesy of the Oklahoma United Methodist Foundation.

By Boyce A. Bowdon –

It was Wednesday, May 27, 1981. The session of the Oklahoma Annual Conference of The United Methodist Church was underway at Boston Avenue Church in Tulsa. Next on the agenda was a presentation of the largest gift for missions the Oklahoma Conference had ever received: a multi-million-dollar-bequest from the estates of Wynne Wayland “W.W.” Woodworth and Rose Woodworth, a Methodist couple from southcentral Oklahoma who died during the 1950s.

Winston Acree – the Woodworths’ long-time friend and business associate who had administered their estates – began his presentation by telling why they settled in Oklahoma (still Indian Territory) back in 1903. W.W. was 24 and Rose was 27. Married less than a year, the couple had been living in Jennings, Louisiana, a town near Lake Charles. They had been getting by on what W.W. earned as a barber, but they wanted to do more than get by. One of W.W.’s brothers, Lyle, had settled in Edenvale, California. In his letters to W.W. and Rose, Lyle had assured them if they moved to Edenvale they would prosper. They decided to follow his suggestion.

California was about 2,000 miles from Jennings. Acree explained that most Americans with that far to go went on stagecoaches or trains; they didn’t drive their cars because they believed cars were a passing fancy. Not the Woodworths. They decided to drive. After several days, they travelled across Louisiana and Texas and into the Chickasaw Nation of Indian Territory. They had noticed steam spewing from the radiator. It had happened before. Just as they were coming into a town called Cornish, Oklahoma, the motor died and the car coasted to a stop.

W.W. waited until the radiator cooled, then filled it with water. Then he tried to start the car, but it wouldn’t start. After several failed attempts, he realized that the engine was damaged beyond repair. They were stranded. Acree said the Woodworths gave up their dreams of California and settled down in Cornish.

Acree told the session of the instructions Rose and W.W. designated in their wills for the distribution of their estates. Rose died of cancer in August 1951 at age 74, and W.W. died in December 1958 at age 79. They did not have children of their own. Both of them left three-fourths of their estates to what soon became the Oklahoma Conference of the United Methodist Church to be used only for mission causes.

The Oklahoma Conference share of Rose’s estate was $312,506 and the portion from W.W.’s was $1,300,000, totaling more than $1.6 million. Hoping to increase the value of their estates, they arranged with Acree to manage their estates for 21 years after the death of the one of them who died last, and to add the earnings to their estates. They also instructed Acree to distribute a percentage of the earnings periodically to ministries so they would have money for mission work.

Acree said during the 21 years that he administered the two estates, he distributed $10 million to various ministries. The money provided scholarships that helped educate doctors, nurses, teachers, missionaries, and other caregivers in mission ministries; relief funds for places devastated by natural disasters; grants to help start ministries for emerging mission projects, and funds for various other mission work all over the world. While Acree spoke, people paraded through the sanctuary carrying banners with the names of ministries that were recipients from the Woodworth funds.

Acree then a handed a check to Howard Plowman, chair of the Oklahoma Conference Board of Global Ministries, for the balance in the two Woodworth Estates. The check was for $4,123,000. Added to the $10 million Acree had already distributed, that meant the Woodworth estates as of May 27, 1981, had provided more than $14 million for missions. Since 1981, Woodworth Estate has provided an additional $20 million.

Acree closed his presentation with a personal statement: “My father died when I was 13, and from then on the Woodworths were like parents to me … When they asked me to administer their estates, I was determined to do everything within my power to be faithful to the trust they placed in me.” He paused. “I am grateful God enabled me to do what I had been entrusted to do. Today is the happiest day of my life!”

As director of communications for the conference, I wanted to know more about the Woodworths. I called Winston Acree, the man who knew them best and loved them most. He said he would be at the conference headquarters in Oklahoma City the next Wednesday and would be glad to drop by my office.

When asked about their attempted cross-country journey, he wasn’t surprised the Woodworths decided to drive their car instead of taking a stagecoach or train like most people did. “They didn’t always do what most people did,” he explained. “Mr. Woodworth and Rose could see potential most people didn’t see. I think they saw cars had tremendous potential and they sensed the day was coming when most people would drive cars to get across town or across the country.”

Asked about how the Woodworths reacted when their car left them stranded, Acree (pictured right) said he had been with them during or immediately following two bank robberies, numerous booms and busts in the oil business, and the devastating Oklahoma Dust Bowl and the Great Depression that depleted Oklahoma’s population. “I never saw them panic,” Acree said. “They were always looking for the best way to fix a problem, not for somebody to blame it on.”

In response to my question about how the Woodworths prospered in a place with limited opportunity, Acree said their industriousness was a big factor. Referring back to when the car left them stranded, he said as soon as they decided to settle where they were, W.W. started looking for a job, found one at the sawmill, and took it. 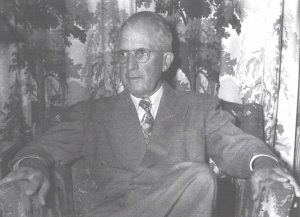 W. W. Woodworth (pictured here) and his wife Rose settled in Oklahoma after their car broke down. They prospered and left
millions to Methodist missions. Photo courtesy of David Acree.

“The owner of the sawmill was impressed by how diligently W.W. worked and how well he got along with everybody. In a couple years, he offered to sell the sawmill to the Woodworths. Using money they had saved to get started in California, and some they had saved from sawmill earnings, the Woodworths bought the business.” In 1907, soon after Oklahoma become a state, construction began on the Cornish Orphans Home, which was to house 1,500 children. Stimulated by the construction, Cornish grew and so did the Woodworths’ lumber business.

In 1912, a railroad came into the area, bypassing Cornish by a mile. The Woodworths and most residents of Cornish moved to be near it and starting a new town: Ringling. The Woodworths kept the sawmill in Cornish and started a new one in Ringling. A few years later, they sold both sawmills, and used what they got for them to buy the controlling interest in the bank at Ringling. W.W. soon became bank president.

In 1913, a major oil boom began in Healdton, about 25 miles from Ringling. The Woodworths owned land in the area, drilled on it and struck oil. They used the money from the oil to buy more land, drilled on it, struck more oil, and made more money. 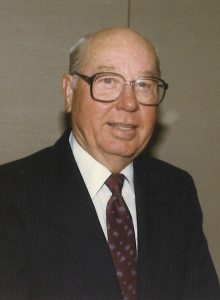 “I’ll never forget what Mr. Woodworth told me made the biggest difference in their lives,” Acree said. “He said what helped them most was a lesson he learned from his father. It was John Wesley’s formula for making money a blessing instead of a curse: ‘Gain all you can, save all you can, and give all you can.’” W.W.’s father made a living for his family by farming and was also a local preacher in the Methodist Church and had studied the teachings of John Wesley while preparing for the ministry.

While he was still in his teens, W.W. committed himself to follow Wesley’s formula, and years later, when he told Rose about it, she made the same commitment. “Mr. Woodworth told me that he and Rose tried their best to gain all they could, save all they could, and give all they could,” Acree said. “He believed their commitment influenced everything they did that helped them prosper – not just financially, but in all ways.”

Why did the Woodworths give most of their estate to Oklahoma Methodists to use for missions? Acree said Rose answered this question in her Last Will and Testament, which she signed in November 1950. “Rose had been fighting cancer a couple of years,” he said. “Her doctors had done everything medical science of the day could do. She knew she didn’t have long to live.” 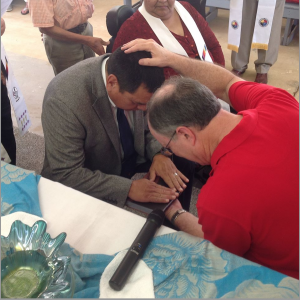 Rose spelled out in her own words the two reasons she was giving most of her estate for missions. First, she believed “the very preservation of civilization itself depended upon the acceptance of Christianity by people throughout the world.” Second, she wanted “to make some contribution to enable this to happen.” When Rose told W.W. what she had decided to do with her estate, he immediately replied that he would do same with his.

Acree was not surprised when Rose and W.W. decided to give most of their wealth to Oklahoma Conference for mission ministries. “As long as I had known them, they had used their money to help support worthy causes, and obviously they thought there was no more worthy cause. I believed the greatest satisfaction they ever received from their money came from sharing it.”

Sharing what God entrusted into their care was a way for W.W. and Rose to be faithful to what Jesus called the greatest of all God’s commandments. It was what motivated, sustained, and empowered them. Sharing was a way to love the Lord – to express their gratitude for God’s blessings, to demonstrate their trust in God, and to continue carrying out their commitment to let God work through them. It was a way to express their love for their neighbors: to show compassion, to ease pain, to open opportunities, and to stimulate hope. Above all: to help others experience God’s empowering love. Finally, sharing with what God had entrusted into their care was a way to love themselves. Nothing gave them greater satisfaction.

Boyce Bowdon, a retired United Methodist communicator and former communications director for the Oklahoma Conference, has been a frequent contributor to Good News. 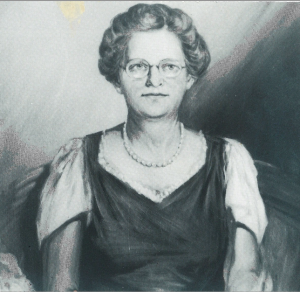 An artistic rendering of Rose Woodworth. 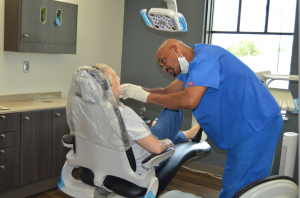 Dr. Alan McDonald, director of dentistry, at the Neighborhood Services Organization (NSO) in Oklahoma City. The Woodworth estate has been a substantial financial supporter of the NSO. Photo by Boyce Bowdon.