Revisiting The Character of a Methodist 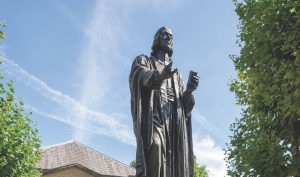 The founder of our movement taught that true faith is not just a matter of believing or doing, but of becoming. God is making us new through the blood of Christ and the power of the Holy Spirit. We are becoming what God always meant us to be.

Character Development. Today what we often call “character development” involves the cultivation of traits that will help us succeed in life. To offer one example, when I was a teenager, I went to Philmont Scout Ranch for a two-week trek through the mountains of New Mexico. Mile after mile, with a heavy pack on my back, I dragged my fourteen-year-old frame along, even when I was tired, hungry, and wanting nothing more than to watch MTV and eat potato chips. At times those hikes were rapturous experiences. I was immersed in the beauty of nature and the simplicity of life without all the “stuff” I had at home. At other times, they were difficult and tiring. They tested me and forced me to push beyond what I thought I could do at that point in my young life. Through these experiences I learned and grew. Some would say that I developed “character.” In one sense they would be exactly right. I developed traits such as perseverance, fortitude, maturity, and self-awareness.

This is not, however, what Wesley means when he refers to character. Traits like perseverance and self-awareness, for example, could be used for evil ends. Terrorists might show perseverance in pursuing catastrophic outcomes. Con artists might show self-awareness to the extent that they are cognizant of the ways in which other people perceive them. “Character development” must also take place through the sanctifying grace of God. The key is not simply the growth of one’s personal capacities, but growth in holiness.

What is holiness? It is the Spirit’s work in forming us in the likeness of Christ. It is love, as God shows us love in Scripture. It is a life that is ever more liberated from the corrupting power of sin and ever more shaped by sanctifying grace. This is more than character development. It is the development of a particularly Christian character.

It is important to emphasize that the formation of Christian character is God’s work. While we might develop traits within ourselves such as self-discipline or knowledge of some subject, we cannot make ourselves holy by our own effort. Sin is too powerful. Its gravitational pull is too strong. We cannot save ourselves from sin. Rather, we must be saved, and only God can do this.

There are practices we can engage in to invite the work of God in our lives (such as prayer, worship, fasting, and the Lord’s Supper), but apart from the work of God, none of these practices has any real power. We rely utterly on God the Father, who sent his Son Jesus Christ, and who abides with us through the Holy Spirit. Put differently, we cannot evoke Christian character from within ourselves. It comes to us by God’s sanctifying grace. 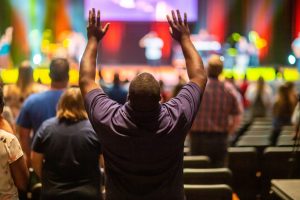 For a person to pray without ceasing means that “his heart is ever lifted up to God, and at all times and in all places.” Photo: Caleb Oquendo (Pexels).

The Love of God Shed Abroad. In response to the question, “Who is a Methodist?” then, Wesley offers this summary, which he spells out in more detail through the rest of the tract:

To have the character of a Methodist, according to Wesley, is to be changed from people who were captive to sin into people who demonstrate an overflow of love. First and foremost, we love God with a strength that can only come from God himself. God is our hope today and forever. To know and serve him is our one true and passionate desire.

God’s transforming work in our lives would be visible in a number of other ways as well. In light of the great sacrifice that Christ has made on our behalf and the salvation we have through him, we will have happiness, peace, and hope. This is not to say we will never experience other kinds of emotions, such as sadness and anger, but ultimately the joy of the Lord will prevail. We can look back on our past lives with joy when we consider the ways in which God has delivered us from sin. Likewise we can look forward with confidence to the eternal life that is our inheritance as God’s children.

In the same vein, the life of a Methodist should also be characterized by gratitude and contentment. Even though we may go through difficult circumstances, we can learn by God’s grace to give thanks in all circumstances. Wesley wrote: “He knoweth ‘both how to be abased and how to abound. Everywhere and in all things he is instructed, both to be full and to be hungry, both to abound and suffer need.’ Whether in ease or pain, whether in sickness or health, whether in life or death, he giveth thanks from the ground of the heart to him who orders it for good: knowing that as ‘every good gift cometh from above,’ so none but good can come from the Father of Lights, into whose hands he has wholly committed his body and soul, as into the hands of a faithful creator.”

Further, he instructed, a Methodist is one who prays without ceasing. This doesn’t mean we must always be in church or on our knees in prayer, nor does it mean we are always crying out to God or forming our thoughts into some conscious communication. Rather, for a person to pray without ceasing means that “his heart is ever lifted up to God, and at all times and in all places…. In retirement, or company, in leisure, business, or conversation his heart is ever with the Lord.” To pray without ceasing, then, is a way of life. It is to live with a singular focus on loving and serving God.

The change that God works in our hearts will also result in love of neighbor. We are to love every person as our own soul, whether we know that person or not. This involves not only caring for their physical needs by “feeding the hungry, clothing the naked, [and] visiting those that are sick or in prison,” but caring for their souls as well. We should aim to “awaken those that sleep in death; to bring those who are awakened to the atoning blood, that being ‘justified by faith,’ they may have ‘peace with God,’ and to provoke those who have peace with God, to abound more in love and in good works.”

Whether we approve of another person’s actions or way of living is irrelevant. We are to love all people, even our enemies, actively seeking their good. “For he ‘loves his enemies,’ yea, and the enemies of God, ‘the evil and the unthankful.’” And “if it be not in his power to do good to them that hate him, yet he ceases not to pray for them, though they continue to spurn his love, and still despitefully use him and persecute him.”

The transforming love of God will evoke certain virtues in our hearts. God will replace envy, malice, wrath, and pride with mercy, kindness, humility, meekness, and long-suffering. The fruit of the Spirit will abound. Christians will forgive those who have wronged them. They will look not to their own interests but to the interests of others. Their greatest desire will be to please God, and they will seek to live in obedience to his commandments. All their lives will be oriented toward the glory of God. For the true Christian, the unwavering rule of life is this: “Whatsoever ye do in word or deed, do it all in the name of the Lord Jesus, giving thanks to God the Father by him.”

We must not allow the customs of this world to draw us away from life in God, wrote Wesley. What the world values and what God values are not the same. “[V]ice does not lose its nature, though it becomes ever so fashionable.” Gluttony, greed, and evil speaking have no place in the life of Jesus’ followers. Rather, we should focus our thoughts upon what is good and true, and we should think, speak, and act in ways that honor Christ.

To be a Methodist, for Wesley, was to be peculiar. He wrote, “By these marks, by these fruits of a living faith do we labour to distinguish ourselves from the unbelieving world, from all those whose minds or lives are not according to the gospel of Christ.” For Wesley, Methodists were not the only real Christians, but to fall into the nominal Christianity so common in his day was to cease to be either Methodist or Christian in a true sense. The Christian life is one in which God so changes our character that we cannot help but seem different to those around us. Perhaps this will once again become an expectation among the people called Methodists.

David F. Watson is a professor of New Testament and the Academic Dean at United Theological Seminary in Dayton, Ohio. He is the author of several books, including Scripture and the Life of God (Seedbed), and lead editor of Firebrand (firebrandmag.com).