The Church in a Storm 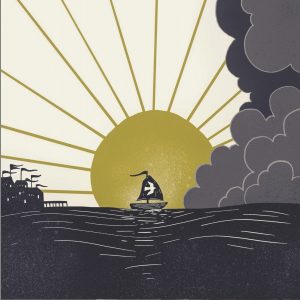 “A terrible screaming began among the English,” John Wesley wrote in his journal, “But the Germans calmly sang on.”

Sailing aboard The Simmons from England to the American Colonies in 1736, Wesley found his ship overtaken by storm after storm. Ironically, the ship sailed in October in an attempt to dodge hurricane season, but now here they were, with the wind and sea tearing the main sail in two and water flooding the boat.

Wesley, a minister starting what would be a failed missionary trip to Georgia, was scared of drowning and found himself in a crisis of faith, “ashamed of my unwillingness to die.” But also on board were 26 Moravian missionaries from Herrnhut, Germany, and as he worried, they worshiped.

It’s fitting that the founder of our movement hoped to avoid hurricanes, because today the United Methodists are facing their own category 5 storm: Being in ministry during a worldwide pandemic and awaiting a postponed General Conference that will determine the future of our denomination.

The thing about hurricanes is that we can see them forming out at sea a long way off, days away. The anxiety builds when the weather reports put all the different “spaghetti model” forecasts on the TV screen showing all possible trajectories, turns, landfall locations, wind speeds, and flooding.

But no one really knows where a hurricane will hit and how bad the damage will be until it actually gets here. And if you’ve ever been through a hurricane, it doesn’t matter how much you prepare or even if you’ve been through one before, when they hit they’re still a shock and they do some kind of damage. The issue is how much, and what it will take to recover.

The anxiety is building. There is shock and there will be damage. But nobody knows what will actually happen until we experience the full ramifications. So what are churches to do while we wait, and who are we going to be in these storms? What’s our plan?

Our plan should be breakfast. Stick with me on this.

In Acts 27, the Apostle Paul sets sail for Rome, and along the way “the weather changed abruptly, and a wind of typhoon strength (called a ‘northeaster’) burst across the island and blew us out to sea” (Acts 27:14, NLT). The crew panics and starts heaving cargo overboard to lighten the load. They lower the lifeboats, but Paul convinces them they’ll all drown if they jump ship, so they cut the boats loose. They can’t see the sun or the stars, so they can’t navigate. And in dramatic fashion, the Scripture says, “at last all hope was lost.”

All fear and no hope. Sound familiar?

Finally, after two weeks of fearfully trying to outlast the weather, Paul’s had enough and offers them … breakfast: “Just before dawn Paul urged them all to eat. ‘For the last fourteen days,’ he said, ‘you have been in constant suspense and have gone without food – you haven’t eaten anything. Now I urge you to take some food. You need it to survive. Not one of you will lose a single hair from his head.’ After he said this, he took some bread and gave thanks to God in front of them all. Then he broke it and began to eat. They were all encouraged and ate some food themselves. Altogether there were 276 of us on board” (Acts 27:33-37).

It wasn’t that the sailors couldn’t eat because the storm left them with no food. They had plenty of food but were too afraid to eat because of the storm. And what did Paul serve first? The Eucharist. Holy Communion. The body of Jesus Christ: “[he] took some bread, gave thanks to God before them all, and broke off a piece and ate it. Then everyone was encouraged and began to eat.” That’s the Lord’s Breakfast. The crew had so many seconds and thirds that they were throwing food overboard!

As our hurricane approaches, how do we do the same? How can pastors and congregations learn from and lead like the Apostle Paul?

One possibility is by looking at the “Waffle House Index.” What is that? It is an informal metric the Federal Emergency Management Agency (FEMA) has used to determine how bad a storm is and how long recovery will take. Why? Because the corporate leadership at Waffle House have a whole system for keeping restaurants open in a storm. They know how to do natural disasters.

The index is three colors based on what they can offer: green means Waffle House is still serving the full menu; yellow means they’re serving a partial menu because there is no power or water; red means no menu and the restaurant is closed, so you know the damage is bad – really bad. 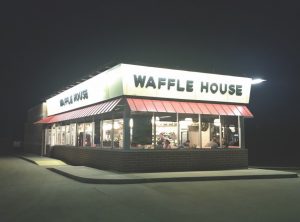 We need to be a “Waffle House church,” first offering people the body and blood of Jesus Christ, then offering a full menu of the faith even in the midst the storm. How?

First, we need to know our menu: the full story of Scripture and the robust depth of our theology, not just our favorite orders (the items we like to pick and choose). How do we learn (or re-learn) it? Maybe we need a congregation-wide confirmation class, a deep dive into the Apostle’s Creed, maybe a renewed form of small groups that Wesley called class meetings and banded discipleship. Whatever a Holy Spirit imagination gives us for preaching and teaching, we can’t know our menu just for the sake of more information, but for the sake of transformation into being like Christ.

Second, we need to become better customers. Yes, there’s a lot of talk about how Christians shouldn’t be consumers, but that’s not what I’m talking about here. If you’ve ever waited tables, you know customers are most known for one thing: complaining. Maybe it’s because “the customer is always right” even when they’re wrong. I get it, because if you feel left out of the preparation process (not in the kitchen, so to speak), or your expectations haven’t been met (“This isn’t what I ordered!”) it’s easy to become disenfranchised. But we’ve got to move away from all the grumbling, criticizing, and fear-mongering. In other words, we’ve got to stop screaming.

Third, we need to move from being customers to being waiters. Theologically speaking we’re supposed to be “servants,” because Jesus says things like, “For even the Son of Man came not to be served but to serve others and to give his life” (Mark 10:45, NLT). And of course, one of our mandates is to have the same attitude of Jesus Christ who took the position of a servant (Philippians 2:5-7).

Consider a story from last November of a Waffle House in Birmingham, Alabama. Because of a glitch in scheduling, just one cook was on duty after midnight to manage about 30 hungry and inebriated customers. He couldn’t keep up, but then one customer got up, put on an apron, and started washing dishes. Another started cleaning tables and serving coffee. With the two customers-turned-waiters at work, the lone employee could keep cooking.

To be this kind of servant in the storm evokes what Wesley wrote about later in his journal at sea: “There is something special about these Germans. They are always so happy! And, they do the menial jobs on this ship without protesting.”

Remember, we’re not a bunch of inebriated customers at one in the morning, we’re servant people filled with the Holy Spirit (Acts 2). This means our storm might give us the opportunity to creatively step up and serve the souls of some hungry and angry people (aka “hangry”). But like Paul, we’re serving them Jesus in the middle of the storm because Jesus is the one who created the very wind and waves (Colossians 1:16) and then later spoke to the storm and told it to calm down (Mark 4:35-41).

And isn’t it interesting that when he was in the storm at sea Wesley asked himself, “How is it that thou has no faith?” which is the same thing Jesus asked his disciples in their boat? Jesus is asking us the same question now.

John Wesley said, “You have one business on earth – to save souls.” What does that business look like in our churches in this season of storms? It looks something like the way late chef Anthony Bourdain described a Waffle House: “Where everybody, regardless of race, creed, color or degree of inebriation, is welcomed. Its warm, yellow glow – a beacon of hope and salvation – inviting the hungry, the lost, the seriously hammered all across the south to come inside. A place of safety and nourishment. It never closes. It is always faithful, always there for you.”

And what happens when the storm moves from a metaphorical hurricane to a literal pandemic? The Waffle House had to move to essential staff cooking up a limited menu for take-out. The restaurant building may be closed, but you can still get waffles to eat at home. While not ideal, it sure beats no waffles at all.

The church is still open, but only for essential staff to prepare limited worship services online and Bible studies for streaming-out. The church building may be closed, but we can still receive Jesus in our homes. The basics of the menu have not changed, and the opportunity of how to be better servers has shifted.

Eventually, Jesus will return and there will be no more storms (literal or metaphorical). And when he does we know that, “The servants who are ready and waiting for his return will be rewarded. I tell you the truth, [Jesus] will seat them, put on an apron, and serve them as they sit and eat!” (Luke 12:37, NLT). Until then, we might as well set the table.

Omar Al-Rikabi is the senior pastor of Heath United Methodist Church in Heath, Texas, and the author of The Advent Mission (Seedbed). This article first appeared on WesleyanAccent.com. You can follow him on Twitter @omarrikabi.