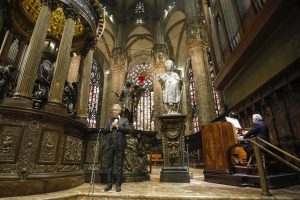 Perhaps no singular image better captured Easter under the treacherous cruelty of the coronavirus than Andrea Bocelli performing a solitary sacred concert in the spectacularly cavernous Duomo di Milano, the cathedral in Milan, Italy.

By the time the sun had risen on Easter morning, more than 108,000 deaths had occurred around the globe because of COVID-19. According to Johns Hopkins University, there were more than 1.7 million cases worldwide and the virus was detected in 177 countries. At that time, more than 400,000 people had recovered internationally. By the time you read this, all those statistics will be woefully outdated.

“Zoomed” out and stir crazy, legions of sequestered souls were craving relief – something of substance, a dash of beauty, a sliver of hope. There would be no ostentatious Easter bonnets at church this year. There would be no large family feasts – including Aunt Judy’s deviled eggs on the most sacred day of the year. There would be no neighborhood Easter egg hunts for the children. For many, the Sunday morning service included singing “Up from the Grave He Arose” in pajamas and house slippers while live-streaming and praying for the speedy and joyous return of congregational worship – even surrounded by those bellowing off-key.

Bocelli had been invited by the city of Milan and the cathedral to lift the spirits of grief-stricken Italians. As a certifiable star of opera, classical, and pop music, the tenor has sold over 90 million records worldwide.

“On the day in which we celebrate the trust in a life that triumphs, I’m honored and happy to answer ‘Si’ to the invitation of the City and the Duomo of Milan,” Bocelli said in the video’s introduction. “I believe in the strength of praying together. I believe in the Christian Easter, a universal symbol of rebirth that everyone – whether they are believers are not – truly needs right now. … It will be a joy to witness it, in the Duomo, during the Easter celebration which invokes the mystery of birth and rebirth.”

The setting was awe-inspiring. Milan’s Cathedral is an architectural gemstone. It has been under construction on-and-off since 1386. It is nearly the largest sanctuary in Italy, second only to St. Peter’s Basilica in Rome. “What a wonder it is,” observed Mark Twain about the cathedral in his book Innocents Abroad. “So grand, so solemn, so vast!” There are 135 marble spires and thousands of statues of prophets and patriarchs, martyrs and saints.

The size and scope are hard to comprehend. More than 40,000 people can fit comfortably within the cathedral. Sadly, more than half that number of Italians have died from COVID-19.

On Easter, the cathedral was empty – with the exception of Bocelli, organist Emanuele Vianelli, and a skeleton film crew. The tenor and musician were the only two that did not wear masks.

The international opera sensation sang several stirring numbers in Italian from inside the cathedral. Bocelli then slowly walked through the gargantuan columns down the center aisle to sing “Amazing Grace” in English overlooking the barren plaza outside as his finale. The first verse was unaccompanied by the organ. It was as if he was rolling away a stone and taking the empty-grave message of Easter outside the confines of altar and sanctuary to a hope-starved world.

The response was astounding. Nearly 3 million people around the globe witnessed the half-hour concert on YouTube as it was being performed. Within 24 hours, the performance had 32 million views. For so many – approaching Easter from vastly different spiritual perspectives – this was the message:

Amazing grace! How sweet the sound
That saved a wretch like me!
I once was lost, but now am found;
Was blind, but now I see.

The words of the song have unique resonance with Bocelli. As many know, he was diagnosed with congenital glaucoma at 5 months old, and became completely blind at age 12, following a sporting accident.

“I am moved and delighted to have received such an overwhelming reaction that has gone beyond our highest expectations,” Bocelli said the following day. “For an artist, yesterday’s event is the reason for the sacrifices of a lifetime; for a believer and a Catholic as I am, it was further confirmation of the benevolent smile with which the Heavenly Father looks to his children. It was an immeasurable honor and privilege to lend my voice to the prayers of millions of people, gathered in a single embrace – a small, great miracle of which the whole world was the protagonist and which confirms my optimism about the future of our planet.”

’Twas grace that taught my heart to fear,
And grace my fears relieved;
How precious did that grace appear
The hour I first believed! 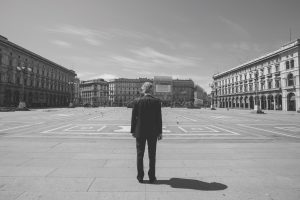 The weeks prior to Easter had been overwhelming for Italians. Funerals had to be cancelled. Social distancing had been rigidly enforced. There had been video footage of a convoy of military trucks transporting bodies away from an overwhelmed crematorium in the northern city of Bergamo, 30 miles east of Milan. The national newspaper Corriere della Sera reported that the operation had taken place with 18 army trucks transporting around 60 coffins away from Bergamo to be taken to neighboring cities. “The crematorium in Bergamo, working flat out on a 24-hour basis, can cremate 25 deceased persons. It’s clear that it could not handle the numbers seen in the past few days,” said the statement from the Bergamo municipal government.

Yea, when this flesh and heart shall fail,
And mortal life shall cease,
I shall possess, within the veil,
A life of joy and peace.

The YouTube audience responded to the concert with comments filled with gratitude. “Andrea Bocelli’s songs speak to the soul, especially in these devastating times. May God heal our land and strengthen every living soul on Earth. Lord, your children are crying out for your love,” said one fan named Sydney.

“Extraordinary voice,” said another fan named Hayley. “Such beauty. We all need this during these difficult days. We must support one another, love, be grateful. Life is so delicate, precious.”

The great novelist Fyodor Dostoevsky once wrote, “Beauty will save the world.” Since he penned that premise, those words have been hotly contested. Perhaps from the response to Bocelli’s affirmation of faith through his songs, we can see the outline of what Dostoevsky may have meant.