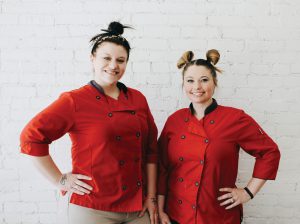 The readers of World, a Christian news magazine, nominated 200 small ministries over the past year that offer challenging, personal, and spiritual help to those in need. After countless interviews, and a 3,000-mile road trip, this list was narrowed down to five organizations as contenders for Hope Awards issued by World. Here are brief profiles of these innovative faith-based initiatives.

In 2008, 24-year-old Rachelle Starr walked into a strip club with three friends. They wore turtlenecks, went without make-up, and had to pay the bouncer just to get in the door. Across the street, their husbands waited and watched as Starr and the other two women asked the owner of the club if they could bring the dancers a weekly meal. Though skeptical, he agreed. Ten years later, Scarlet Hope is still taking food to clubs every Thursday and building relationships with the dancers.

Since that first day, this ministry has expanded to provide vocational training, as well as Bible classes. During the week the volunteers drive the streets looking for sex workers. They distribute roses with their business cards and care bags filled with an outfit and toiletries. Starr utilizes technology developed by Seattle Against Slavery to gather and message the numbers prostitutes share online. She receives a variety of responses ranging from rude rejections to desperate pleas for help. Along with meeting these physical needs, the volunteers of Scarlet Hope also pray with the workers and tell them that Jesus loves them.

Unable to provide safe transitional housing for the women who come to them for shelter, Scarlet Hope has partnered with other organizations nearby. This has also enabled them to focus on helping sex workers build a life outside of the industry. In 2017 they started a Career Development Program. During this 18 month training, women learn life skills from a Christian perspective, receive counseling, and obtain job experience. Taking classes earns students “Scarlet bucks,” which they can trade in for donated clothes and household items. Starr says that providing jobs with dignity for women who once sold their bodies to survive is vitally important. A sign at Scarlet’s Bakery sums this concept up quite nicely: “We don’t hire people to bake cupcakes. We bake cupcakes to hire people.” 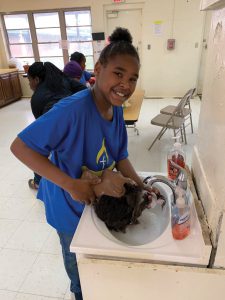 At Little Light Christian School (LLCS) in Oklahoma City, the students start the day with a unique ritual: changing out of their street shoes and into a pair provided by the school. It’s a matter of safety, says Principal and founder, Robin Khoury, so all the students get rid of their status symbols the moment they walk in the door. In order to attend Little Light, children must have at least one parent in prison. Most struggle academically and deal with a wide range of emotional trauma that only adds to their burden.

Principal Khoury opened this free Christian school in 2012 after volunteering for almost two decades in prison ministry. While there, she learned that children with parents in prison struggled significantly in academics. The curriculum comes from a Christian worldview, modified from Khoury’s time homeschooling her own children. However, it can also be adjusted to meet each students’ needs. One boy found motivation to catch up to his grade level by being allowed to work on an iPad, while a fifth-grade girl has gone from being emotionally closed off to forming connections with the other students.

Teachers are equipped to care for kids who have experienced deep trauma and trained on how to try and de-escalate bad behavior. LLCS not only provides two meals and two snacks every weekday, but it also sends students home with backpacks full of food on the weekends. When classes end, LLCS offers an after-school program from 3 p.m. until 5 p.m. The school is limited on resources and Principal Khoury often isn’t sure how she will pay all of her teachers. However, she also has many stories of how God has provided in the past and trusts him to continue in his faithfulness.

Forge Center for Virtue and Work

Founder James Whitford began working with the homeless in Joplin, Missouri, nearly 20 years ago when he and his wife rented out a room at the Red Cross. Calling their shelter “Watered Gardens” in honor of Isaiah 58:11’s encouragement to work with the poor, the Whitfords offered necessities to the impoverished of their city. After reading Toxic Charity and developing a desire to empower people to escape poverty, they created a “Worth Shop.” Here, those who come in can do simple tasks for a set amount of time to earn what they need. Fifteen minutes of work buys four items from the thrift shop, an hour earns a week of groceries, and twelve hours a week reserves a bed in the shelter.

Three years later, Watered Gardens developed “Forge Center for Virtue and Work.” This program takes six men through three phases to help them get back on their feet. Each must work at the Worth Shop for three months before they are allowed to move into the Forge dorms and enter phase one: education. Here they take classes for eight hours a day, learning a wide range of topics including the Bible, health, and legal living. Work readiness follows this phase in which Forge finds companies willing to hire one of their students. They then shift to a transitional phase where they move out of the dorms and into a house with two other students. Finally, they take the step to independence. In order to graduate, they must have a full-time job, their own place, and medical insurance.

There is a 5 percent graduation rate. While this may sound like a small number, it is actually very good for an intensive program like Forge. Many get 45 days in and believe they can stay sober on their own. Those who do, often end up back at Watered Gardens drunk or high. Without heart change, director Jamie Myers says, there will be no behavior change. Whitford believes that the most effective programs are work-oriented and outcome-driven. One day, he hopes to create a network of nonprofits like Forge around the United States.

When marketing consultant David Palmer saw how difficult it was for the homeless of Wheeler Mission in Indianapolis, he prayed, then went to Google. Though he didn’t have a background in carpentry, he and some friends put together a piece of furniture and, based on the positive feedback they received, decided that working with wood was the answer. This began Purposeful Design. Here, men leaving addiction, homelessness, or prison are able to work and find community. Sales have continued to grow as the men create tables and earn loyal customers like Purdue University.

Recently, this non-profit was able to move into a new, larger facility. Their lobby displays placards with ways Purposeful Design has changed the lives of the men who work there. “I used drugs and sold them,” one reads. “Then I had an encounter with a man named Jesus.” Another says, “God picked me up, sanded me off, put a new coat of stain over me, and set me back on the shelf.”

The only requirements to get hired is that a man must be able-bodied, clean and sober, and ready to follow instructions. But teaching woodworking is only one part of Purposeful Design’s goal, says Palmer. They’re also working to “get under the skin.” Without heart change, the skills and paychecks are just a “Band-Aid for a terrible wound.” Employees participate in morning prayer and weekly bible studies. Though many of the men don’t claim to be Christians, they continue to attend these meetings and ask questions. Accountability and friendship keep them coming, providing community and dignity within their work environment. 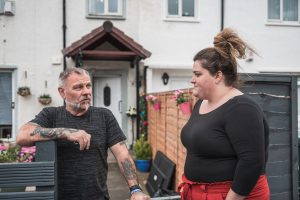 Natasha Davidson talks with a resident of the Niddrie scheme in Edinburgh, Scotland. Photo by Gary Fong/ Genesis Photo Agency.

When people in the U.S. hear the word “scheme,” sneaky hijinks often come to mind. In Scotland, however, this word means something very different. Here, schemes are neighborhoods with a high percentage of government housing. These two- and three-story apartments were built by the local government after WWII in order to provide for the poor. They often become their own little worlds and are populated with large numbers of people officially defined and “income deprived.” The international winner of The Hope Award, 20schemes, seeks to create “charity-infused churches” in twenty such areas.

Director Mez McConnell comes from a similar background to many of the schemers. Abandoned by his mother at the age of 2, he entered into a life of violence and homelessness that was only turned around by an encounter with Jesus after a group of Christians visited him in prison.

Though the houses and apartments often look nice, McConnell explains that many children who live here haven’t had a hot meal in weeks and are surviving on moldy Rice Krispies and milk gone bad. In spite of this, however, there is a sense of community spirit within the schemes. With families living there for generations, they see each other as “their own people.” Crime is bad, but only done to strangers, therefore residents of the schemes leave their doors unlocked and trust each other.

The leaders of 20schemes live in the communities they serve, are not afraid to talk about sin, and emphasize forming a church family. Because many schemers speak about losing friends when they become Christians, this makes church community even more vitally important. 20schemes also has a two-year training program for interns, many of who are residents of the schemes. Some, however, come from different classes and even different parts of the world as well. 20schemes concentrates its efforts on gospel presentation. It is “only a realization of our sin before a holy God that sets us on the road to change,” McConnell says. “Handouts are a detour.”

Courtney Lott is the editorial assistant at Good News. For more information, check out world.wng.org.